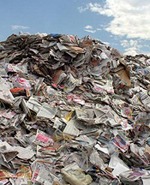 The three primary types of gasifiers (fixed/moving bed, entrained flow, and fluidized bed) with their many commercial or near-commercial examples represent a wide range of gasification applications, and in general focus on coal as a feedstock for electricity, liquid fuel, synthetic natural gas and hydrogen, or chemical production. However, there are some additional applications of gasification utilizing specialized gasifier types or gasification processes. These are generally geared towards utilization of a wider range of feedstocks than just coal, and represent use of gasification in widely different, inventive ways. Some address gasification of materials much different than coal, such as black liquor, biomass and municipal solid waste (MSW); others are developmental gasifiers that are aimed to be able to process not just one particular rank of coal, but any type of coal and other solid materials, in order to confer greater feedstock flexibility in gasification. Others such as hydrogasification aim to produce particular products such as SNG from solid feedstocks. Sections listed below discuss these alternative feedstocks, gasification technologies and special approaches to gasification:

Biomass and Municipal Solid Waste – These feedstocks include diverse types of solid materials varying in characteristics like ash content, moisture content, and bulk density. Gasification options vary from various fluidized and fixed bed gasifiers, to plasma gasifiers. Although straight biomass can be gasified, there is considerable interest in co-gasifying coal with biomass.

Plasma Gasification – A potentially versatile and low-emissions solution to the gasification of a wide range of feed types such as MSW and industrial wastes, biomass, and coal and coal residues.

Aerojet Rocketdyne Gasifier – An interesting developmental application of coal gasification, utilizing technology developed and experience gained from rocket propulsion engines. This offers the potential of a very compact and low-cost gasifier, with high carbon conversion and increased thermal efficiency. This gasifier would be capable of accepting any coal rank as fuel.

HT-L Gasifier – A Chinese-developed, pressurized, entrained, down-flow reactor, reported to be the result of the conversion and extension of aerospace engine technology.

Black Liquor Gasification – The wood pulp and paper manufacturing industry uses the Kraft process to turn wood into wood pulp, which is primarily a water slurry of cellulose, for further processing into a variety of paper products. This process produces a byproduct called black liquor containing the non-cellulose wood residues (lignin, hemicellulose) and Kraft process chemicals (toxic inorganics like sodium hydroxide and sodium sulfide). Black liquor is conventionally burned in recovery boilers, but black liquor gasification provides an alternative capable of producing electricity, steam, and a full-slate of gasification products.

Catalytic Gasification – Catalysts can be applied to the gasifier feed to increase certain gasification reaction rates, and to control the resultant product distribution. In catalytic gasification, catalysts are primarily used to lower the operation temperature of the gasifier which saves energy, wear on the reactor, and heat transfer losses between process units (like syngas clean-up). Catalysts can also be used to favor or suppress certain syngas component formation such as methane.

Oil and Gas Partial Oxidation – Partial oxidation of oil and gas involves reaction of the feedstocks with less oxygen than required for complete combustion, a process that is very similar to solid fuel gasification, but because of the fluid state of the oil or gas some gasification stages like pyrolysis and char gasification either do not take place or take place at a much less significant level. 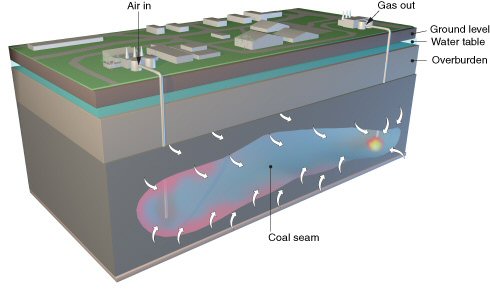 Underground Coal Gasification – In areas where coal is not easily mined, a potentially economically advantageous solution may be to react the coal underground to produce a fuel gas which is captured and brought to the surface. The transformations involved in underground coal gasification are similar to that of surface gasification, except that the coal seam itself becomes the reactor, with gasification taking place underground instead of in a manufactured vessel.