Biomass is a broad term used to describe any organic material or resource which is derived from plant or animal matter, and primarily used as fuel. This includes wood, food crops, grass and woody plants, agriculture and forestry residues, and organic components of municipal and industrial wastes. Biomass excludes organic material which has been transformed via geological processes to fossil fuels such as coal, oil or natural gas.

Biomass can reduce dependence on foreign oil through production of biofuels and provide a boost for agricultural and forest industries by turning low value wastes into high value fuels, fertilizer or chemicals and electricity.

The chemical composition of biomass varies substantially, because of the broad range of materials involved, but the main components are moisture, carbohydrates or sugars, lignin, and mineral matter which becomes ash upon combustion or gasification.

The use of biomass to offset use of fossil fuels can lower greenhouse gas emissions. Burning biomass for energy does create carbon dioxide; however, the same amount of carbon dioxide is recaptured in future biomass growth. So as long as there is no carbon dioxide released into the atmosphere during production of the biomass (growth, harvest, and processing), the process sums to zero net carbon dioxide to the atmosphere. Also, if biomass is left to decompose naturally, or openly burned, a large portion of the carbon in the biomass is converted to methane (CH4). The percent of carbon in the biomass which is converted to CH4 is fifty percent in the case of rotting, and five to ten percent in the case of open burning. These processes are actually worse in regards to greenhouse gas emissions than is biomass gasification, which converts nearly all of the carbon contained in the biomass to CO2, since CH4 is a much stronger greenhouse gas than is CO2.

The following table shows some of the common types of biomass and their chemical and physical makeup and compares them with coal. 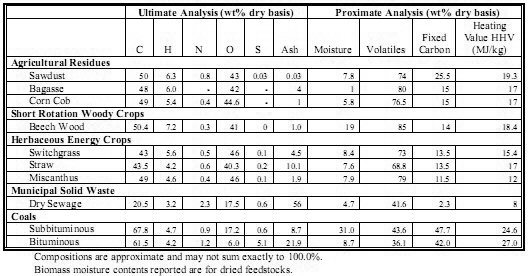 Recognition of the value of biomass to supplement fossil fuel use and offset CO2 emissions is one of the important drivers for NETL's Coal & Coal/Biomass to Liquids Program, which sponsors R&D in technical areas which will increase biomass utilization in gasification and fuels synthesis. Some of the relevant areas of R&D include feeding of biomass to gasifiers, and leveraging biomass to increase hydrogen content of syngas as is required to facilitate efficient fuels synthesis.

Advantages of Biomass Gasification
There are two methods for converting biomass into high value end products: biochemical and thermochemical conversion. Biochemical conversion involves the use of biological processes to convert biomass into biofuels, chemicals and electrical power. In the case of ethanol production, enzymes and/or chemical processes are used to extract sugars from the biomass, which can then be converted to ethanol via fermentation. Thermochemical conversion, either gasification using less than stoichiometric oxygen or pyrolysis (the gasification of biomass in the absence of oxygen), uses heat and pressure to convert biomass to liquid fuels, chemicals and electrical power. Combustion is an option for conversion of biomass to electrical power; however, the syngas produced by gasification is much easier and economical to clean than are the exhaust gases produced by combustion. This results in gasification providing better environmental performance, including a cheaper method of capturing carbon dioxide. In addition, syngas produced by gasification can also be processed into a variety of marketable products, where combustion is limited to electrical production via the steam cycle.

Process Description
Through gasification, biomass is converted into a gas consisting of hydrogen, carbon monoxide, carbon dioxide and other compounds by applying heat and pressure in the presence of steam and a small amount of oxygen, typical of gasification of any organic material. Generally, biomass does not gasify as easily as coal. Biomass produces hydrocarbon compounds in the gas, especially in the absence of oxygen, requiring an extra step to remove them with a catalyst downstream of the gasifier. The water-gas shift reaction is then used to convert some of the carbon monoxide with water to form more carbon dioxide and hydrogen.

Most of the main gasifier types can be designed to handle biomass or a combination of biomass and coal, but each has positives and negatives and the selection depends on the specific feedstock and the desired product or products. More detailed information on the subject of biomass/MSW gasification and co-gasification of coal and biomass is available.

Challenges
A few obstacles exist before biomass gasification can obtain widespread market penetration. First, in the case of oxygen-blown biomass gasification, costs associated with separating oxygen from the air via cryogenic processes are very high, and could be reduced by continuing development of new membrane separation technology. Membranes also hold the potential to lower costs associated with purifying the process gas streams created by gasification. Finally, research on agriculture practices and breeding efforts will increase the efficiency with which these materials can be used for fuel in energy production and in turn decrease and stabilize their cost as well as promote industry standardization of these materials.