Laboratory analysis of slag from the Wabash River gasifier shows it to be a non-leachable, non-hazardous material with regard to inorganic species; since gasifier slag is in a vitrified state, it rarely fails the Toxicity Characteristic Leaching Procedure (TCLP) protocols for metals. Various feedstocks (lignite, subbituminous coal, bituminous coal, and petroleum coke) processed through the E-Gas™ gasification process have consistently demonstrated a non-hazardous classification based on TCLP (total) test results. Since slag is not a good substrate for binding organic compounds, it is usually found to be non-hazardous, exhibiting none of the characteristics of a hazardous waste. Consequently, it may be disposed of in a non-hazardous landfill, or sold as an ore for metals recovery. Slag’s hardness also makes it suitable as an abrasive or roadbed material, as well as an aggregate in concrete formulations. Further evidence of the long-term stability of this material is supported in an EPRI publication entitled Long-Term Leaching Tests with Coal Gasification Slag 1.

In contrast with integrated gasification combined cycle (IGCC), the amount of solid waste discharged from direct coal combustion can increase by a factor of 2 to 3 with the use of throw-away desulfurization systems and high-sulfur coals. Coal gasification avoids this problem totally by recovering the fuel’s sulfur as a pure byproduct that is readily marketable, or can be synthesized into marketable sulfuric acid. Most direct coal combustion processes recover the sulfur as wet scrubber sludge or a dry or semi-dry spent sorbent, or gypsum. These forms of sulfur have significantly larger mass and volume than pure sulfur. Furthermore, they are more difficult to handle, market2, and dispose of.

Wabash River IGCC Plant3
Solid byproducts from the gasification process at the Wabash facility primarily consist of gasifier slag, entrained particulate in the syngas exiting the gasifier, and elemental sulfur. The slag from the gasifier is removed in a water slurry and directed to a dewatering system. The dewatered slag is loaded into a truck or railcar for transport to market or a storage site. Clear water from the settled slurry is returned to the gasifier quench section and the slurry of fine particulates from the bottom of the settler is recycled to the slurry preparation area. The entrained particulates are collected from the cooled syngas and recycled to the gasifier. The slag produced is a black, glassy sand-like material, containing 3-10% unconverted carbon, and is marketed for asphalt, construction backfill, and landfill cover applications.

Polk IGCC Plant4
Similar to the Wabash facility, solid wastes from gasification at Tampa Electric Company's Polk Station in Mulberry, Florida, consist primarily of gasifier slag and entrained particulates in the syngas. In the gasification system, coarse solids and some fine solids are flushed from the radiant cooler into a concrete slag-dewatering bin. The slag undergoes a “beneficiation” process at this point, which involves separating and processing the slag into separate size components and ensuring they are of acceptable quality for their respective end uses. One such beneficiation process was developed between Charah Environmental, Inc.and and the University of Kentucky Center for Applied Energy Research (CAER), and has been in use at the plant.

The Polk Station beneficiation plant began construction in 2001, and was fully operational by spring 2002. Designed for a feed capacity of 100 tons per hour (tph), the original operating procedure involved blending 200 tpd of generated slag with a minimum 600 tpd of stockpiled slag byproduct. By spring 2004, the 140,000 tons of stockpiled byproduct was processed.

The processing plant uses a mesh separation system to classify the slag into three distinct products, from coarsest to finest:

Currently the fuel (-20+100) and fines (-100) are combined and recycled back to the gasifier as supplemental fuel. This reduces fuel consumption, increases carbon usage efficiency, and, perhaps most importantly, eliminates the need to landfill over 70% of generated by-product.

The dewatered slag product is loaded into trucks for offsite use or onsite storage. Water removed is pumped to the gasification process black water handling and processing system. The temporary storage units are designed to provide for up to five years of waste from the IGCC unit operating at 100-percent capacity. The slag storage area includes a storm water runoff collection basin and surrounding berm to prevent runoff from entering the area. Both the slag storage area and runoff collection basin are lined with a synthetic material or other materials with similar low permeability characteristics. The runoff basin is designed to contain runoff water volumes equivalent to 1.5 times the 25-year, 24-hour storm event. Water collected in the runoff basin is routed to the industrial wastewater treatment facility.

Particulate removal from the syngas is collected as slurry and processed in the blackwater handling system. The solids from the slurry are stored at an onsite brine storage area, a lined landfill with a leachate collection system. A small amount of non-hazardous sorbent fines are collected in a high efficiency barrier filter and are sent offsite for disposal. Larger fines are sieved on screens, and fugitive fines are collected in filter bags and recycled to the catalyst supplier. All blackwater from the gasification and syngas cleanup process is collected, processed, recycled to the extent possible, and contained within the process. The separated water is recycled for slurrying the coal feed.

A by-product handling issue reported at the Polk plant is related to the ash/char recycle stream.
Polk’s GE Energy-type gasifier generates char that is mixed with a very fine glassy frit, which requires separation prior to re-injection. The separated frit must be washed with clean water before it can be disposed of economically or used commercially. However, this process water must then be treated to remove contaminants, which increases water consumption and treating costs5.

Another byproduct issue at the Polk plant deals with slag disposal. Although the slag is classified as non-hazardous, local regulations require disposal in a different class of landfill. Polk must use a Class I landfill that is double-lined with leachate extraction/control versus a much less expensive and more available Class III landfill. The difference in disposal cost between the two is about $20/ton.

Kemper County IGCC6
Kemper County IGCC is based on TRIG™ gasification, which results not in slag but in gasification ash, which is about 100 microns in diameter, has a carbon content typically less than 3 percent, and looks similar to a dark colored sand. The gasifiers would produce approximately 25 tph of this material. Also, filter system particulate would be produced, which is finer than the gasifier solids (typically around 20 microns), having a carbon content of approximately 15 to 20 percent; it would have a dark gray to black appearance with the consistency talcum powder. The flow rate of this particulate would be approximately 50 tph. Based on an 85-percent capacity factor, approximately 560,000 tons of ash would be produced annually. Water would be added to the solids as necessary for dust control prior to being transported by truck to the ash management unit located in the northern portion of the Kemper IGCC plant site.

The ash would be classified as industrial/special waste in the state of Mississippi, and the ash management unit would be subject to the permit requirements and regulations of Mississippi Department of Environmental Quality (MDEQ). To reduce long-term ash storage needs, Mississippi Power will try to market ash for beneficial use in industrial processes such as building roads, soil amendment, or for other uses as approved by MDEQ.

Ash samples were collected from gasification tests conducted at the pilot-scale transport gasifier at the Power Systems Development Facility near Wilsonville, Alabama. These tests used a lignite feedstock mined from the Wilcox Group at the Red Hills, Mississippi, mine, which is expected to be similar to the lignite that would be produced for the proposed IGCC project. Although the ash generated in these tests involved lignite from a different mine and a pilot-scale gasifier, it is the most representative material available. Tests of these ash samples indicate that the gasification ash would meet toxicity requirements for nonhazardous material. There is no expectation that the ash would be ignitable, corrosive, or reactive. Therefore, the ash would not be classified as hazardous. Table 4 summarizes the results of the test gasification ash characterization, showing the compliance of the ash with regulatory limits. 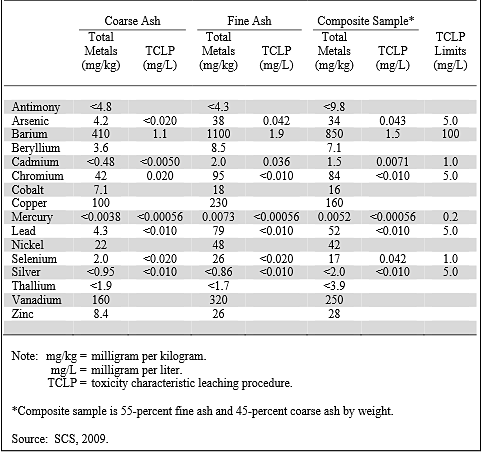