Gasification is a known method for converting petroleum coke (petcoke) and other refinery waste streams and residuals (vacuum residual, visbreaker tar, and deasphalter pitch) into power, steam, and hydrogen for use in the production of cleaner transportation fuels. The main requirement for a gasification feedstock is that it contains both hydrogen and carbon. Below is a table that shows the specifications for a typical refinery feedstock. 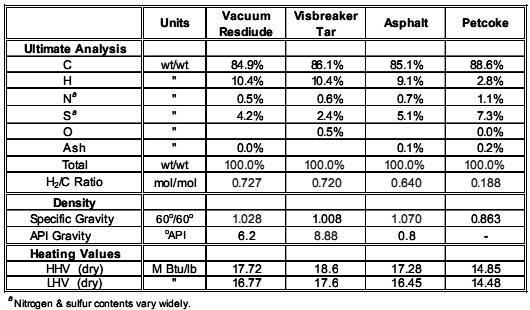 A number of factors have increased the interest in gasification applications in petroleum refinery operations:

The typical gasification system incorporated into the refinery consists of several process plants including feed preparation, the gasifier itself, an air separation unit (ASU), syngas cleanup, sulfur recovery unit(SRU), and downstream process options depending on the desired products. The diagram below shows a typical arrangement of these process plants in addition to the optional downstream processes for producing power through cogeneration, hydrogen, Fisher-Tropsch synthesis, or methanol synthesis. 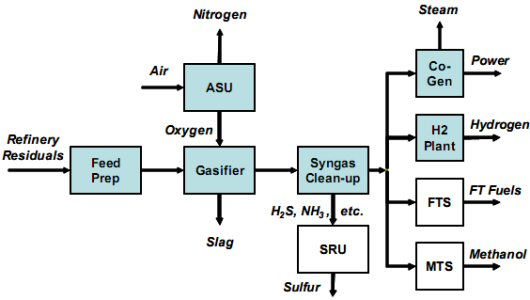 The benefits to a refinery for adding a gasification system for petcoke or other residuals are:

Gasification can provide high purity hydrogen for a variety of uses within the refinery. Hydrogen is used in the refinery to remove sulfur, nitrogen, and other impurities from intermediate to finished product streams and in hydrocracking operations for the conversion of heavy distillates and oils into light products, naphtha, kerosene and diesel. Hydrocracking and severe hydrotreating require hydrogen which is at least 99% pure, while less severe hydrotreating can use 90% pure hydrogen and above. Refineries typically require hydrogen availability 95% of the time.1

Electric power and high pressure steam can be generated by the gasification of petcoke and residuals to drive mostly small and intermittent loads such as compressors, blowers, and pumps. Steam can also be used for process heating, steam tracing, partial pressure reduction in fractionation systems, and stripping low-boiling components to stabilize process streams.

Oxygen generated for use within the gasifiers can also be used combustion systems within the plant, while nitrogen, the byproduct of oxygen production in the ASU, can be used for purging and blanketing plant equipment.

Based on a 2003 study by NETL, savings associated with the implementation of a gasification system could be dramatic. The following table gives rough estimates for savings in 2003 U.S. dollars by process area.