The foregoing discussion related to power generation scenarios. When coal gasification is the basis for production of hydrogen or ammonia, water usage is expected to change as a function of the many process differences between power generation and fuels, chemicals, or fertilizer synthesis.

NETL recently compared cost and performance of commercial technologies for hydrogen production from fossil fuels. The cases included natural gas reforming, as well as coal/biomass gasification-based hydrogen production with and without carbon capture. Analyses included a water balance for each case, in which raw water withdrawal, process discharge, and raw water consumption were quantified and compared. The results are provided in the figure below: 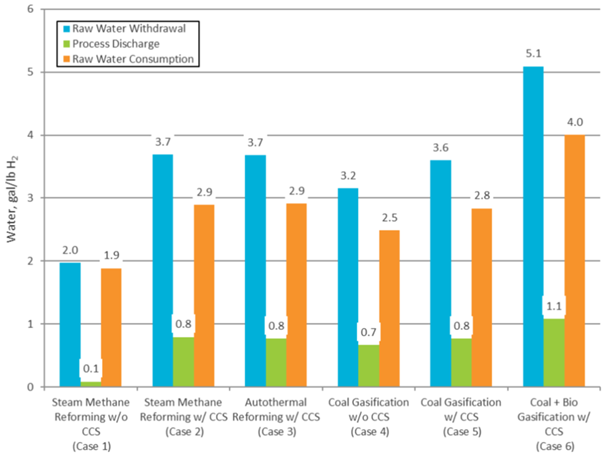 The following key observations were made:

Notwithstanding the higher water consumption of coal/biomass gasification with capture compared to conventional natural gas reforming for ammonia synthesis, a water consumption advantage over renewable ammonia should persist for all fossil fuel options.

Biomass Gasification and Water Use
Although IGCC is the application of gasification for which water use is most significant, the technology can offer water use advantages in some biomass energy applications. Biomass power plants have similar water use characteristics to coal plants. In addition, in some industrial processes, particularly in the paper and sugar industries, gasification can replace combustion technologies. The technology allows for the conversion of both biomass solids and black liquor into a gas that can fuel various processes or turn a gas turbine to provide electricity.