2.3. Coal to Liquids and Water Use

Water Usage/Consumption for Coal to Liquids
Production of liquid transportation fuels from coal & biomass requires significant amounts of water, for three major purposes: 1) process cooling demands in coal conversion will often be met by wet evaporative cooling, which is associated with consumption of water through evaporation just as experienced in coal-based thermoelectric power plants, 2) water is consumed as the source of hydrogen necessary for transforming carbon-rich coal into liquid fuels having much higher hydrogen to carbon ratios than the coal, and 3) solids handling and dust control makes demands on water in mining operations, materials handling operations, ash disposal, etc. Table 1 shows the magnitude of water use by Sasol in South Africa for its mostly coal gasification-based liquid fuels production. Although these are aggregate numbers for all of Sasol’s production of a wide range of products, liquid fuels are the bulk of that production, so water use can be roughly correlated. For the most recent year, a total of about 25,000 tons of fossil fuel feedstocks were converted to about 24,000 tons of products, using about 147,000 tons of water. Therefore, the ratio of water use to product is approximately 6 to 1 by weight, or about 5 to 1 by volume assuming average product density is the typical diesel fuel density of 0.83kg/l. To put these numbers into perspective, total water consumption is about 1 to 2.5 gallons of water for every gallon of product for the typical oil refinery.

These approximate ratios are consistent with guidelines given in other estimates1, which have figured that water use at hypothetical coal to liquids (CTL) plants could vary from 1-1.5 barrel of water per barrel of product for a zero-discharge air-cooled plant, to 5-7 bbl water per barrel of product for a plant with water cooling and less use of waste heat for process heat or cogeneration (Sasol uses primarily water cooling).

The marked difference between water use in air-cooled CTL vs. water-cooled CTL underscores the fact that water use in liquid synthesis plants utilizing conventional water cooling is by far the most significant use of water in that process scenario. Intrinsic water consumption as the source of hydrogen (2nd type mentioned) and solids liquid and handling (3rd type mentioned) as enumerated above cannot be reduced in CTL, but water for cooling (1st type mentioned) can be reduced through different strategies for process cooling water management. Therefore, substantial reduction is possible in the area of highest water use, translating into significant impact overall.

Process Cooling Water Management
Much of the United States’ domestic coal, especially low-rank coals and low-sulfur sub-bituminous coal, is located in the arid West where water resources are already strained. This makes the prospect of large-scale coal to liquid fuels conversion all the more challenging from a water usage standpoint. This is underscored by recent NETL sponsored analysis examining production of zero sulfur diesel fuel from domestic coal, specifically sub-bituminous coal which is generally found west of the Mississippi in the Powder River Basin (PRB). In certain cases examined in this analysis, CTL facilities using the PRB coal are assumed to be located in Montana where water resources would be scarce, requiring tight water management. Accordingly, three different strategies for process cooling water management were evaluated: (1) wet cooling using mechanical draft evaporative cooling towers; (2) hybrid cooling in which a closed loop, air-cooled condenser is utilized to condense steam exiting the low-pressure turbine – reducing evaporative cooling load and therefore water losses– and the remainder of the cooling needs are met through the use of mechanical draft evaporative cooling towers similar to those used in the first strategy; and (3) dry cooling in which air is blown through a dry-cooling tower to remove heat from a closed water loop, and the only water losses in the process cooling system are those associated with blow-down to maintain water quality. This provided quantitative insights into impacts water use reduction would have on the performance and economics of the facility.

All the cases in the study assumed Siemens entrained flow gasification with full water quench to produce raw synthesis gas from the coal feed. Conventional cold gas cleaning was assumed for sulfur removal and recovery and for bulk carbon dioxide (CO2) removal. Fuels synthesis using low temperature Fischer-Tropsch (FT) slurry phase reactor technology with iron based FT catalysts was also assumed. In "once-through" cases, clean syngas is passed through the FT reactors one time only with unconverted syngas and light hydrocarbons sent to gas turbines for power generation, creating a large quantity of power as a co-product. In "recycle" configurations, most of the unconverted syngas and light hydrocarbons are recycled back to the FT reactors (after CO2 removal) to increase liquids production; in these there is less co-produced power.

Table 2 provides the results of certain cases evaluated in the study, namely those that assumed utilization of sub-bituminous coal without added biomass.

First, the numbers for water usage in terms of barrels of water per barrel of product here again clearly show the significant difference in water use which ranges from relatively low for dry cooling to relatively high for wet cooling. However, examining other parameters such as process efficiency, costs and prices associated with produced liquids shows the penalties and higher prices that occur in reduced water use scenarios. Accordingly, the tradeoff between water savings and higher costs of products must be carefully considered in CTL process evaluations.

Direct CTL
In the discussion above the fuels synthesis is indirect, based on coal gasification followed by Fischer-Tropsch synthesis. Direct CTL is a significantly different process approach, but both indirect and direct coal liquefaction require water for the same reasons, i.e. from demands for process cooling, hydrogen demand, etc. However, in theory the higher intrinsic efficiency of direct CTL should correlate with somewhat lower water consumption. 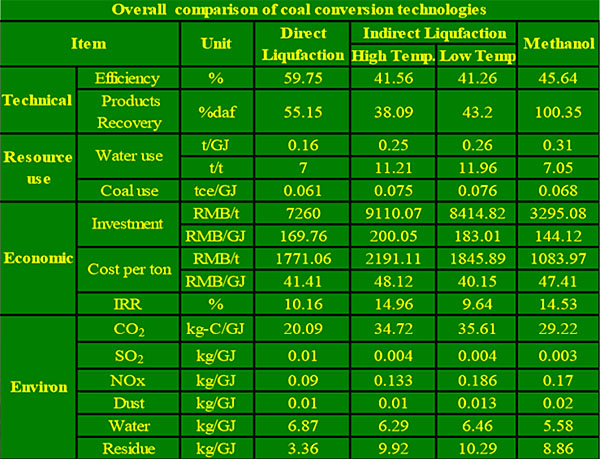 Industrial Practice: Reduction of Water Use at Sasol
Sasol has pursued various initiatives in recent years at its coal conversion plants in South Africa, where water scarcity is of particular concern, with the aim of ensuring improved water use efficiency and ensuring greater security of supply. Substantial investment was made in a series of water-treatment processes to recover existing effluent, as part of major expansions at the Sasol Synfuels operation undertaken primarily to meet new fuel specifications. The result was no additional water demand notwithstanding the process expansions, along with a reduction of effluent discharged to the environment.

At Secunda, Sasol added a wastewater treatment plant, a bioremediation center, and a solidification plant to handle designated waste streams. Oil is recovered from wastewater (consisting of gasification effluent, reaction water, and oily sewer water from an API oil/water separator), which undergoes chemical as well as biological (fixed film and activated carbon) treatment, filtration, and chemical oxidation steps to achieve desired treated water quality. The treated water from this unit is sent to Secunda cooling water make-up (the bulk of these treated effluents is used in this way) or ash water make-up if it is not suitable for cooling water make-up. The main concern regarding the quality of treated water is a high level of salts originating from the chemical cleaning waste streams that are treated in the wastewater plant.

These improvements in wastewater management are consistent with a zero liquid effluent design approach.