Fossil fuels such as coal contain sulfur in two inorganic forms, pyritic sulfur (FeS2) and sulfates (Na2SO4, CaSO4, FeSO4), and organic forms such as sulfides, mercaptans, bisulfides, etc. Typically coal contains anywhere from 0.2 to 5 percent sulfur by dry weight. During high-temperature gasification of coal (or other applicable solid fuels), most of the sulfur constituent is released and converted to hydrogen sulfide (H2S), as well as a small amount of carbonyl sulfide (COS), due to the reduced oxygen environment. H2S and COS (which along with carbon dioxide [CO2] are called acid gases) are mostly removed from the syngas in the acid gas removal equipment prior to combustion in gas turbines or other forms of fuel conversion (e.g., fuel cell) for electricity production or conversion to other products such as liquid fuels or chemicals.

Acid gas removal equipment extracts from 95% to greater than 99% of the H2S and COS, once hydrolyzed, from the fuel gas and converts it to a salable sulfur or sulfuric acid byproduct. The small amount of residual sulfur that remains in the syngas is converted to SO2 in the combustion turbine and released to the atmosphere in the HRSG stack gas. Other secondary sources of SO2 emissions in an IGCC plant will typically include the sulfur recovery system’s tail gas incinerator stack, auxiliary boilers (if applicable), and the syngas flare during gasifier startup and system upset conditions. These secondary SO2 sources are typically significantly smaller than the HRSG stack emissions.

SO2 Effects
SO2 causes a wide variety of health and environmental problems due to its reactivity with other airborne substances. Among these are:

SO2 Emissions
Operating U.S. commercial IGCC plants Polk and Wabash River both achieve total SO2 emissions below 0.15 lb SO2/106 Btu heat input (< 1.3 lb/MWh for 8,600 Btu/kWh heat rate) or greater than 97% sulfur reduction. Edwardsport IGCC will also have very low SO2 emissions from the combustion turbines/HRSG at only about 5% of the 0.15 lb SO2/106 Btu heat input limit specified in its Class V Air Permit under the New Source Performance Standards (NSPS).

In general, current IGCC technologies reliably provide nearly an order of magnitude reduction in SO2emissions compared with their conventional pulverized coal combustion counterparts. The graph below compares typical gasifier types in use for commercial power production to PC based generation, showing the superior environmental performance of gasification in terms of SOx emissions. 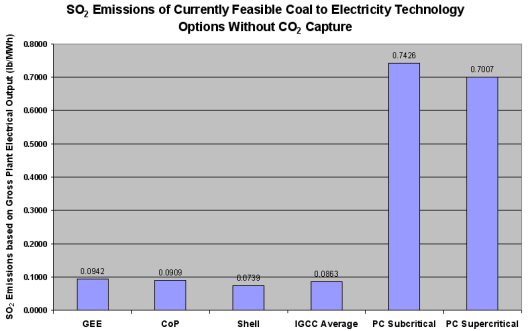