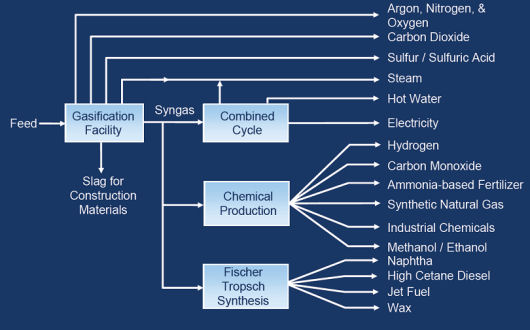 Cogeneration or coproduction in the context of gasification refers to the ability for a gasification plant to vary the downstream processing of the produced syngas depending on market conditions, in order to optimize profits. For example, an owner of an integrated gasification combined cycle (IGCC) power plant might add additional parallel process streams which process the syngas into chemicals or liquid fuels given a situation of decreased electricity prices and increased chemicals/fuels prices. As the figure shows, there are many options for various marketable products that can be produced from syngas.

The flexibility of having multiple processing options for the syngas allows a plant to alter its product slate to meet changing market conditions. Conceivably, a plant could produce electricity during peak electrical cost hours, and then transition to other products that could provide more favorable return for an equivalent amount of syngas in the non-peak hours. In addition, having more than one downstream processing option for the syngas may provide some benefits in terms of plant maintenance schedules and preventing outages. However, the ability to rapidly transition between primary products has not yet been demonstrated at a commercial scale.1

Cogeneration can also be viewed from a process standpoint as a means for optimizing usage of the fuel(s) at a gasification facility. For example, a coproduction plant including IGCC power cycle and Fischer-Tropsch fuels plant, using only coal as a fuel, is inefficient because the gas turbines cannot be run at maximum (and most efficient) output while syngas is diverted to the Fischer-Tropsch processes. Studies have shown that using natural gas to replace this syngas diverted for fuel production would keep the gas turbines producing electricity at maximum capacity, thus optimizing the use of both fuels and providing economical, environmental, and process advantages compared to two separate facilities.

There are several challenges to the co-generation market realizing its full potential. In addition to the challenges of gasification itself, commercial scale experience with this type of facility is needed. Despite the fact that both IGCC and Fischer-Tropsch and other syngas processing technologies are proven technologies on their own, companies in different sectors of business may not have experience with all technologies present in a representative coproduction plant. For example, a utility company or independent power producer interested in building an IGCC facility might not have enough Fischer-Tropsch processing experience or familiarity with liquid fuels markets to be confident in investing in this particular process combination.

Despite these barriers, there are gasification facilities currently taking advantage of producing multiple products. The Great Plains Synfuels Plant is an example where gasification of low rank coals is used to produce both synthetic natural gas and anhydrous ammonia.