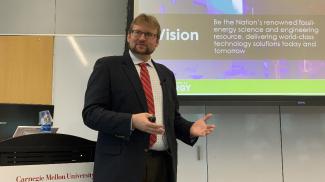 The Carnegie Mellon Wilton E. Scott Institute for Energy Innovation addresses the world’s most important energy-related challenges by enabling collaborative research, strategic partnerships, public policy outreach, entrepreneurship, and education. As one of CMU’s only university-wide institutes, the Wilton E. Scott Institute for Energy Innovation seeks to optimize energy resources, reduce the environmental impacts of energy production and use, and develop breakthrough technologies and solutions that will have meaningful global impact.

NETL is a U.S. Department of Energy (DOE) national laboratory that develops technological solutions to America’s energy challenges. For more than 100 years, NETL and its predecessor organizations have been recognized for innovation, discovery, development, and deployment of fossil fuel technologies.

Anderson described how NETL’s mission focuses on discovering, integrating, and maturing technology solutions to enhance the nation’s energy foundation and protect the environment for future generations, and follows a robust vision that will continue to power the nation’s economic progress, ensure its security, and enhance national prosperity. He noted that fossil energy remains critical for all sectors of the U.S. energy economy, providing 92 percent of the energy used in commercial and residential activity, 95 percent of transportation needs and 60 percent of the nation’s power requirements.

The lecture also highlighted pioneering, state-of-the-art energy R&D and fossil energy and crosscutting initiatives that bring together multidisciplinary teams to meet some of the nation’s most important energy challenges.

NETL’s 1,234 employees conduct and support more than 900 research and development projects in 50 states in it facilities in Pittsburgh, Morgantown, West Virginia, and Albany, Oregon. He also explained how the Laboratory executes research missions that draw on its key competencies: computational science and engineering; materials engineering and manufacturing; geological and environmental systems; energy conversion engineering; systems engineering and analysis and program execution and integration.

Attendees were told that the Laboratory’s fossil energy priorities include:

He also highlighted how NETL bridges gaps between early stages of science and discovery and the final stage of commercial deployment by the private sector by developing productive partnerships that help reduce financial risks and shorten times to commercialization for new technologies.

Anderson manages the complete NETL complex, including delivery and execution of the Laboratory’s mission and national programs in fossil energy. He has a long history of collaboration with NETL and other DOE national laboratories. He served NETL as the coordinator of the International Methane Hydrate Reservoir Simulator Code Comparison study. In 2011, he was awarded a Secretary Honor Achievement Award from the Secretary of the Department of Energy for his role on the Flow Rate Technical Group, a team spanning multiple national laboratories that worked in response to the Deepwater Horizon oil spill.  Anderson came to NETL from West Virginia University (WVU) where he served as the director of the WVU Energy Institute.

Anderson is also a recipient of the 2012 Presidential Early Career Award for Scientists and Engineers, the highest honor bestowed by the U.S. government on science and engineering professionals in the initial stages of their careers. He served as a member of the National Academies of Sciences, Engineering, and Medicine (NASEM) Roundtable on Unconventional Hydrocarbon Development.

He earned his bachelor’s degree in chemical engineering in 2000 at WVU and his master’s and doctorate in chemical engineering from the Massachusetts Institute of Technology (MIT) in 2004 and 2005 respectively. Anderson’s research interests include molecular, reservoir, and multiscale modeling and simulation applied to energy and biomedical systems.