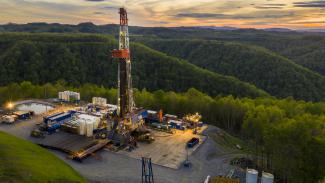 An NETL-supported project has provided researchers with core samples and other valuable subsurface data to assess natural gas resources in deep untapped reservoirs in Central Appalachia and evaluate potential extraction methods that would leave a light environmental footprint while creating needed jobs in a region significantly impacted by the downturn in the coal industry.
The Central Appalachian region (southern West Virginia, southwestern Virginia and eastern Kentucky) is known for hydrocarbon resources such as coal, but it is also home to abundant unconventional gas resources, including coalbed methane, shale gas and other low permeability natural gas and oil formations.
Many of these gas resources are vertically stacked so that a single well drilled to a depth of 15,000 feet could produce simultaneously from multiple reservoirs located at various depths throughout the rock strata. The goal of NETL’s Emerging Stacked Unconventional Plays (ESUP) project is to investigate and characterize the resource potential for multi-play production in these emerging unconventional reservoirs.

In June, the project team, which includes NETL partners from academia and industry, completed a characterization well in Wise County, Virginia. Drilled to a depth of 15,155 feet, the well was used to collect samples of rock core, fluids and a wealth of geophysical data. The well provides comprehensive data to improve the understanding of the geology and resource potential of the Cambrian Rogersville Shale Formation, as well as other deeply buried formations.
“The project now shifts gears as work begins to analyze the samples and the copious amounts of data collected, and determine the feasibility and completion strategies to tap these deep formations, which are called emerging plays because they are largely unexplored, using innovative techniques designed to leave a light footprint on the environment,” said John R. Duda, associate director, Oil and Gas, Technology Development & Integration Center, NETL.
Duda maintains the project represents an opportunity to understand how to better navigate exploration and potential development of these emerging plays with minimal environmental impact while generating maximum socioeconomic benefits.
“Wise County, like so much of Central Appalachia, has been hard hit by the downturn of the coal industry,” Duda said. “The drilling of this well will enable us to better understand deep gas-bearing rock formations that could attract natural gas producers and bring high-paying jobs back to local communities.”
While generating jobs is a priority, so is the need to protect the environment. Central Appalachia is a region of stunning natural beauty. According to The Nature Conservancy, a global environmental group based in Alexandria, Virginia, Central Appalachia has some of the highest recorded levels of biodiversity in the eastern United States, as well as some of the world’s best remaining examples of diverse, intact and connected temperate forests and freshwater streams.
“As we move forward, a single well may be capable of extracting resources from multiple stacked reservoirs, reducing the operation’s surface and environmental footprint, infrastructure requirements and development costs,” Duda said.
The 4½-year project, which is scheduled for completion in September 2022, has received more than $8 million in U.S. Department of Energy funding. NETL’s partners on the project are the Virginia Center for Coal and Energy Research at Virginia Tech and EnerVest Operating, LLC.
Drilling of the characterization well began this spring when a large triple rig was mobilized from Monongalia County, West Virginia, to the field site. Access road upgrades were necessary to accommodate the large rig. Coring and logging of the well occurred the week of June 7. Casing was successfully run to total depth and cemented on June 15, wrapping up field operations associated with the project.
The team drilled through dozens of layers of clay and sedimentary rock until it reached basement granite. The drilling operation successfully collected 90 sidewall core samples and other data at multiple depths that will be analyzed to improve characterization of the multiple emerging unconventional pay zones that exist in the Nora Gas Field, which includes the Rogersville formation.
Duda said many of the core samples have been sent to the NETL geoimaging center in Morgantown, West Virginia, where researchers use sophisticated technology, including computerized tomography (CT) scanners and a multi-sensor core logging unit, to gain insights into the physical characteristics and elemental composition of rock formations and determine how gas and fluids move through rock pores and fissures.
“Such analysis and reservoir modeling that we undertake at NETL are essential to evaluating the production potential of unconventional gas resources and developing research-driven and industry-proven best practices to prudently develop these resources,” Duda said.
The U.S. Department of Energy’s National Energy Technology Laboratory develops and commercializes advanced technologies that provide reliable and affordable solutions to America’s energy challenges. NETL’s work supports DOE’s mission to advance the national, economic and energy security of the United States.