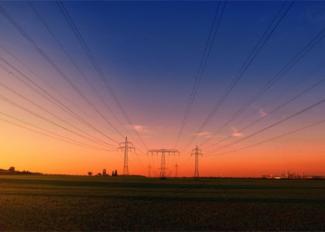 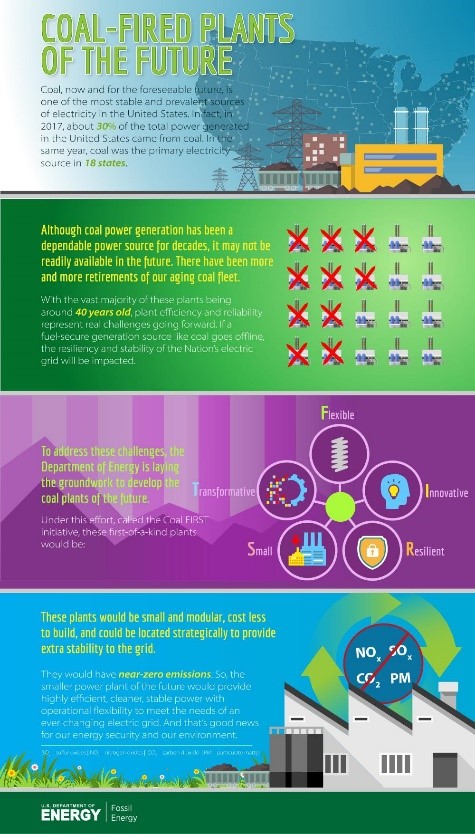 As one of the nation’s most stable and prevalent sources of electricity, coal has reliably powered the country for more than 100 years and will continue to be an important part of the U.S. energy mix for the foreseeable future. However, the nation’s coal-fired power plant fleet has faced increasing retirements in recent years, threating the long-term viability of this critical energy source. The U.S. Department of Energy (DOE) and NETL are working to overcome these challenges by laying the groundwork to develop the coal plants of the future through DOE’s Coal FIRST (Flexible, Innovative, Resilient, Small, Transformative) initiative.

Coal plants developed as a result of Coal FIRST would be modular and smaller than traditional plants, cost less to build and could be located strategically to provide extra stability to the grid — all with near-zero emissions.

NETL is taking major steps toward fulfilling the vison of the Coal FIRST initiative by partnering with industry and academia. This strategy included issuing a request for proposals (RFP) in December 2018 seeking conceptual designs for coal-based power plants of the future, with an option to conduct preliminary front-end engineering (pre-FEED) studies. As a result of the RFP, DOE’s Office of Fossil Energy selected 13 conceptual design studies in April 2019 that were submitted by 11 different recipients as part of the first phase of the effort. Of these 13 conceptual design studies, seven were selected for funding to proceed in October 2019.

These studies represent a wide range of approaches to support the Coal FIRST initiative, which is advancing coal power generation beyond today’s state-of-the-art capabilities and making coal-fired power plants better adapted to the evolving electrical grid. Descriptions of the seven pre-FEED studies can be read here.

The pre-FEED studies were used to inform specific areas of interest for two new funding opportunity announcements (FOAs) to be issued in 2020.

The first FOA will be titled “Design Development and FEED Studies for Coal FIRST Systems” and is anticipated to be issued later in fiscal year 2020. The announcement will support cost-shared R&D projects focused on performing FEED studies for the Coal FIRST plant, with allowances for limited design development.

The second FOA is anticipated to be titled “Critical Components for Coal FIRST Power Plants of the Future” and will support cost-shared R&D projects focused on developing the critical components required by Coal FIRST systems.

These projects will help support the Coal FIRST initiative by integrating R&D on critical power plant components with currently available technologies into a first-of-its-kind system. Through innovative technologies and advanced approaches to design and manufacturing, the initiative will look beyond today’s utility-scale power plant concepts (e.g., base-load units) in ways that fit with the electrical grid in the United States and abroad while employing the most advanced technologies aimed at protecting the environment.