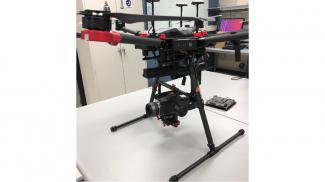 The U.S. Department of Energy (DOE)’s National Energy Technology Laboratory (NETL) is expanding its work with the Southwest Research Institute (SwRI) of San Antonio, Texas, to develop the next generation of methane leak detection technology combining remote sensing and artificial intelligence capabilities in a system that can operate from an aerial platform — an approach that can more effectively help alleviate methane emissions from multiple operations in the natural gas industry.

The objective of the new research is to develop an airborne, autonomous, real-time leak detection technology that applies machine learning techniques to passive optical sensing modalities to mitigate emissions through early detection.

NETL has supported SwRI work on the Smart Methane Emission Detection System (SLED/M) since 2016, and key progress has been made on a system that monitors various regions of a gas pipeline facility and interacts with natural gas mitigation technologies. However, so far, SLED/M has been land based.

According to NETL’s Joseph Renk, an additional task was recently added to a cooperative agreement with SwRI (DOE Project DE-FE-0029020 “Smart Methane Emission Detection System Development”) to develop technologies allowing the leak detection system to operate from an aerial platform or drone.

NETL Director Brian Anderson said there is accelerating interest from the natural gas industry in the new technology because of its ability to detect methane that might otherwise go undetected by the current state-of-the-art optical gas imaging equipment now used.

“This is an attractive option to industry not only because it is proving more efficient, but also because having a system that is mobile and capable of monitoring multiple facilities and miles of pipelines in a day saves significant operational and non-recurring costs,” Anderson said. “There is a clear need for a solution that is autonomous, safe, non-intrusive, timely, and capable of operating from an aerial platform such as a drone.”

Existing methane detection technologies have deficiencies including high false alarm rates. They also require operators to process the data in real-time or in post-process. The SLED/M approach, combining remote sensing and artificial intelligence technologies, has demonstrated low false alarm rates and a reduction in both response time to leak detection and operational costs. In addition, the approach does not require a human in the loop, which minimizes error. SLED/M is a non-intrusive passive technology meaning there is no need to retrofit existing equipment and facilities, eliminating safety and operational restrictions.

Under the new work, SwRI will perform testing, collect data and develop a machine learning-based methane detection algorithm to detect leaks from a drone using the existing SLED/M components.