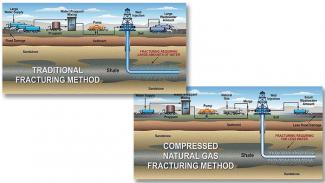 Hydraulic fracturing involves injecting high-pressure fluid underground to create and enlarge cracks that provide pathways for natural gas recovery. Hydraulic fracturing fluids comprise mostly water, and stimulating a single well can require as much as 11 million gallons of water. Some of that fluid is permanently lost underground, while the recovered water, known as flowback, must be disposed of or treated. Often, the water used during the process must be transported to and from the well site, which contributes to traffic, vehicle emissions and inevitable wear on area roadways.

DOE is investing approximately $1.36 million to extend an ongoing research project with Southwest Research Institute (SwRI) and Schlumberger, bringing the total value to more than $3.3 million. The work focuses on using the natural gas produced from a well to create a foam that will serve as the base hydraulic fracturing fluid.

A foam is formed by trapping pockets of gas within a liquid. For instance, whipped cream is made by incorporating air bubbles into heavy cream. Natural gas foam is created in a similar manner, by pressurizing the gas and combining it with a liquid – in this case, a significantly reduced amount of water. Research performed to date indicates that natural gas-based foam shows promising potential as an affordable alternative to water-based hydraulic fracturing fluids.

Foams made from nitrogen and carbon dioxide have been used effectively in the oil and gas industry for decades. Experiments show that natural gas-based foams are suitable for use in fracturing operations, and SwRI studied six methods to create a high-pressure foam on site using natural gas available at the wellhead. A compression cycle process — which involves using multiple stages of compression equipment to incrementally raise natural gas pressure from 500 pounds per square inch (psi) to 10,000 psi — proved most effective based on efficiency, safety and footprint.

Future work will focus on developing modular processing equipment that can produce injection-ready natural gas foam at well sites, as well as perfecting the foam fluid for optimal performance and determining when and where foam is most effectively used.

Researchers are also investigating whether natural gas foams could boost recovery from unconventional wells, which is limited to about 10 percent using existing technologies. Replacing water-based fracturing fluids with natural gas-based foam will likely decrease formation of emulsion and lessen clay swelling, which should aid production by reducing blockages and improving gas flow.