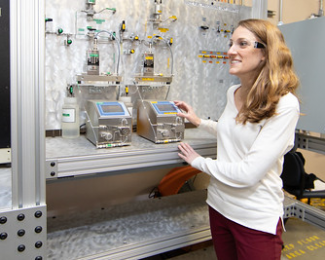 NETL’s Microwave Ammonia Synthesis (MAS) process is a physics and chemistry trailblazer with the potential to meet the needs of the economy and lower the nation’s carbon footprint in chemicals production.

One of the most widely used chemicals compounds worldwide, ammonia is largely used in the fertilizer market. Liquid ammonia also possesses all the desired properties for carbon neutral liquid fuels, which allow power generation without carbon dioxide (CO2) emissions, making it a valuable commodity for sustainable energy. Because ammonia is a hydrogen carrier it is expected to play an increased role in hydrogen-powered systems as efforts to decarbonize the energy sector ramp up in coming years.

For more than a century, the Haber-Bosch process has been the standard method to produce ammonia in bulk. However, this process functions at high pressures and temperatures and requires a constant supply of energy, which equates to higher operational costs and increased emissions of CO2.

In contrast, the MAS process developed by NETL in partnership with West Virginia University and Malachite Technologies operates at near ambient pressures and is not dependent on a continuous supply of power because only a small area is heated during the process via microwave reactions. The Haber-Bosch process, on the other hand, requires the heating of an entire vessel containing feedstock materials to trigger a chemical reaction. The microwaves heat the feedstock directly, saving energy and limiting CO2 emissions.

The MAS process is so efficient it can run off renewable power sources such as the solar panels and windmills. Because the process does not need a constant supply of power, it can function even during intermittent power supplies during times of low wind and limited sun exposure, allowing for increased flexibility for ammonia producers.

Another benefit of MAS is its modularity, which allows ammonia production to integrated with smaller power systems and even businesses around the country, meaning even small farming communities in places like Iowa with its renewable energy infrastructure can set their own localized ammonia production to meet their needs. This local production avoids reliance on large scale, centralized production facilities along the Gulf Coast that require product to be transported to market, increasing costs and CO2 emissions.

“This technology can enable easy and low-cost production of a highly sought-after commodity in a more sustainable manner and provide new economic opportunities across the country,” said Dushyant Shekhawat, supervisor for the Lab’s Reaction Engineering team.

“Of course, this is only when talking about ammonia production. There are plenty of other opportunities yet to be discovered once this technology is perfected. The fact that it was nominated for the prestigious R&D 100 Awards this year sends a strong message regarding its potential to change the world for the better.”

In addition to being nominated for the R&D 100, the MAS process took home the 2020 IChemE Global Awards in the category of Research Project for its potential to aid in agriculture, energy production and other applications while also lowering costs and overall energy use.