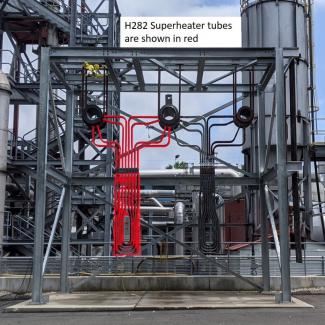 A new superalloy, developed by Haynes International and tested by a collaborative effort led by NETL, has received American Society of Mechanical Engineers (ASME) approval for use in the next generation of power plants that will operate with enhanced efficiency and produce fewer greenhouse gas emissions.

The ASME, whose code and standards are regarded as the world’s leading set of rules for the design of pressure equipment, approved the nickel-based superalloy for use in boilers, fired heaters, pressure vessels and other key components at conditions of up to 875 degrees Celsius (1,607 degrees Fahrenheit), which covers maximum anticipated operating conditions of Advanced Ultra-Supercritical (AUSC) plus carbon dioxide (CO2) capture power plants.

Across much of the U.S. and in more than 100 countries, the ASME code stamp is required for boiler and pressure vessel installations and is a mandatory requirement of many insurance companies.

Transformational power technologies such as AUSC plus CO2 capture systems and supercritical carbon dioxide (sCO2), which uses CO2 as the working fluid in turbomachinery, operate at higher temperatures and pressures leading to more corrosive and harsher environments when compared to traditional power plants.

Additionally, the diversification of power generation sources, such as wind and solar power, is transforming the electrical grid, resulting in power plant components being subjected to cycling operating conditions. Extreme changes in temperatures and pressures brought on by cycling conditions increase performance demands placed on materials of construction.

Haynes International, NETL’s industry partner on the project, also noted that the new superalloy is well-suited for other high-temperature structural applications, especially those in aero and industrial gas turbine engines, because it possesses a unique combination of creep strength (the tendency of a materials to deform permanently under persistent mechanical stresses), thermal stability, weldability and fabricability not found in currently available commercial alloys.

The testing of the superalloy for advanced power plant applications was part of a $27 million project, “Advanced UltraSupercritcial (AUSC) Component Testing” launched in 2015 and funded by the U.S. Department of Energy. Energy Industries of Ohio is the recipient of this cooperative agreement project.

Goals for the second phase of the project called for fabricating full-scale versions of selected key components made of nickel-based alloys and obtaining ASME code approval for new materials, components and processes. Other members of the test team included GE Power, the Electric Power Research Institute, Special Metals Corporation, Metal Tek International and McConway & Torley LLC. Oak Ridge National Laboratory generated most of the lab-scale creep test data that was needed for the H282 code case.

H282 is only the second gamma prime precipitate strengthened nickel superalloy to be approved by the ASME for use in boilers and pressure vessels. The other alloy is Inconel 740, whose ASME code case was supported by the Office of Fossil Energy and Carbon Management’s AUSC materials research and development program.