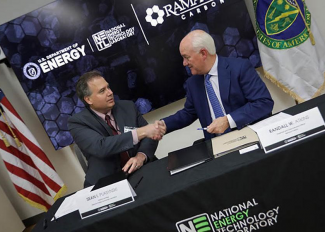 Three years into their formal research partnership, NETL and Wyoming-based technology firm Ramaco Carbon are driving the development of carbon materials that could lead to safer vehicles, less expensive batteries, more durable roads and bridges, and other game-changing innovations while advancing new uses for coal, one of the nation’s most abundant resources.

These technological breakthroughs have been made as part of the cooperative research and development agreement (CRADA) signed by NETL and Ramaco in June 2018, and will help ensure that fossil energy communities are not left behind as the U.S. undergoes a sweeping transformation to establish a carbon emissions-free power sector by 2035 and a net-zero emissions economy by 2050.

“Collaborating with Ramaco and other partners, NETL is leading a historic shift, in which coal goes from being used to produce electricity to an inexpensive feedstock for carbon, a versatile building block to manufacture high-tech products,” said Christopher Matranga, Ph.D., a member of NETL’s Functional Materials Team.

“Under this approach, you do not burn the carbon. Instead, the carbon is used as the manufacturing feedstock to make incredibly valuable products that will drive innovations for electric vehicles, building and construction materials, and even carbon-based computer chips,” Matranga said.

Expanding the use of coal-derived carbon was the focus of testimony presented to the U.S. Senate Committee on Energy and Natural Resources in April by Randall Atkins, Ramaco’s founder, chairman and chief executive officer.

“Coal today is basically thought of as a cheap, controversial, environmentally challenged fuel combusted in power plants,” Atkins said in his testimony. “We look at the commodity through an entirely different lens, in which it has a higher-value purpose beyond energy, one frankly where coal becomes too valuable to burn.”

“In our concept, coal simply stops being an emitter of greenhouse gas. Instead, it becomes an engine of economic progress and job growth for communities that are too often left behind,” Atkins said.

Another upside of the NETL-Ramaco collaboration is its alignment with the goals of the Biden Administration’s Interagency Working Group (IWG) on Coal and Power Plant Communities and Economic Revitalization. The IWG was formed to ensure good-paying union jobs and economic growth will be created in coal communities as the nation transitions to clean energy. NETL Director Brian Anderson, Ph.D., serves as executive director of the IWG.

According to Atkins and Matranga, coal communities could supply the carbon to produce graphene, carbon fiber and other materials. They also could house emerging industries such as additive manufacturing via 3D printing, since NETL is currently supporting the R&D of carbon-based filaments and resins that could offer capabilities beyond the current state of the art.

“Creating carbon manufacturing centers in these communities, next to the sources of coal and long-forgotten carbon-containing mining waste, would in essence create a high-tech ‘carbon valley’ of manufacturing that uses domestically sourced carbon feedstocks, labor and innovation,” Matranga said.

In his testimony before the Senate committee, Atkins noted that “carbon is becoming the dominant advanced material of the 21st century.” Ramaco’s “unparalleled partnership” with the country’s nationals labs, especially NETL and the Oak Ridge National Laboratory, has been essential to the advancement of new carbon technologies, he said.

One of those technologies was invented by an NETL team that used a simple chemical process to produce affordable, high-quality graphene from domestic coal. The revolutionary process received a prestigious 2020 R&D 100 award for being among the 100 most technologically significant innovations introduced into the marketplace in the last year. The NETL team included Matranga, who served as principal investigator, and colleagues Fan Shi, McMahan Gray and Tuo Ji, and has been licensed for commercial development by Ramaco.

Made from honeycomb sheets of carbon just one atom thick, graphene is one of the strongest and lightest materials in existence and could eventually replace silicon in many technologies. NETL’s graphene production costs significantly less than other production methods.

NETL researchers also are collaborating with Ramaco to take advantage of coal-derived graphene’s superb electrical conductivity to develop new biosensor products capable of quickly confirming the presence of specific diseases, viruses or the amount of medication in a blood sample.

The barrier is the high cost of precursor production and fiber processing. Development of inexpensive carbon fiber precursors and processing routes would expand its application from niche markets and enable automakers to build lighter electric vehicles that travel farther on a single charge.

Ramaco envisions development of carbon fiber rebar that doesn’t expand with temperature changes, is lighter than steel rebar and does not rust. Other innovations include the introduction of graphene nanoflakes in cement formulations to increase the concrete’s compressive and flexural strength, reduce porosity and permeability, and improve corrosion resistance.

NETL is a U.S. Department of Energy national laboratory that drives innovation and delivers technological solutions for an environmentally sustainable and prosperous energy future. By leveraging its world-class talent and research facilities, NETL is ensuring affordable, abundant and reliable energy that drives a robust economy and national security, while developing technologies to manage carbon across the full lifecycle, enabling environmental sustainability for all Americans.