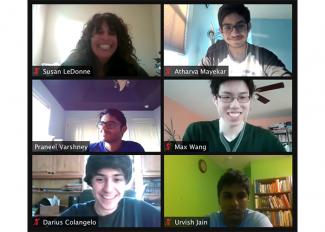 The event was held Feb. 27, 2021, in a virtual format. Thirty-seven teams from 23 school districts throughout the state participated in the competition.

The WPASB tested students’ knowledge of math and science with preliminary and elimination competition rounds. The middle school competition will be held Saturday, March 6.

This year, teams did not play head-to-head matches and instead competed against all other teams in the virtual competition. Each regional competition had at least two preliminary rounds, in which each individual team was read the same sets of questions during each round. The teams with the highest combined point totals from all preliminary rounds advanced to the Elimination Tournament.

The winning team from each qualifying regional competition is eligible to participate in the National Science Bowl, which will also be a virtual event in 2021.

NETL coordinates regional Science Bowl events in West Virginia and western Pennsylvania as part of its STEM Education and Outreach program, which aims to inspire and train the next generation of scientists, researchers and engineers who will one day work to boost the nation’s energy independence through technological solutions. The fast-paced, quiz-style events help middle and high school students expand their science and math knowledge, build teamwork skills, learn how to excel under pressure and more.