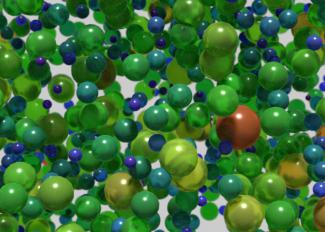 “Our discrete element method (DEM) in MFiX received a significant enhancement with this update,” NETL’s Jeff Dietiker, Ph.D., said. “Fundamental testing in our Multiphase Flow Laboratory also demonstrates that fluidization and flow behavior, even in cold flow systems, can be greatly impacted by the feed-size distribution, so this new version will add great value to our modeling work, especially for modeling larger-scale, complex reactor systems of mixed feedstocks like coal, biomass and plastics, where high fidelity is critical.”

Better representation of particle-size distribution – or polydispersity – could also help build a wider industry adoption of MFiX as an open-source computational fluid dynamics (CFD) software freely available for download. Combined with the addition of a graphical user interface that helped improve the general accessibility and ease of use for the software, the new polydispersity feature has attracted industry users who hadn’t before considered using the software.

The new capability was developed as part of an Arizona State University collaboration. Jason Hissam, who manages the project for NETL, said, “The team has really homed in on industry collaboration in their work. They’ve spoken with major, multinational energy providers and chemical companies that are eager to use these software codes. One thing they’ve learned is that industry is looking for a software suite like MFiX that offers a unified framework for both CFD and DEM as opposed to externally coupling two codes. So, the interest is there, and the improvements offered in version 20.3 should help to attract even more users.”

“Each subsequent MFiX release is bringing new abilities and functionality to the software suite, and seeing a new capability like polydispersity developed as a result of one of our external academic partnerships really underscores these valuable collaborations,” said Sydni Credle, NETL’s technology manager for the Crosscutting Research Simulation-Based Engineering program.

MFiX 20.3 can be downloaded here. Details about the new features can be found here.