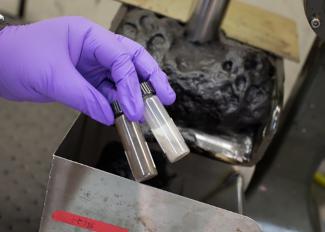 Located near Settlers Cabin Park about 10 miles west of downtown Pittsburgh, the Garden was developed on land that was once actively mined for coal and is the site of ongoing efforts to treat acidic water that drains from abandoned mining operations.

NETL’s work to remove REEs from mine drainage is rooted in the development of sorbents to capture carbon dioxide (CO2) from coal-burning power plants.

Sorbents are an effective way to efficiently capture specific chemicals from liquids and gases. NETL researchers, led by McMahan Gray, a physical scientist who developed the BIAS process for CO2 capture, also found the technology demonstrated great promise to remove contaminants from water sources and to recover REEs from acid mine drainage and other liquid sources, such as oil and natural gas well flowbacks, industrial waste streams and even municipal drinking water.

Gray and his colleagues evaluated the use of BIAS technology at the inlet of a small acid mine drainage treatment pool in an undeveloped area of the Garden property. Ten sorbent reactors (small perforated tubes containing the sorbent) were placed in a frame and hung within the mine drainage inlet pipe where they contacted incoming acidic water.

In a recent project update, Gray noted the BIAS technology demonstrated the ability to extract REEs from drainage containing as little as parts per billion of REEs. (The “rare” in rare earth elements doesn’t stem from a scarcity of deposits, but rather, in their sparse concentrations.)

The results are promising and could help strengthen the nation’s economic security. REEs, which represent the 15 elements of the lanthanide series plus scandium and yttrium, are essential for high-tech manufacturing and are used to produce high-performance optics and lasers, as well as powerful magnets and superconductors. However, the nation is at historically low levels for domestic extraction and processing of these highly valuable resources.

“Technology such as NETL’s BIAS system shows potential to extract REEs from the country’s abundant supply of coal and coal byproducts, as well as acid mine drainage. Developing the technology would reduce U.S. dependence on foreign countries to acquire REEs,” Gray said.

The partnership with Pittsburgh Botanic Garden plays a meaningful role in advancing this research. “We were looking for a local site that could provide good access to acid mine discharge,” Gray said. “We were delighted when we found this new partner to conduct these important field tests.”

Much of the Garden property was mined for decades. Deep and surface mining operations and timbering scarred the land. Since then, it has undergone a transformation. Thanks to restoration and conservation efforts, sections of the 460-acre site now feature flourishing gardens, inviting paths, forested slopes and open meadows.

Other remediation efforts have focused on acid mine drainage, which forms when air and water are exposed to sulfurous rocks in mines or from mining operations. The acidic water, often containing dissolved metals, pollutes streams, creeks and rivers downstream of the mine, killing aquatic life and restricting use of these waterways as sources for public drinking water and recreation. In the Appalachian region of the eastern U.S. alone, more than 3,355 miles of streams are polluted with acid mine drainage.

“Pittsburgh Botanic Garden fully supports finding innovative solutions to address acid mine drainage and creating healthier aquatic ecosystems in western Pennsylvania,” said Keith Kaiser, the Garden’s executive director. “We are proud to partner with NETL to help the Lab develop this technology to extract REEs from acid mine discharges.”

One of the first environmental issues encountered in the development of Pittsburgh Botanic Garden, which opened in 2015, was the presence of acid mine drainage.

Horticulturists arrived on the property to find a pond with water as acidic as vinegar. To bring it back to life, a drainable limestone bed was installed next to the pond. The acid mine drainage is neutralized as it flows over the limestone bed, and the dissolved aluminum in the water reacts with limestone to create aluminum hydroxide, an inert chemical captured in a settling basin.

The Lotus Pond is now the centerpiece of the site’s Japanese garden. A wooden walkway built on top of the limestone bed makes the treatment system nearly invisible.

“I think that approach illustrates why our partnership with Pittsburgh Botanic Garden has been a success. We are like-minded organizations dedicated to finding innovative solutions,” Gray said.

He noted that no new collections of REEs have been acquired at the Pittsburgh Botanic Garden during the coronavirus pandemic, but the field test is expected to resume in the future. Upcoming plans call for refining the BIAS formulation and protocols to improve REE capacity and selectivity. Additional field and pilot testing also are needed to move the BIAS process toward commercialization.