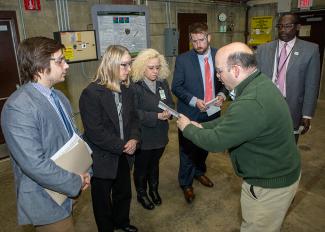 Members of Washington & Jefferson College of Energy Policy and Management visited NETL Morgantown Wednesday Jan. 8 to tour various facilities on campus and familiarize themselves with the Lab’s mission along with the tools and technologies being pursued to accomplish it.

The W&J Center for Energy Policy and Management brings together scientists, industry leaders, elected officials, advocates and citizens with the goal of fostering the development of a national energy policy that has a place for all energy sources, minimizes environmental impact and promotes economic growth.

Center Director Corey Young, along with Research Specialist Max Clark and Community Outreach Coordinator Linda Ritzer, attended the tour which was preceded by discussions and overviews for both organizations to familiarize with each other.

Located in western Pennsylvania, the heart of Appalachia’s natural gas boom, Washington & Jefferson College has stated an interest in shale gas development as well as other advanced energy technologies, and further discussions with NETL representatives highlighted possibilities of future collaboration.

“NETL’s groundbreaking work doesn’t stop at development on campus and ensuring widespread adoption among industry isn’t something the Lab can do alone,” said James Ferguson, who works with NETL’s State and Local Partnerships. “The tour of our Morgantown facility by the reps from Washington & Jefferson College is an example of the Lab’s commitment to working with academic institutions, both regionally and around the country.”

Among the stops on tour of the Morgantown facility was NETL’s Solid Oxide Fuel Cell (SOFC) Test Lab. An SOFC is an electrochemical device that converts oxidants and chemical energy of a fuel such as coal or natural gas into electrical energy.

However, SOFCs function through electrochemical reaction rather than a combustion process. This means they are much more efficient and environmentally compatible than conventional electric power generation processes. That means SOFC technology is uniquely suited to meet the challenges of addressing climate change and water safety while also powering energy-intensive economies.

This includes investigating novel approaches utilizing electromagnetic energy, such as microwaves, to selectively energize chemical reactions. No other known facility in the world has this unique set of capabilities. The ReACT facility’s capabilities are leading to efficiencies that increase power production, reduce overall costs, reduce targeted emissions, and provide for product generation from abundant fossil fuels.