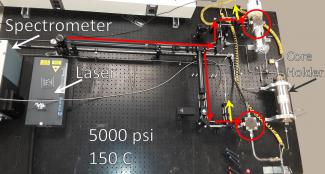 In prior research, NETL researchers successfully miniaturized a LIBS system that can be deployed downhole for subsurface measurements. The simple, easy-to-fabricate, miniature LIBS probe is fully adaptable to field use and capable of measurements even in harsh environments. Now, the same research team has developed a complimentary lab-scale LIBS system that can take measurements under conditions representing the native environment of the sample.

“This system is the counterpart of the miniaturized LIBS sensor,” said Dustin Mcintyre, Ph.D., who invented the technology and developed the new laboratory. “We can replicate the heat, pressure and fluid flow found in the subsurface in a highly controlled lab environment. Then we can test the miniature system in a simulated field environment with more confidence and further refine its design.”

The lab experiments involve placing a piece of a core sample from a permeable rock formation such as sandstone inside of a core holder. This holder can then be heated and pressurized to the same conditions found in the subsurface. Researchers then replicate fluid flow through the formation by pumping carbonated brine through the core sample. Sapphire windows are placed at each end of the core sample, upstream and downstream, enabling elemental measurements to be taken before the brine is pumped and then again after it has passed through.

To take the measurements, the LIBS system focuses a high-intensity pulse of light through sapphire windows and into the fluid spaces before and after the sandstone core. This pulse creates a spark in the water that produces light in all directions made up of atomic emissions from the different elements present. A spectrometer then analyzes the light for elemental composition.

“In this case, we are most interested in measuring calcium, which is basically a part of the glue that holds the sandstone together,” said McIntyre. “When carbon dioxide is dissolved into brine, the liquid becomes weakly acidified and can then dissolve the calcium carbonate. By first measuring the amount of calcium in the upstream location and then comparing it to the amount present downstream, we can determine exactly how much calcium carbonate is being dissolved as the carbonated brine passes through.”

This current research on sandstone and carbonated brine is useful for studying carbon sequestration operations. However, the LIBS system can be adjusted to any temperature, pressure or type of fluid that is found in the subsurface, allowing researchers to monitor many different kinds of changes in a rock sample over time. It could also be used in studying new approaches to rare earth element extraction, further oil and natural gas recovery from reservoirs that are currently considered as depleted, extraction of valuable elements (e.g., lithium) from various materials (e.g., intact rock, mine tailings, ash piles, municipal wastes and discarded electronics), and more. It could also be used to quickly examine adverse leaching effects, such as chemical corrosion of cements and structural materials used in wellbores, bridges, highways and other structures where long-term integrity is important.

“In the past, we’ve used the miniaturized LIBS system to bring the lab to the subsurface,” said McIntyre. “Now, we’re able to recreate the subsurface in the LIBS lab. When used in conjunction with each other, these two systems provide a truly robust research capability capable of minimally-invasive measurements.”