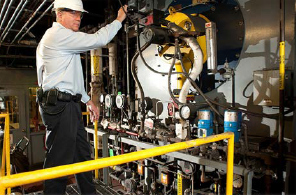 The project, which was funded through FE and is part of the Crosscutting Program, began in 2014 with the goal of developing the next generation of harsh environment sensing systems. The Virginia Tech team designed and fabricated the state-of-the art distributed temperature sensing system using cutting-edge sensors, which were inscribed in a novel micro-structured single-crystal sapphire fiber using an advanced technique.

After successful completion of the first phase, the project was expanded and extended to allow for the development of harsh environment packaging and testing of a prototype sensor system. The harsh environment packaging of the single-crystal sapphire fiber optic sensor relies on a "tube-in-tube" construction with the design flexibility necessary to tailor the sensing system for specific applications.

The ruggedized sensing system, which included a user-friendly interface, was also developed for sensor diagnostics and temperature monitoring in real-time on a mobile device. In the last year of the project (2018), the team successfully deployed prototype sensing systems in small commercial coal- and natural gas-fired boilers at the Virginia Tech Power Plant, thus advancing the technological maturity by validating system performance in a real environment.

Numerous technical achievements for sapphire fiber and sensing technology were also marked during performance of this project, many of which represented the first time such milestones had ever been achieved.

“This project was a success on every level,” said Mullen. “Beyond the technical feat of advancing a technology from concept to validation, other major benefits of this project included training and graduate education of future scientists at Virginia Tech and the dissemination of valuable research knowledge that could be used to develop other high-temperature fiber optic sensor and devices in the future.”