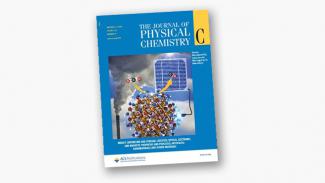 NETL research that created a new copper-gold alloy that can selectively convert carbon dioxide (CO2) into carbon monoxide (CO) — a breakthrough that could impact a $3.4 billion global market for methanol and other synthetic fuels — has landed on the cover of a prestigious national scientific journal.

An article about the research appeared as the cover story in the Dec. 13, 2018, Journal of Physical Chemistry C. The manuscript was titled “Selective Electrocatalytic Reduction of CO2 into CO at Small, Thiol-Capped Au/Cu Nanoparticles.”

A catalyst is a substance that increases the rate of a chemical reaction without itself undergoing any permanent chemical change. Nanomaterial-based catalysts are especially effective because their high surface area can dramatically increase catalytic activity.

A major objective of nanocatalyst research is to create catalysts that have high selectivity, high activity, low energy consumption and a long lifetime by controlling the size, shape, surface composition and electronic structure.

Researchers have sought efficient and affordable ways to convert CO2 into CO because CO is an important industrial commodity chemical that is used in methanol synthesis. The gas is also used in the Fischer-Tropsch process for manufacturing hydrocarbons. CO also reacts with metals like iron, cobalt and nickel to form compounds that have unusual physical and chemical properties that make them useful in industry for coatings and powders.

According to one of the article’s key authors, NETL’s Douglas Kauffman, gold is one of the most selective catalysts for electrochemically converting CO2 into CO, but it is very expensive. Meanwhile, less expensive copper catalysts typically show poor product selectivity and produce a larger variety of chemicals with lower efficiency.

“This development paves the way for less expensive CO2 utilization catalysts that can convert CO2 and water into synthesis gas.”

NETL Director Brian Anderson, Ph.D., said the research is a significant step and having it featured in a national publication like the Journal of Physical Chemistry C brings great recognition to the work of NETL — the only DOE national laboratory dedicated to fossil fuel research.