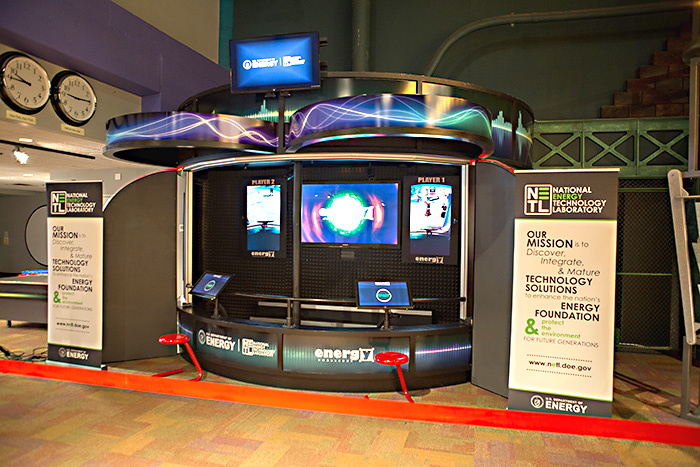 The children we will someday entrust with maintaining the energy security of America can seem hard to reach sometimes amid a sea of distraction. Traditional lecturing and reading have a tough time competing with smart phones and computer games. But, we know children learn best by watching, listening, and especially by doing. Clearly, today’s energy research practitioners must build upon that fact and take extraordinary measures to help provide young people with the knowledge they need to create tomorrow’s energy innovations.

Eight years ago, as part of our 100th anniversary as an energy science leader, NETL and the Carnegie Science Center joined forces to create the Energy Zone exhibit and it was wildly successful. Recently, we were joined by a big audience of regional students and teachers as we cut the ribbon on an updated version of the Energy Zone that builds on its surging popularity and accessible energy topics.

The centerpiece of the Energy Zone is the quiz game called the Energy Challenge that gives participants the chance to buzz-in and answer questions on all aspects of energy.

The Energy Zone teaches Science Center visitors about the importance of energy in our daily lives, how energy works, and how we can conserve and reduce our energy use. It also illustrates the unique collaboration among the region’s academic, government, business, and nonprofit organizations in addressing the challenges posed by energy use.

NETL invested in Energy Zone upgrades, which include a modernized look and feel and content changes to reflect current energy topics, trends, and challenges.

The new attraction builds on quite a record of success as illustrated by the numbers:

The NETL Energy Zone is a vital component of our science, technology, engineering and mathematics (STEM) program that advances the goals of inspiring the next generation of energy researchers, engineers, and scientists and being a proactive developer and supporter of education initiatives at all levels.

NETL is proud of its partnership with Carnegie Science Center and of the positive work the initiative does to inspire tomorrow’s energy researchers, experts, and innovators.

As Acting Director of NETL, Sean I. Plasynski, Ph.D., builds on an extensive background in energy as he leads NETL in its mission to enhance the nation’s energy independence and protect the environment for future generations. For more information about Sean Plasynski's experience, please click here.