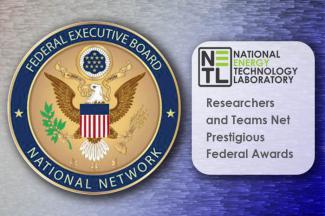 The National Energy Technology Laboratory (NETL) announced that 15 of its employees were honored with prestigious awards by the Pittsburgh Federal Executive Board (FEB) for significant accomplishments, leadership, outreach, and impact on the region and beyond.

The FEB held the 2018 annual Excellence in Government Awards Program luncheon at the Westin Convention Center in Pittsburgh. The awards program recognizes outstanding federal employees for efforts that encourage innovation and excellence in government, reinforce pride in federal service; and help call public attention to the broad range of services provided by federal employees. The awards were selected by an independent committee of federal executives.

The Pittsburgh FEB is comprised of more than 100 Federal agencies and over 20,000 Federal employees in the Pittsburgh region. FEBs, established by Presidential Directive in 1961, encourage communication and collaboration among federal agencies outside of Washington, DC. Approximately 85 percent of all Federal employees work outside the National Capital Region. FEB provides effective communications and coordination between Federal agencies and all levels of government. The goal of FEB is to be a constructive, unifying force within the Federal Government and the regional community by facilitating collaboration.

NETL is a U.S. Department of Energy (DOE) national laboratory that produces technological solutions to America’s energy challenges. For more than 100 years, the laboratory has focused on developing tools and processes to provide clean, reliable, and affordable energy to the American people. NETL conducts a broad range of energy and environmental research and development activities that support DOE’s mission to advance the national, economic, and energy security of the United States.