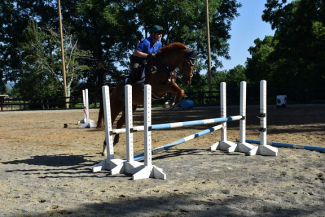 In addition to his work as NETL’s Associate Director for Geological and Environmental Systems, Philip Reppert, Ph.D., has demonstrated a profound talent for horsemanship and storytelling, recently combining these two passions into writing projects, including a family-friendly novel with a message of hope during the holiday season.

Growing up in Shillington, Pennsylvania, Reppert comes from a family where medical and STEM careers were predominant, which inspired him to pursue a career in science. He earned his bachelor of science degree in engineering from Penn State University, and after working in industry for several years, he went back to school and eventually earned a Ph.D. from the Massachusetts Institute of Technology. Reppert started working for the federal government at the Defense Threat Reduction Agency in Albuquerque, New Mexico. Reppert later moved back to Pennsylvania to be closer to family, which took him to the National Geospatial Intelligence Agency where he worked for seven years before joining NETL.

Outside his work at the Lab, Reppert busies himself with several aspects of horsemanship. Over the years, Reppert has trained many horses and is a certified horsemanship instructor. His wife, Nancy Reppert, also works with horses, making their shared passion a family business. They even own a horse training and boarding business in western Pennsylvania.

“I always loved horses. My first name even means, lover of horses. After I graduated from Penn State, I finally had the opportunity to get my first horse and shortly thereafter, my first farm,” Reppert said. “Originally, I showed in Arabian Showmanship classes. I then tried endurance racing, 50-to-100-mile races, which was fun but there weren’t enough competitions near where I lived for it to be practical. I then saw eventing (also call horse trials) where you must have the versatility to do dressage, then cross country over fences and then stadium jumping. In the Olympics it’s done over three days and is called three-day eventing – it’s a huge adrenaline rush.”

Reppert’s time in the Southwestern United States introduced him to natural horsemanship, where the focus is on communicating with horses in their language and gentling them, not breaking them. This is when he started working with Dennis Reis Universal Horsemanship. He gained experience with green horses, those that have been around humans and handled but with little to no training. Reppert even worked with feral horses, those that haven’t been around humans and have had no handling. Much like feral cats, feral horses are afraid of and don’t trust humans.

“Horses are sensitive animals, actually empathetic. There is so much you can learn from them when you work with them,” Reppert said.  Some rehabilitation places, such as Crystal Peak Youth Ranch in Oregon, pair abused horses with abused children with amazing results. Horses are also used in a variety of rehabilitation programs ranging from multiple sclerosis to occupational therapy, to programs for autistic children, and others.”

In addition to his work as a geophysicist and leader at NETL and his work in horsemanship, Reppert engages in the craft of storytelling, having started writing in the third grade. He developed his skills through the years and recently wrote and published his own novel, The Christmas Mustang.

“I wanted to write a story that the whole family can read and also one that encourages and uplifts. I also wanted to write a story that treated the horse topic realistically,” Reppert said. “My writing is based on a world view that emphasizes hope. Even through all the challenges the characters experience, they have a world view that gives them hope and helps them overcome their obstacles.”

Reppert said his experience as a scientist helped him to be an efficient researcher when trying to learn about new topics. His experience with horses allowed him to write about them in an authoritative way and give the stories realism. Reppert said his writing of novels has helped him to be a better writer in nonfiction fields as well, such as technical writing on research topics.

He also noted that his continued story writing experiences have allowed him to reconnect with others from his past and he even stayed in touch with his third-grade teacher that made an impression, something he said is one of the most valuable things an instructor can experience throughout the course of their career. Going forward with his research and horsemanship, Reppert said he plans to revisit stories he conceived in the past, writing them with lessons picked up along the way.