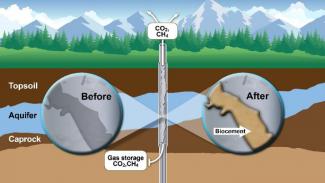 The image above illustrates MICP formation in a wellbore cement defect and leakage pathway. The resulting mineral seal mitigates leakage to aquifers and the atmosphere. Reprinted from the International Journal of Greenhouse Gas Control, Vol 86.

Bioengineering technology developed by university and industry partners with NETL oversight could become an important tool in the Biden Administration’s plan to seal orphaned oil and gas wells and prevent leakages of methane, a potent greenhouse gas (GHG), into the atmosphere and underground water supplies.
NETL’s collaboration with the Montana State University Energy Research Institute and Center for Biofilm Engineering, Montana Emergent Technologies (MET) and others began in 2014 to develop a novel technology in which microbes initiate a process to help seal problematic defects in wellbore casing cement.

After undergoing multiple laboratory and field tests, the technology was licensed as a commercial product. So far, it’s been used by BioSqueeze Inc., formerly MET, to plug more than 40 wells across the U.S.

The same technology could also play a significant role in ensuring safe and reliable injection operations and long-term containment of carbon dioxide (CO2), the dominant form of anthropogenic GHG, in subsurface formations. The integrity of CO2 injection wells and geologic storage complexes is critical to achieve the administration’s call for net-zero carbon emissions in the power sector by 2035 and the broader economy by 2050.

Oil and natural gas wells are typically constructed by drilling through layers of rock, inserting steel pipe (casing) and then injecting specialty cements between the casing and the rock interior of the wellbore. Cement defects can form during the initial cement placement. Mechanical stresses such as pressure cycling and thermal expansion or contraction, as well as physical aging, can also produce cement defects, creating potential hydrocarbon leakage pathways.

Cement and resins have been widely used to remediate damaged wellbore cement and stop leaks. But sealing small fissures is difficult because of the high viscosity and/or large particle size of the sealants. Some fissures are so small that cement particles from remedial operations are unable to enter the pathway.

Some microbes contain an enzyme that triggers an increase in pH and carbonate concentrations that, in turn, can cause dissolved minerals to precipitate and form solids similar to limestone. These aqueous suspensions and solutions have a viscosity like water, allowing them to flow readily into the narrow leakage channels. “The process promotes calcite precipitation in the channels, essentially growing new rock to plug the leak,” said NETL’s Robert Vagnetti, project manager, Natural Gas & Oil.

MICP technology, which contains no harsh chemicals, could be a game-changer to help meet provisions within the Infrastructure Investment and Jobs Act that President Joe Biden signed into law on Nov. 15. The legislation has set aside nearly $5 billion to plug and clean up documented orphaned wells. It also directs the U.S. Secretary of Interior to offer states grants as large as $5 million to fund plugging, remediation and reclamation of orphaned wells.

Orphaned wells are significant emitters of methane, which, according to the U.S. Environmental Protection Agency (EPA), is the second-most abundant anthropogenic source of GHG after carbon dioxide (CO2). Estimates for the number of abandoned wells across the U.S., many of which were drilled before regulatory standards were enacted, range from 1 to 3 million.

The EPA also notes that methane is more than 25 times as potent as CO2 at trapping heat in the atmosphere. Over the last two centuries, methane concentrations in the atmosphere have more than doubled, largely due to human-related activities. Because methane is both a powerful GHG and short-lived compared to CO2, achieving substantial reductions would have a rapid and considerable effect on atmospheric warming potential.

“In developing the technology, multiple questions needed to be answered to determine whether MICP had real potential. Would downhole pressures and temperatures affect the process? Could the in situ process be controlled from the surface such that the zone of interest could be effectively sealed?” Vagnetti said.

To address them, bench-scale experiments on fractured rocks, rock-cement interfaces and other samples were conducted at pressures and temperatures relevant to subsurface depths of 1,100 to 2,500 feet. “We found calcite formation and fracture repair using MICP were successful in these tests,” Vagnetti said. After the completion of several additional studies, BioSqueeze licensed the MICP process.

“In my career, the development of MICP stands out as an excellent example of how the U.S. Department of Energy and NETL can work with university, industry and small business partners to spearhead the commercialization of a technology to solve not just an industry problem but to also address a critical climate change issue,” Vagnetti said.