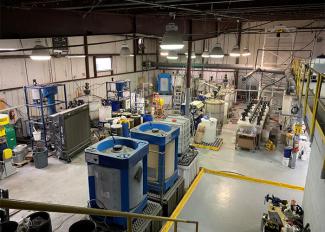 A NETL-supported project at the University of Kentucky (UK) successfully conducted pilot-scale testing in their facility that was designed to extract mixed rare earth elements from coal and coal by-products using advanced extraction technologies, achieving production of mixed rare earth oxide (MREO) concentrates of up to 98% purity and exceeding original project goals.

During Phase I of their first DOE-funded rare earth recovery project, which began in March 2016, UK and project partners Virginia Tech, West Virginia University, Minerals Refining Company, Blackhawk Mining, and Alliance Coal performed a feasibility study and developed a preliminary design for a pilot-scale plant to process up to ¼ ton per hour of coarse coal refuse and recover rare earths from feedstock materials from the Central Appalachian Basin and Illinois Basin.

In Phase II of the project, UK completed final design and constructed the pilot plant at an Alliance Coal facility near Providence, KY. UK added Kentucky River Properties, a coal resource owner, as a project partner. UK initiated operation of the plant in June 2018. The system configuration included an X-ray particle sorter to identify and select the most desirable coal refuse particles as input to the pilot-scale plant. This particle sorter would optimize the type and concentration of rare earths to be fed to the pilot-scale plant. The most desirable coal particles would be physically ground and sized in preparation for chemical processing that would remove mixed rare earths from the coal particles.

UK’s pilot plant began producing small quantities of MREO concentrate in October-November of 2018. Critical rare earth elements such as neodymium and yttrium, were identified at levels of more than 45% of the concentrate.  By the conclusion of Phase II, UK’s pilot-scale plant achieved production of MREO concentrates up to 98% purity.

“The University of Kentucky far exceeded DOE’s original goal of 2% purity for production of mixed rare earth concentrates. This is an exciting development and we look forward to future accomplishments,” said Charles Miller, project manager at NETL. “With the ability to test multiple rare earth and other critical mineral extraction methods in the same facility, projects like this can drive down the costs of harvesting critical minerals within the United States. Once optimized, these processes can assist in reducing the environmental effects of legacy mining and mine drainage sites and also set the foundation for a new domestic supply chain for production of high-purity critical minerals.”

UK has a follow-on pilot-scale project funded by DOE to further optimize extraction and recovery of mixed rare earths from coarse coal refuse, to co-produce other critical minerals, and to consider further advanced processing to produce larger quantities of high purity mixed rare earths and critical minerals. This follow-on project is scheduled to complete in mid-2022.

Successful testing of pilot-scale technology is anticipated to serve as a stepping stone to future scale-up to commercial rare earth production facilities based in the United States.