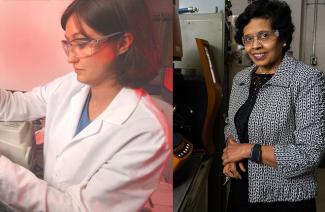 Reviewing the databases of standardized citation metrics across a variety of scientific fields, a PLOS Biology article provided updated analyses assessing scientists for career-long citation impact up until the end of 2019. The data includes all scientists who, according to a composite index, are among the top 2% of scientists within their main subfield discipline (considering those that have published at least five papers) leading to a total of 6,880,389 scientists being assessed.

“Whenever our scientists are described as ‘top tier’ or ‘world-class’ it’s no exaggeration, and the publication by PLOS Biology demonstrates NETL’s immense contributions in the research community,” said NETL Director Brian Anderson. “From their work to craft next-generation alloys, to developing cost-effective technologies that enabling power plants to remove carbon dioxide (CO2) from flue gas, we’ve seen firsthand what the bright minds at NETL can do, and these are just a few examples. Our researchers have more than earned their place among the world’s top scientists.”

Many of the scientists who made PLOS Biology’s list often contribute to the greater research community in addition to their hands-on work at NETL.

For example, Siriwardane leads the oxygen carrier development research work in chemical looping combustion, chemical looping CO2 utilization and chemical looping gasification for hydrogen (H2) production at NETL. Her research includes catalyst development for H2 production from natural gas and coal. Siriwardane has also conducted research on development of sorbents for CO2 removal for various processes and hydrogen sulfide removal from coal gasification gas streams. In addition to her research, Siriwardane is a co-inventor of 25 U.S. patents, six U.S. patent applications, and has co-authored 92 peer-reviewed publications. She has won three R&D 100 awards. She has designed sorbents/oxygen carriers from lab-scale to pilot-scale operations and has licensed her patents to several U.S. companies.

Gao is among the pioneering scientists in the world in the field of high entropy alloys research. His research at NETL focuses on accelerating high-performance materials development for extreme environments by integrating multi-scale computational modeling with critical experiments. Gao has organized or co-organized a variety of symposia and special topics on high entropy alloys at conferences and journals. He is a principal editor for the Journal of Materials Research. He has published more than 80 peer-reviewed journal papers and five book chapters. He also co-edited the book “High Entropy Alloys: Fundamental and Applications.”

Goodman, a research chemist at NETL, developed quantitative statistical methods to provide policymakers with science-based assessments of large-scale carbon storage technologies and laboratory-based characterization tools to quantify the chemical reactivity of subsurface geologic formations. She has mentored 23 students and postdoctoral fellows who have continued as environmental scientists at industrial, academic, and government institutions.
During her career. Goodman has published 63 papers in her field that have been collectively cited more than 3,871 times as of Nov. 30, 2020.

Sorescu, a member of NETL’s Computational Materials Engineering Team with 20 years of research experience, has authored or co-authored more than 120 peer-reviewed international journal publications and two book chapters. His expertise is in area of high-performance computations using both quantum mechanical and classical simulation methods as applied to energy conversion and utilization, heterogeneous catalysis and electrocatalysis, nanostructured materials and gas sensors, high-energy materials, photoconversion, and gas sorbents.

These are but a few examples of the talent and research prowess drawn to NETL and its work to provide the tools and techniques to allow the United States to maximize the benefits of its fossil fuel resources in affordable and environmentally sustainable manners.

More information about PLOS Biology and its selection of top scientists can be viewed here.