WHAT IS CARBON CAPTURE AND STORAGE?

Carbon capture and storage (CCS) is the separation and capture of carbon dioxide (CO2) from the emissions of industrial processes prior to release into the atmosphere and storage of the CO2 in deep underground geologic formations.

CCS enables industry to continue to operate while emitting fewer greenhouse gases (CHGs), making it a powerful tool for addressing mitigation of anthropogenic CO2 in the atmosphere. However, storage must be safe, environmentally sustainable, and cost-effective. Suitable storage formations can occur in both onshore and offshore settings, and each type of geologic formation presents different opportunities and challenges. Geologic storage is defined as the placement of CO2 into a subsurface formation so that it will remain safely and permanently stored. The U.S. Department of Energy (DOE) is investigating five types of underground formations for geologic carbon storage:

Myth: Carbon capture and storage is not a feasible way to reduce human CO2 emissions.

Reality: Developing the technologies and know-how to successfully capture and store CO2 emissions will allow for a viable industry that will reduce the human contribution to atmospheric CO2 levels.

HOW CAN CO2 BE STORED UNDERGROUND?

Carbon dioxide (CO2) can be stored underground as a supercritical fluid. Supercritical CO2 means that the CO2 is at a temperature in excess of 31.1°C (88ºF) and a pressure in excess of 72.9 atm (about 1,057 psi); this temperature and pressure defines the critical point for CO2. At such high temperatures and pressures, the CO2 has some properties like a gas and some properties like a liquid. In particular, it is dense like a liquid but has viscosity like a gas. The main advantage of storing CO2 in the supercritical condition is that the required storage volume is substantially less than if the CO2 were at “standard” (room)-pressure conditions.

Temperature naturally increases with depth in the Earth’s crust, as does the pressure of the fluids (brine, oil, or gas) in the formations. At depths below about 800 meters (about 2,600 feet), the natural temperature and fluid pressures are in excess of the critical point of CO2 for most places on Earth. This means that CO2 injected at this depth or deeper will remain in the supercritical condition given the temperatures and pressures present.

Myth: The CO2 gas behaves the same in the atmosphere as it does when injected deep underground.

Reality: The elevated temperatures and pressures that exist at the depths where CO2 is injected changes its characteristics, allowing for storage of much greater volumes of CO2 than at the surface.

HOW IS CO2 TRAPPED IN THE SUBSURFACE?

Trapping refers to the way in which the carbon dioxide (CO2) remains underground in the location where it is injected. There are four main mechanisms that trap the injected CO2 in the subsurface. Each of these mechanisms plays a role in how the CO2 remains trapped in the subsurface. The following provides a description of each type of trapping mechanism.

Structural Trapping – Structural trapping is the physical trapping of CO2 in the rock and is the mechanism that traps the greatest amount of CO2. The rock layers and faults within and above the storage formation where the CO2 is injected act as seals, preventing CO2 from moving out of the storage formation. Once injected, the supercritical CO2 can be more buoyant than other liquids present in the surrounding pore space. Therefore, the CO2 will migrate upwards through the porous rocks until it reaches (and is trapped by) an impermeable layer of seal rock.  Diagram depicting two examples of structural trapping. The top image shows the CO2 being trapped beneath a dome, preventing it from migrating laterally or vertically. The bottom image shows that CO2 is prevented from migrating vertically by the overlying seal rock and a fault to the right of the CO2. 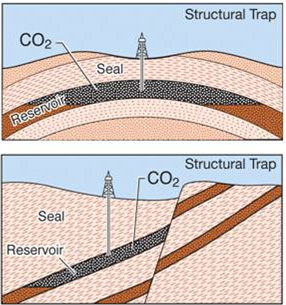 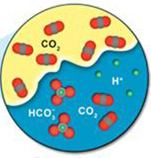 Mineral Trapping – Mineral trapping refers to a reaction that can occur when the CO2 dissolved in the rock’s brine water reacts with the minerals in the rock. When CO2 dissolves in water it forms a weak carbonic acid (H2CO3) and eventually bicarbonate (HCO3-). Over extended periods, this weak acid can react with the minerals in the surrounding rock to form solid carbonate minerals, permanently trapping and storing that portion of the injected CO2.  Diagram depicting the formation of minerals on the surface of a rock grain (bottom right of image) as it reacts with the dissolved CO2 in the brine water. The magnesium in the rock grain combines with the CO3 in the water to produce the mineral MgCO3 on the grain’s surface. 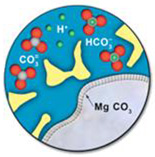 Myth: There is nothing preventing injected CO2 from migrating to the Earth’s surface through the overlying rock, making CO2 leakage inevitable.

Reality: There are four main mechanisms that help trap CO2 in the subsurface and prevent it from migrating to the surface.

WHAT ARE THE CHARACTERISTICS OF A SUBSURFACE CARBON STORAGE COMPLEX? 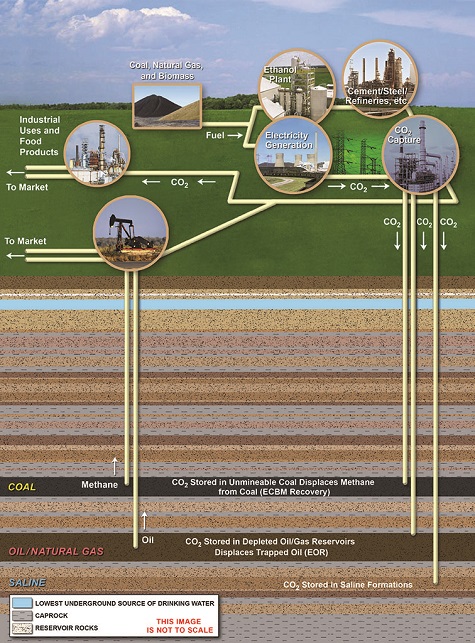 When assessing a storage site, some of the reservoir characteristics that are studied for long-term carbon dioxide (CO2) storage include storage resource, injectivity, integrity, and depth. The term "subsurface storage complex" refers to the geologic storage site that is targeted to safely and permanently store injected CO2 underground. It includes a storage formation with at least one, or usually multiple, regionally continuous sealing formations called caprocks or seals.

All of these characteristics are examined in order to determine if a potential storage complex has adequate conditions for CO2 storage.

Image depicting the features of different types of carbon storage complexes including saline formations, oil and natural gas reservoirs, unmineable coal areas, organic-rich shales, and basalt formations. All of the complexes include: (1) a confining zone that includes a thick (or several) sealing layer(s) above the storage zone, separating the stored CO2 from drinking water sources and the surface; (2) adequate integrity within the storage formation and sealing layers; (3) sufficient porosity and permeability to store large amounts of CO2; and (4) are at supercritical depth to allow for concentrated storage.
(mouseover image for more detailed description of portions of the complex)

Myth: Any location that has an injection well can be used to inject and store carbon.

p>Reality: A specific set of characteristics are needed to make a setting appropriate to act as a storage complex. These characteristics are determined through a rigorous characterization process that includes assessing potential storage risks and meeting the regulations under the U.S. Environmental Protection Agency’s (EPA) permitting process that grants permission to inject CO2 for carbon storage purposes.

WHAT ARE THE DIFFERENT STORAGE TYPES FOR GEOLOGIC CO2 STORAGE?

Suitable storage formations can occur in both onshore and offshore settings, and each type of geologic formation presents different opportunities and challenges. The U.S. Department of Energy (DOE) is investigating five types of underground formations for geologic carbon storage:

A complete description of these storage types can be found in DOE's Carbon Storage Atlas, Fifth Edition (Atlas V). 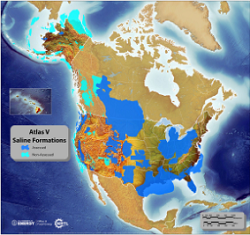 UNMINEABLE COAL SEAMS
Coal that is considered unmineable because of geologic, technological, and economic factors (typically too deep, too thin, or lacking the internal continuity to be economically mined) may still serve as locations to store CO2. To be considered for CO2 storage, the ideal coal seam must have sufficient permeability and be considered unmineable. Coal seams may also contain methane (CH4), which can be produced in conjunction with CO2 injection in a process called enhanced coal bed methane (ECBM) recovery (see depiction below). In coal seams, the injected CO2 can be chemically trapped by being adsorbed (or adhered) to the surface of the coal while CH4 is released and produced. This trapping mechanism allows for permanent storage of CO2.  Diagram depicting ECBM and EOR recovery process by which CO2 is injected and used to drive the natural gas or oil towards a recovery well. 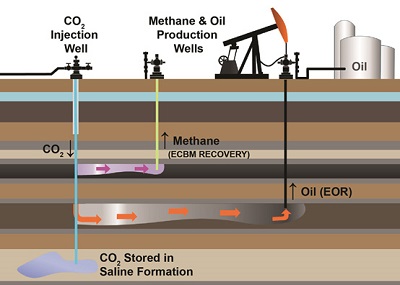 BASALT FORMATIONS
Basalt is a type of formation that was deposited when large flows of lava spread from volcanoes, cooled, and then solidified. Over time, thick layers of basalt were built up (with other formation types often layered in between) and have been identified in buried deposits across the United States. The chemical and physical properties of these basalts, as well as the other formation types in between basalt layers, make them good candidates for CO2 storage systems. The chemistry of basalts potentially allows injected CO2 to react with magnesium and calcium in the basalt to form the stable carbonate mineral forms of calcite and dolomite. This mineralization process shows promise to be a valuable tool for CCS because the mineralization process permanently locks carbon in the solid mineral structure, thereby permanently trapping the CO2.  Image depicting Basalt Formations in the United States. Basalts may offer a highly secure method of CO2 storage because of their potential to allow the CO2 to react with the minerals in basalt to form carbonates, thereby permanently trapping the CO2. 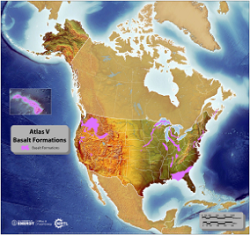 ORGANIC SHALE FORMATIONS
Shale formations are found across the United States and are typically low-porosity and low permeability formations best suited as confining zones. However, some shales have similar properties to coal, having the ability to trap CO2 through adsorption (adherence to the surface), subsequently releasing methane and making them potentially attractive for storage.  Image depicting basins containing organic-rich shales in the United States and portions of Canada.

Myth: There are limited options to store CO2 underground, and little is known about these options.

Reality: There are many storage types that can store CO2 and geologic storage of oil, natural gas, and CO2 in the subsurface has been occurring naturally for millions of years.

WHAT IS THE UNITED STATES DEPARTMENT OF ENERGY DOING TO DEMONSTRATE THE COMMERCIAL VIABILITY OF CCS?

The Regional Carbon Sequestration Partnership (RCSP) Initiative is an initiative implemented through the U.S. Department of Energy (DOE), Office of Fossil Energy (FE), and National Energy Technology Laboratory (NETL). The initiative supports research into the best regional approaches for permanently storing carbon dioxide (CO2) in geologic formations through characterization and field projects. The partnerships include more than 400 distinct organizations, spanning 43 states and 4 Canadian provinces; have conducted 19 small-scale field projects building on research and are developing the framework needed to validate geologic carbon storage technologies. There are several large-scale CO2 tests (tests injecting at least 1 million metric tons [MMT] of CO2) currently being conducted or recently finished in the United States:

Myth: In the United States, there have only been laboratory studies related to the viability of CCS.

Reality: The United States has supported a concerted effort that includes many large-scale CO2 storage projects that are designed to verify the viability of long-term carbon storage.

WHERE AROUND THE WORLD IS CO2 STORAGE HAPPENING TODAY?

Carbon dioxide (CO2) storage is currently happening across the United States and around the world. Large, commercial-scale projects, such as the Sleipner CO2 Storage Site in Norway and the Weyburn-Midale CO2 Project Project in Canada, have been injecting CO2 for many years. Each of these projects stores more than 1 million metric tons (MMT) of CO2 per year. Large-scale efforts are also currently underway in China, Australia, and Europe. These commercial-scale projects are demonstrating that large volumes of CO2 can be safely and permanently stored.

Additionally, a multitude of other carbon capture and storage (CCS) efforts are underway in different parts of the world to demonstrate the capability of geologic storage and technologies for future long-term CO2 storage. To date, more than 200 CO2 capture and/or storage operations (including in-development and completed) have been carried out worldwide.

Myth: There is little to no international work being done to actively validate the concept of long-term carbon storage.

Reality: There are many projects within the United States and around the world where geologic storage of CO2 is being successfully performed.