The U.S. Department of Energy’s Office of Fossil Energy and NETL have announced up to $131 million for carbon capture, utilization, and storage research and development projects through one new funding opportunity announcement (FOA) and the winners of five project selections from a previous FOA.

The U.S. Department of Energy and NETL announced plans to provide up to $22 million for research aimed at achieving breakthroughs in the effort to capture carbon dioxide directly from ambient air.

The Workshop on Direct Air Capture Technology Needs, co-hosted with the U.S. Department of Energy’s Office of Fossil Energy (DOE-FE), was held on July 24, 2019 in Washington, DC. The workshop was designed to help inform DOE-FE as they finalize a research program plan for direct air capture and other associated carbon removal technologies. Click here to see agenda and presentations.

View program highlights in a compact and shareable form.

On-site scale-ups and process enhancements for ten technologies; scale-ups for testing at larger sites for five solvents; scale-up to commercial operation for one solvent.

The project will provide important insights into hybrid post-combustion CO2 capture systems. While each underlying capture system has benefited from previous NETL-sponsored research, the integration of the two offers a new opportunity to explore further reductions in the cost of capture.

For the foreseeable future, coal will continue to play a critical role in powering the Nation’s electricity generation, especially for base-load power plants. Coal-fired power plants have made significant progress in reducing emissions of sulfur dioxide, nitrogen oxide (contributors to acid rain), particulate matter, and mercury.

Research and development is currently being pursued for a new generation of clean coal-fueled energy conversion systems capable of producing competitively priced electric power with a focus on improving efficiency, increasing plant availability, reducing cooling water requirements, and achieving ultra-low emissions. A key aspect of this area of research is targeted at improving overall system thermal efficiency, reducing capital and operating costs, and enabling affordable capture including conversion techniques for the utilization of carbon dioxide (CO2) as fuel. Read more about the Carbon Capture Program. 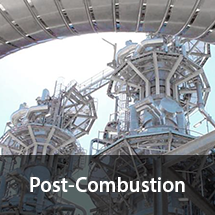 Post-combustion CO2 capture technologies remove CO2 from the combustion flue gas of a power plant following combustion of a fossil fuel. It is primarily applicable to conventional coal-, oil-, or gas-fired power plants. In a typical coal-fired power plant, fuel is burned with air in a boiler to produce steam that drives a turbine/generator to produce electricity. Flue gas from the boiler consists mostly of nitrogen and CO2, along with small amounts of particulates, sulfur dioxide, and nitrogen oxides. The CO2 capture process (or post-combustion capture) would be located downstream of the conventional pollutant controls. 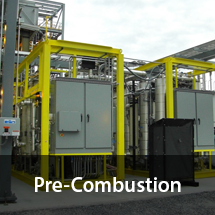 Pre-combustion capture technologies capture CO2 prior to fossil fuel combustion. Pre-combustion capture is mainly applicable to gasification-based power plants, where fuel is converted into gaseous components by applying heat under pressure in the presence of steam and oxygen. In this process, fuel is converted to a mixture of hydrogen (H2) and carbon monoxide (CO), along with minor amounts of other gaseous constituents, called a synthesis gas (syngas). To enable carbon capture, the syngas is further processed in a water-gas shift reactor, which converts CO into CO2 while producing additional H2, thus increasing the CO2 and H2 concentrations. After CO2 removal (or pre-combustion capture), the H2 is used as a fuel in a combustion turbine combined cycle to generate electricity or other useful high-value products. 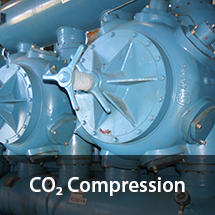 Since carbon dioxide (CO2) separation from the gas stream typically occurs at low pressure, compression is required to increase the pressure and reduce the volume flow, making transport more practical. Furthermore, the geologic formations used for long-term storage of CO2 are under a great deal of pressure because they are deep underground. Before injection can take place, the CO2 must be compressed to a pressure greater than that of the formation.