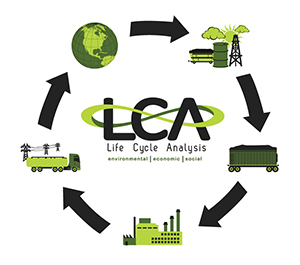 Life Cycle Analysis (LCA) is a comprehensive form of analysis that utilizes the principles of Life Cycle Assessment, Life Cycle Cost Analysis, and various other methods to evaluate the environmental, economic, and social attributes of energy systems ranging from the extraction of raw materials from the ground to the use of the energy carrier to perform work (commonly referred to as the “life cycle” of a product). Results are used to inform research at NETL and evaluate energy options from a National perspective.

NETL uses life cycle analysis (LCA) as a tool and framework for evaluating energy technology and policy options on a common basis. LCA includes the environmental burdens of converting fuel to useful energy, infrastructure construction, extraction and transportation of fuel, and transport of the final energy product to the end user. NETL's LCA method also includes life cycle costing (LCC), which applies cost metrics to the same boundaries as their environmental models. NETL has applied LCA to fossil, nuclear, and renewable energy systems that produce electricity and liquid fuels. The final products of these LCAs include detailed reports as well as dynamic software tools.

BIOMASS
Biomass includes woody or herbaceous materials from forests, cultivated crops, or agricultural residue. Biomass absorbs carbon dioxide as it grows; this carbon dioxide is released when the biomass is combusted. Biomass can be used as a feedstock to co-fired power plants that consume coal and biomass.

COAL
Coal is a fossil fuel that is extracted by underground or surface mining techniques. The U.S. has a large resource base of coal, including surface mines in the western U.S. and underground mines in the eastern U.S. After extraction, coal is transported by rail to a power plant, where it is pulverized and combusted for power generation.

FUELS
NETL has conducted life cycle studies of gasoline, diesel, and jet fuel refined from crude oil; diesel and jet fuel from gasified coal and/or biomass; and ethanol from corn and cellulosic feedstocks.

GEOTHERMAL
Geothermal energy is accessed by drilling wells a mile or deeper below the surface of the Earth. There are several technologies for converting geothermal energy to electricity, but the two most common technologies in the U.S. are flash steam and binary technologies. Flash steam geothermal plants harness the high temperature and pressure of a geothermal reservoir to generate steam that drives a steam turbine and returns water to the reservoir. Binary plants use heat exchangers with a heat exchange fluid to drive a steam cycle.

NATURAL GAS
Natural gas is considered a cleaner burning and more flexible alternative to other fossil fuels today. It is used in residential, commercial, industrial, and transportation applications in addition to having an expanding role in power production. However, natural gas still contains greenhouse gasses (GHG) such as methane which can be 8 to 87 times as potent as CO2. Nonetheless, many opportunities to decrease the GHG emissions from natural gas extraction, delivery, and power production have been recognized.

NUCLEAR
The nuclear supply chain has a long series of material processing and waste management steps, but the central activity of nuclear power is the splitting of atoms to produce smaller atoms and energy – a process known as nuclear fission. Most nuclear power plants use uranium fuel with high concentrations of uranium (U)-235 isotope. The energy produced by nuclear fission is used to produce steam for a power cycle similar to other thermoelectric power plants.

PETROLEUM
The petroleum supply chain includes crude oil extraction and transport; refining; and consumption of gasoline, diesel, and other refinery products. A petroleum refinery is a complex system that separates crude oil into light and heavy fractions and transforms it into liquid fuels and petrochemical feedstocks.

SOLAR
Solar thermal power harnesses energy from the sun by using solar collectors that concentrate sunlight on a fluid that is subsequently sent to a steam-driven electricity generation system. Sunlight can also be converted directly to electricity using photovoltaic panels, wherein photons increase the energy level of electrons to produce an electric current. For utility-scale electricity generation, the current technologies for solar thermal power plants are more favorable than photovoltaic systems.

WIND
Wind power involves the conversion of wind energy to electrical energy. The most common type of technology for utility-scale wind power is a three-blade rotor mounted on a horizontally-oriented shaft. The shaft is connected to a gearbox or direct-drive system that drives an electric generator. Wind power facilities, known as “wind farms,” have multiple wind turbines as well as transformers and other electrical equipment that allow transmission of power to the electricity grid.

A unit process is the smallest building block in a life cycle model. Each unit process contains qualified input and output data including resource requirements and emissions. The NETL Unit Process Library is available to increase the public's understanding of the tools used to inform energy policy and guide energy research. Each NETL unit process contains a DS and DF file. The DS file (Detailed Spreadsheet Documentation) is an Excel file that contains all of the parameters, inputs, and outputs for a given system as well as background data, calculations, and quality scores. The DF file (Process Documentation File) is a PDF document that contains major assumptions and data sources that are the basis for each unit process.