The Department of Energy (DOE) and the National Energy Technology Laboratory’s (NETL) Feasibility of Recovering Rare Earth Elements program is currently focused on developing extraction, separation and recovery technologies for the production of rare earth elements (REEs) and critical materials (CMs) from coal and coal-based resources.  This RD&D program consists of developing process and production technologies, environmental management, and field materials sampling and characterization, along with systems integration, optimization and efficiency improvements to produce REEs and CMs from coal and coal by-products streams, such as coal and coal refuse, clay/sandstone over/under-burden coal seam materials, power generation ash and aqueous effluents as acid mine drainage (AMD) sludge.

Our Nation’s vast coal reserves contain quantities of REEs that offer the potential to reduce our dependence on others for these critical materials and to create new industries in regions where coal plays an important economic role.  The DOE-NETL REE-CM program offers a pathway to improve the economics and reduce the environmental impact of a domestic coal-based value chain.  The development of an economically competitive supply of REEs and CMs will assist in securing and maintaining our Nation’s economic growth and National Security.

REEs typically occur at low concentrations throughout the earth’s crust. REEs are not found in an isolated form readily available for extraction, but are distributed throughout a variety of minerals, and are also found in coal-based resources. REE-bearing mineral deposits are relatively rich in either light rare earth elements (LREEs) or heavy rare earth elements (HREEs), with LREEs being more abundant.

China has been the dominant supplier of REEs since 1988, providing 95 percent of the global REE market in 2011. As recently as 2011, decisions by China to restrict exports and favor its own domestic industries resulted in REE price volatility. Consequently, rising concern among industrialized nations has driven a resurgence of global interest in REE mineral exploration and extraction, and related research on supply, demand, utilization, recycling, reuse, and substitution. Several new commercial REE projects are in various stages of planning and development, and are focused on diversifying supply.  In contrast, new efforts to purify and refine REEs are limited.

Significant Sources
Coal refuse, power generation ash, ash ponds, and acid mine drainage sludge have received attention for the potential economic value that these materials may have based on contained REEs.  Certain coal and coal by-products have elevated concentrations of HREEs - which are lowest in supply, rank high in criticality and price, and are projected to increase in demand - making them attractive targets for REE recovery despite their low concentration.  Basket price can be used as a rough tool to compare the compositional distribution of REE-bearing ores based on the current relative value of each element or oxide as a pure or nearly 100 percent pure commodity.  The REE distributions found in coal and coal by-products can exhibit a compositional distribution that could command a higher basket price than some of the more conventional or well-recognized REE ores.

Reserve Estimates
An initial assessment of the amount of REES that is likely to be found in coal deposits and associated mineral matter was performed by DOE-NETL in 2014-2015.  These estimates indicated that approximately 6 million MTs of REEs could potentially be recovered from known coal reserves in select western state coal basins in Montana, Wyoming, Colorado, Utah, New Mexico and Arizona.  Similar estimates indicated that nearly 5 million MTs were potentially available among the coal deposits found in Pennsylvania, West Virginia, Kentucky and Virginia.  In addition, separate estimates were made for the total tonnage of REEs that might be available in coal ash and coal mine refuse, and these estimates suggested several additional million MTs of REEs could be found in these sources as well.  The actual amounts that can be recovered would ultimately be a function of mining practices, the ease of extraction of REEs from the base feedstock material, and the overall process economics.

Recovery Opportunities
Long-term opportunities to economically recover REEs from coal and coal-based resources depend not only on RD&D that is focused on near-term technical and economic feasibility success, but also on leveraging the knowledge gained to develop novel recovery concepts that are applicable to low REE concentration feedstock materials.  These new processes and systems must incorporate steps to recover, separate, and refine REEs without generating additional unwanted products.  These advances may facilitate recovery of REEs from large volumes of fly ash and bottom ash, as well as other low REE-containing materials as acid mine drainage effluents and/or sludges.  Moreover, co-production of REEs with other useful materials that are present in coal-based resources offers the potential to further enhance the economic viability of REE recovery.  The following schematic illustrates the coal value chain as it relates to opportunities to recover REEs.

In 2009, interest in strategic materials intensified culminating in discussions regarding our Nation’s ability to secure reliable supplies of rare earth metals and other strategic materials.  Strategic materials were identified as critical for growing the U.S. green energy and electronics industry, as well as for specialty military applications.  In 2010, the DOE released the first Critical Materials Strategy and NETL initiated as small effort to explore the concept of extracting rare earth elements from coal and coal by-products.  Congress has since recognized the importance of this resource to the U.S. economic security and appropriated funding in FY2014 to identify the magnitude of the resource, develop capabilities to economically recover rare earth metals in an environmentally responsible manner, and provide an additional domestic, secure, and reliable resource for future advanced domestic industries.

In 2014, NETL further expanded its efforts to assess the potential resource base for REEs contained within coal resources and coal by-product waste streams from coal cleaning operations and power plants - post combustion fly ash and bottom ash.  Initial research identified potential ‘hot spots’ in select coal seams for REEs, and confirmed that the quantity of these elements varied depending on geology, location, and other factors that were not well understand at that time. Efforts to explore the available technology for extracting these vital elements were undertaken leading to the conclusion that additional research and technology development would be needed to convert this resource into a viable domestic commodity - and thus, the beginning of DOE-NETL’s Feasibility of Recovering Rare Earth Elements program [1] .

Performance of the assessment and analysis of the feasibility of economically recovering REEs from coal and coal by-products continued in 2015 [2]. In 2016-2018, Congress directed the DOE-NETL REE program to expand its external agency activities to develop and test commercially viable advanced separation technologies at proof-of-concept or pilot-scale that can be deployed near-term for the extraction and recovery of rare earth elements and minerals from U.S. coal and coal by-product sources having the highest potential for success [3-5].

FY14 to perform an assessment and analysis of the feasibility of economically recovering rare earth elements from coal and coal by-product streams, such as fly ash, coal refuse, and aqueous effluents

FY15 to continue activities to economically recover rare earth elements from coal and coal by-product streams, such as refuse, and aqueous effluents

FY16-FY17 to expand its external agency activities to develop and test commercially viable advanced separation technologies at proof-of-concept or pilot scale that can be deployed near term for the extraction and recovery of rare earth elements and minerals from U.S. coal and coal by-product source showing the highest potential for success

FY18 to continue its external agency activities to develop and test advanced separation technologies and accelerate the advancement of commercially viable technologies for the extraction and recovery of rare earth elements and minerals from U.S. coal and coal by-product sources

The mission of DOE-NETL’s Feasibility of Recovering Rare Earth Elements program is development of an economically competitive and sustainable domestic supply of rare earth elements (REEs) and critical materials (CMs) to assist in maintaining our Nation’s economic growth and National Security.

Through its metrics, DOE-NETL’s Feasibility of Recovering Rare Earth Elements program fully supports Congressional directives to continue its external agency activities to develop and test advanced separation technologies, and to accelerate the advancement of commercially viable technologies for the extraction and recovery of rare earth elements and critical minerals from U.S. coal and coal by-product resources.

In summary, DOE-NETL’s Feasibility of Recovering Rare Earth Elements program is focused on

Since 2014, the DOE-NETL Feasibility of Recovering Rare Earth Elements program has grown to a portfolio containing approximately 25-30 active intramural and extramural research, development and demonstration (RD&D) projects that are performed by professionals in extramural small businesses and universities, and scientists and engineers within NETL’s in-house Research and Innovation Center (RIC), as well as at alternate DOE national labs including the Los Alamos National Laboratory (LANL), Lawrence Livermore National Laboratory (LLNL), Idaho National Laboratory (INL), and Pacific Northwest National Laboratory (PNNL).  Funding for conduct of the Feasibility of Recovering Rare Earth Elements program has been at a level of $15M/year between 2014-2018.  Funding levels were increased to $18M in 2019. 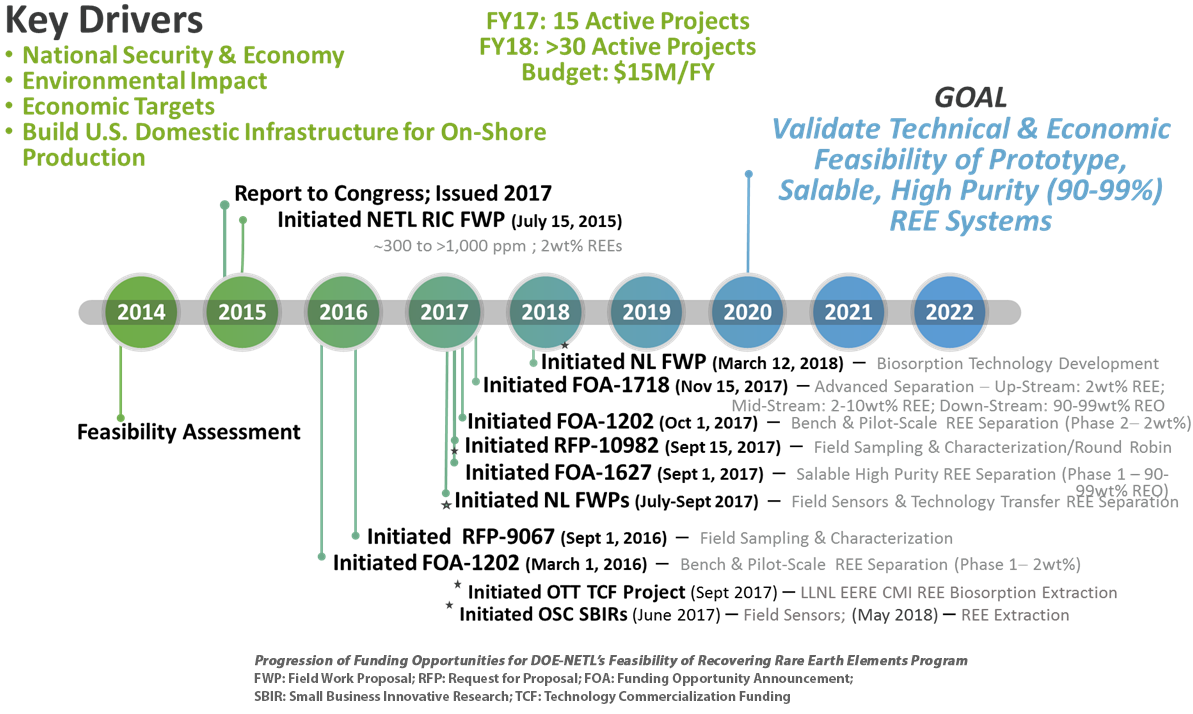 In 2018-2019, DOE-NETL began to expand its efforts to include production of rare earth metals (REMs) under a Small Business Innovative Research (SBIR) opportunity announcement - thus extending RD&D efforts within the REE value chain. 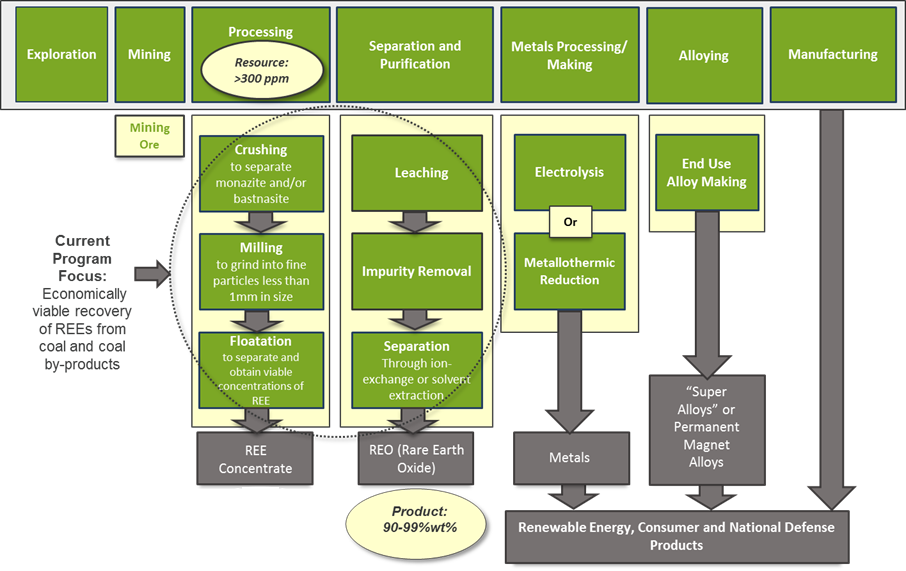 Major Technical Accomplishments
Numerous technical accomplishments have been achieved during conduct of the REE intramural and extramural projects since initiating DOE-NETL’s Feasibility of Recovering Rare Earth Elements program in 2014.  The following timelines highlight the major accomplishments with respect to the extraction and separation of REEs contained in coal-based materials, from concentrating the 300 ppm REE levels in feedstock materials to over 800,000 ppm, to recently leading to the production of small quantities of REEs in domestic bench-scale and pilot-scale facilities - University of Kentucky, West Virginia University and Physical Sciences Inc. - in 2019.

DOE-NETL’s Feasibility of Recovering Rare Earth Elements program has demonstrated the technical feasibility of extracting REEs from coal-based materials. During FY2018, the program has moved into bench- and pilot-scale materials processing. Technology and engineering scale-up challenges and opportunities are being addressed, as well as the economic feasibility for operation of continuous REE recovery systems.  Validation of small domestic prototype REE separation and recovery pilot-scale facilities to produce high purity REOs, process system optimization with production efficiency improvements, and production of REMs and CMs, remain as the future direction of the DOE-NETL Feasibility of Recovering Rare Earth Elements program.

External stakeholders who have previously been under contract to NETL, and external stakeholders who are currently participating on projects, as well as NETL Research and Innovation Center (RIC) scientists and engineers are acknowledged for their many technical contributions to DOE-NETL’s Feasibility of Recovering Rare Earth Elements program.

The Feasibility of Recovering Rare Earth Elements EDX Portfolio contains a comprehensive set of all publicly available data that were produced during a Congressionally funded assessment and analysis of the feasibility of economically recovering REEs from coal and coal by-product streams such as fly ash, coal refuse, and aqueous effluents. All publicly available datasets are accompanied by supplemental information that provides context on why, where, and how the data were collected. 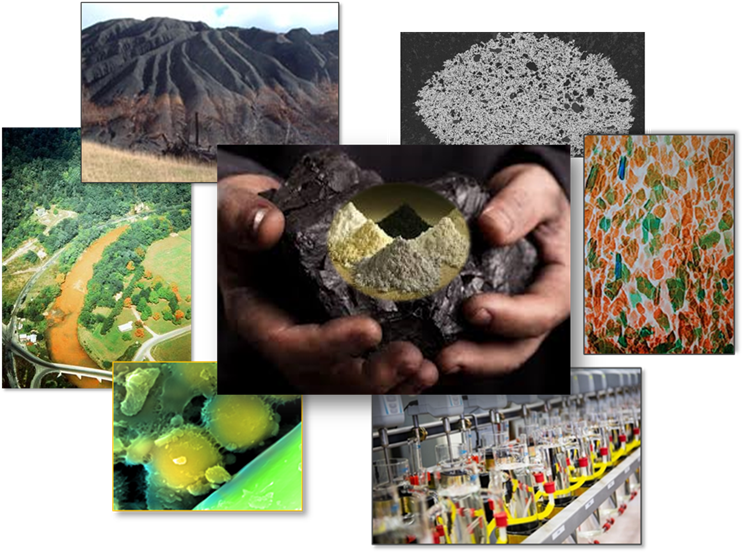