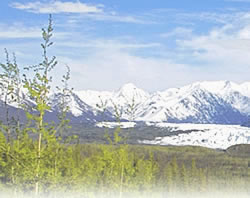 Alaska’s fossil energy resources will likely play a greater role in meeting the nation’s energy needs in the future. Alaska holds about one-fifth of America’s remaining proved oil reserves, large accumulations of associated natural gas awaiting a means to reach a market, and over half of the nation's coal resources. When stranded North Slope natural gas and unconventional oil and gas resources, such as viscous oil, coal bed natural gas, and methane hydrates, are factored in, the energy resources found in Alaska are astounding. Despite Alaska’s energy wealth, producing and delivering those resources to the rest of the United States, as well as providing affordable power to Alaska’s rural villages, continues to be a challenge. NETL’s Arctic Energy Office coordinates with industry, academia, and other government agencies to demonstrate the value of Alaska’s fossil fuel resources to the nation and Alaska’s rural community while maintaining the pristine environment in which they are contained.

Environment
The Arctic Energy Office concentrates on environmental issues concerning development of Alaska’s resources, such as fragile tundra, permafrost, and wildlife protection. Preserving the ecosystems of the Alaskan wilderness is a major consideration of the program. The Arctic Energy Office coordinates with state agencies and academia to deliver research that will address environmental issues limiting oil, gas, and coal development in Alaska.