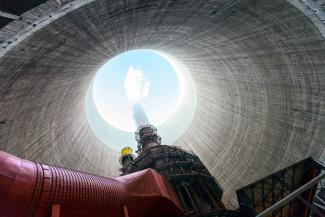 Working with university and industry partners, NETL is finding new ways to use concrete, a widely available and inexpensive building material, to create next-generation energy-storage systems and ensure the availability of reliable, affordable electricity as the nation shifts to renewable sources such as wind and solar.

Concrete thermal energy storage (CTES) systems may be significantly less expensive than other technologies and have the potential to meet longer-duration storage needs, which will be critical as more renewable intermittent energy sources come online.

NETL-supported projects under way are investigating how to transfer high-temperature, high-pressure steam produced by fossil fuel-burning power plants to concrete modules, where the thermal energy can be stored until needed and returned to the power plant to generate electricity in response to grid demand.

As the research arm of the U.S. Department of Energy’s Office of Fossil Energy (FE), NETL is developing a comprehensive strategy to expand FE’s current portfolio to include an Energy Storage Technology Research Program.

Fossil fuel-fired plants are designed to generate power while operating at continuous maximum capacity and efficiency. However, with more renewables on the grid, conventional coal-burning plants are required to operate at minimum loads for longer periods of time. Such deviations from maximum efficiency increase fuel consumption and emissions. Plus, reduced downturn of fossil energy plants causes extreme stress and wear to steam-raising equipment.

“Here’s another way to look at it: CTES systems will permit utilities that burn coal or natural gas to run at high efficiency during down times and save the energy they produce for rainy days. When renewable forms of energy such as solar aren’t available because there’s no sunshine, steam in the CTES system can be tapped to keep American homes, businesses and industries supplied with the electricity they need,” Briggs said.

The Electric Power Research Institute (EPRI) has partnered with NETL to design and build a pilot-scale CTES facility. As designed, high-pressure steam from the power plant will flow through tubes to heat concrete modules, which will store the thermal energy until it’s returned to the power plant to generate electric power and meet grid demand.

The 10-MWh CTES system will be integrated into a coal power plant, providing a slipstream of high-temperature steam for testing. The site chosen for the field test is Southern Company’s Gaston Steam Plant near Wilsonville, Alabama. Testing, which is scheduled to begin in September 2021, will establish the capabilities of the CTES system in a real-world environment and demonstrate its ability to handle flexible operating conditions.

At Lehigh University in Bethlehem, Pennsylvania, research supported by NETL has begun to develop a prototype of a novel CTES concept. The integrated system consists of concrete with embedded thermosyphons. The thermosyphons are filled with a fluid that can retain heat and quickly transfer it into and out of concrete block.

Next steps for Lehigh researchers include exploring various methods to minimize cracks in concrete subjected to harsh environments, as well as testing at laboratory scale and prototype scale at a Dominion Energy power plant in Virginia.

“The addition of renewable energy into the grid means conventional power plants must adapt to new power generation realities. The projects NETL is advancing with EPRI, Lehigh and other partners focus on using a relatively inexpensive material to keep these plants running at high efficiency while enhancing their role as contributors to grid stability,” White said.