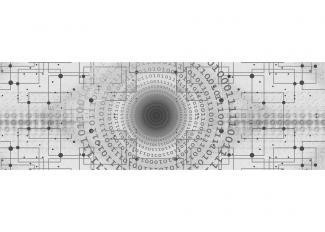 Through the integration of experimental information and computational sciences, scientists and engineers can efficiently simulate multitudes of technology variations to save time, money and materials. CSE work enabled advancements in several areas of NETL research in 2019, including significant achievements in multiphase flow science and carbon capture technology development.

Multiphase Flow Science
Multiphase flow science refers to the study and understanding of the flow of liquids or solids with different chemical properties. Systems with multiphase flow, such as highly efficient gasifiers capable of converting coal into valuable fuels and chemicals, are difficult to model. However, NETL has developed an open-source, internationally-used computer modeling suite called Multiphase Flow with Interphase eXchanges (MFiX) to accurately simulate these technologies.

IWTU is a DOE facility designed to treat 900,000 gallons of radioactive liquid waste by heating and then essentially drying it into a solid granular material suitable for long-term storage. The heat required in this process is created by a denitration mineralization reformer (DMR), in which coal, steam, air and oxygen interact. Because this mixture contains multiple phases of matter (i.e., solids and gases), an understanding of multiphase flow is critical for design and troubleshooting.

NETL is a globally recognized leader in multiphase flow, so when IWTU encountered an issue with its DMR, NETL’s expertise was requested. Using MFiX, NETL researchers demonstrated that the problem — solids accumulating or agglomerating in the lower regions of the DMR — was inherent to the DMR’s design and could not be overcome under normal operating conditions.

NETL researchers then began a highly successful collaboration with the Idaho National Laboratory to create MFiX simulations that screened three alternative reactor designs under a range of conditions. The simulations were pivotal in the design selection and guided both sub-scale and full-scale experiments. This computational approach eliminated the need to test each design under a range of operating conditions at full scale, saving tens of millions of dollars in the design phase alone. IWTU made the selected design change to the DMR, which was successfully tested with no evidence of further accumulation of solids.

NETL researchers collaborated with researchers from the University of Pittsburgh to model the cost of carbon capture for more than 1 million hypothetical mixed matrix membrane (MMM) materials using powerful computational tools. Their work is highlighted in the high-impact journal Energy and Environmental Science.

Membrane-based CO2 capture uses permeable or semi-permeable materials that allow for the selective transport and separation of CO2 from flue gas. The computational modeling project focused on MMMs that incorporate porous nanoparticles, known as metal-organic frameworks, into the matrix of a sturdy polymer to enhance selectivity and permeability. The team leveraged NETL’s computational capabilities to connect atomistic simulations to techno-economic analyses of the membrane-based carbon capture process. NETL efforts identified the best combinations of polymers and nanoparticles to make novel membranes with outstanding properties for carbon capture.

The techno-economic analyses indicated that 1,153 of more than 1 million MMMs could reduce the cost of carbon capture to less than $50 per metric ton of CO2 removed — within reach of DOE’s goal of $40 or less for pulverized coal plants.

NETL will rely on the project’s results to focus and refine ongoing efforts to develop innovative membranes that effectively capture CO2 at an affordable cost as the Lab continues work to ensure clean, reliable use of the nation’s abundant fossil energy resources.

As these 2019 successes demonstrate, the advancements of computational resources play a pivotal role for expanding the impact of valuable physical experiments. Consider the evolution of genetics as another example. Between 1856 and 1863, Gregor Johann Mendel conducted a series of pea plant experiments that established rules of heredity and became the basis for modern genetics. By 2003, genetic researchers had successfully mapped the entire human genome in just 13 years with the help of the most advanced computers of the time. With today’s exponentially increasing computational resources, researches can complete the same task in less than two days.

The evolution of computational science and engineering has similarly brought a paradigm shift in fossil energy research. Design and scale-up that formally required 20 or more years can now be accomplished in a fraction of the time and with far fewer resources. DOE houses some of the world’s fastest supercomputers, including NETL’s Joule 2.0. These massive computational resources are accelerating research at an even faster pace, ensuring that Americans reap the benefits of more affordable and reliable energy sooner than ever.