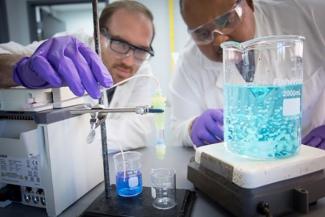 NETL research has resulted in a technology that offers a practical, affordable and green approach to removing the threat of lead and other heavy metals from streams that ultimately contaminate the drinking water of American homes – a threat that jeopardizes the health of millions of children – and can also help recover valuable rare earth elements (REEs) from water supplies.

The heart of the technology is an NETL-developed material known as basic immobilized amine/silica sorbent (BIAS). It was initially developed to separate gases as part of carbon capture research and has received numerous awards and recognitions for its effectiveness.

NETL’s McMahan Gray led a Laboratory team consisting of Brian Kail, Walter Wilfong, Qiuming Wang, Fan Shi, Tom Tarka, and Tuo Ji that had ideas for wider applications for BIAS. They adapted the core BIAS technology to create a product that resists water, is regenerable, and can target heavy metals and even REEs from water supplies.

Amines are compounds that are derivatives of ammonia created when one or more hydrogen atoms are replaced. Sorbents are materials or substances that collect molecules of another substance by either physical or chemical sorption. Only 100 microns in diameter, the tiny white pellet looks like a grain of very fine sand. When ounces or even pounds of these pellets are put together, they can remove contaminants down to the parts per trillion level.

An additional possible application of the work is a home-based water filter that can be recycled repeatedly, saving money and resources. The home-based application could remove lead that water may pick up as it moves through pipes from previously treated municipal sources to individual houses, and its regenerative/recycling capability makes it environmentally desirable. The water crisis in Flint, Michigan, made headlines and contaminated water continues to affect many Americans. Filters using NETL’s technology could allow millions of Americans to economically control the quality of the water they use every day.

The BIAS technology can also be a key tool for answering another critical need for the nation: REEs. Natural water systems like rivers, groundwater, seawater and even acid mine drainage streams are viable sources for REEs – integral components of high-technology products from smart phones and lasers to computer hard drives, medical devices and national defense systems. REEs are not that rare, they just appear in miniscule concentrations in a variety of sources.  BIAS has promise to be an effective way to collect REEs from water supplies.

Gray said the NETL innovation is significant because of the growing demand for REEs and the need for economically feasible approaches for REE recovery from domestic sources. He added that compared to existing sorbent materials, the BIAS materials developed at NETL for REE recovery are easily prepared, structurally stable, recyclable over multiple cycles, and capable of capturing a variety of REEs from flowing aqueous streams with low REE concentrations.

In 2018, NETL partnered with PQ Corporation — a leading, highly diversified global provider of specialty catalysts, specialty materials, chemicals, and services — in a partially exclusive license arrangement to commercialize NETL’s BIAS technology. PQ Corporation, which is based in Malvern, Pennsylvania, has a long history of working with municipal water treatment facilities, oil and gas drilling industries, and producers of precious metals, making the company an excellent partner for commercializing the BIAS technology.