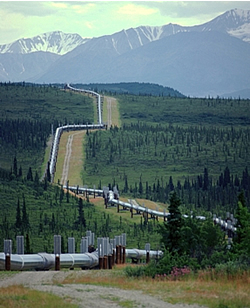 Additional oil production from known resources as well as new discoveries are essential for keeping the Trans Alaska Pipeline System (TAPS) operating both technically and economically. The lower limit of effective operation for TAPS is in the range of 200,000 barrels per day. Current production rates are about 700,000 barrels per day down from a maximum of over 2 million barrels per day in 1988. The economic limit of TAPS will depend on world oil prices and operating costs, but as oil production rates continue to decline, the tariffs can be expected to increase, affecting the economic viability of all North Slope production. With currently producing and identified development, the TAPS minimum flow rate could be reached as early as 2045 and strand over a billion barrels of oil currently booked as reserves (economically producible). Maintaining the viability of the TAPS pipeline is essential for maintaining access to undiscovered North Slope resources and requires access in a timely manner to the most promising areas for exploration and development, such as all of National Petroleum Reserve Alaska, and the Outer Continental Shelf. 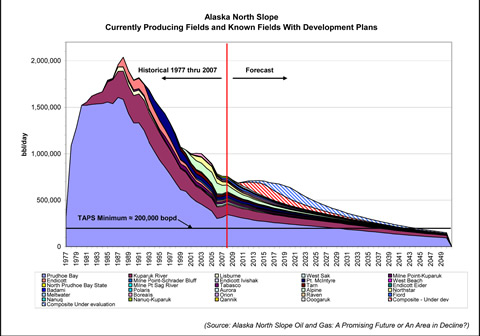