The goal of the project is to characterize hydrates in the Gulf of Mexico (GOM) and further develop field techniques for characterizing hydrates.

This project will acquire, process and evaluate offshore geophysical data and gather and analyze physical samples of gas hydrates in the GOM. Specific project objectives are seismic data acquisition and processing, the gathering and analysis of physical samples of hydrate-containing sediments via piston cores, and the measurement of hydrate sediment properties through laboratory experiments.

This project has already had an important impact on our understanding of fundamental properties of natural gas hydrates from the earlier sponsored laboratory and field studies in the Atlantic Ocean and the Gulf of Mexico. The collection of seismic data on multiple cruises and piston cores on the R/V Marion Dufresne at important gas hydrate sites in the Gulf of Mexico have been used to evaluate potential drilling sites in the Joint Industry Project (JIP) lead by ChevronTexaco and the National Energy Technology Laboratory (NETL). Ultimately, the collective data gathered and interpretation made by the USGS will enhance our understanding of both the resource potential and seafloor safety and stability of gas hydrate deposits in the GOM. 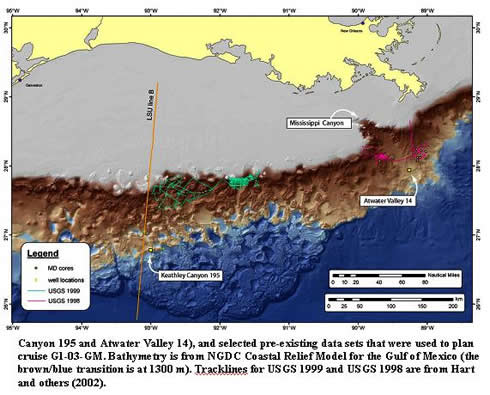 Accomplishments are summarized for the period from 1997 to April, 2005 and cover the larger research accomplishments, which are divided in field and laboratory experiments. The geophysical and field sampling programs include 5 experiments conducted between 1998 and 2003 in the Gulf of Mexico (four cruises) and on the Blake Ridge (one cruise). Significant results from the Gulf of Mexico include advancing knowledge of gas hydrate as a potential hazard to drilling at a time when petroleum exploration and production move into deeper water on the continental slope. Anomalous bright reflections called high-reflectivity zones (HRZ’s) were identified as possible seismic indicators of gas hydrate. Subsequent sampling through coring identified how methane flux changes from vent regions into mini-basins, and could explain the lack of a known Bottom Simulating Reflection (BSR) in much of the Gulf. In conjunction with the Chevron Gulf of Mexico JIP project, two site surveys were run to characterize gas hydrate prior to drilling in 2005, including detailed analysis of a BSR reflection at one of the sites. The one cruise to the Blake Ridge collected core samples to test the origin and age of the Blake Ridge collapse feature. While the cruise results were equivocal, they results raised new questions about the timing of methane release from hydrate in this well-studied natural laboratory field site. These field programs, particularly in the Gulf of Mexico, helped further DOE goals of understanding gas hydrates in areas where deep-water drilling and production were likely to penetrate the gas hydrate stability zone. Laboratory experiments were generally integrated with field studies but addressed specific questions about methane hydrate behavior and properties. Studies in the Gas Hydrate and Sediment Testing Laboratory Instrument (GHASTLI) performed some of the first physical property measurements on hydrate-sediment mixtures at simulated in-situ temperatures and pressures. These experiments showed the importance of grain size to hydrate occurrence, and demonstrated how the technique for making hydrate can significantly affect hydrate occurrence in the sample. The thermal properties laboratory made comprehensive thermal characterization of synthetic hydrate demonstrating the linear and non-linear behavior of the material in certain parts of the hydrate stability zone. From the petrophysics laboratory came detailed measurements of physical properties of pure methane hydrate as compared to ice and other hydrocarbon hydrates. This laboratory also developed a cryogenic Scanning Electron Microscope (SEM) capability that has been used to analyze samples returned from the field programs. Most laboratory experiments also included measurements in support of the major DOE-cofunded drilling programs (ODP Leg 204, Mallik, and Hot Ice). These laboratory studies also support DOE objectives of developing well-constrained parameters to use in modeling studies.

The project has been completed.

In addition to the information provided here, a full listing of project related publications and presentations as well as a listing of funded students can be found in the Methane Hydrate Program Bibliography [PDF]. Final Report [PDF-248KB] - June, 2006