The objective of this study was to test the hypothesis that gas hydrate dissociation in marine sediments was associated with and may actually have driven millennial scale climate change during Marine Isotope Stage (MIS) 3 and during other time periods in the late Quaternary. An investigation of the nature of deposition and alteration of the methane hydrate in cores from the Umnak Plateau in the southeastern Bering Sea was conducted in an attempt to confirm this hypothesis, originally established from cores gathered in the Santa Barbara Channel offshore California. Overall, the goal of this effort was to improve our understanding of the effects of methane hydrate on climate change.

The stability of methane hydrate deposits is a matter of concern because it is possible that developing their energy potential could also promote their dissociation, and the release of free methane to the ocean and atmosphere. The largest and most sudden climate warming in the last 60 million years (my), the late Paleocene thermal maximum at about 59 ma (milliannum), is thought to have been caused by methane release from the deep ocean to the atmosphere.

Foraminifera from sediments cored in Santa Barbara Basin contain unusually low δ13C (Kennett et al., 2000). The low δ13C is associated with alternations of laminated and nonlaminated sediments, and paleoceanographic evidence for warming and cooling that was found to correlate precisely with the millennial to centennial climate oscillations documented in the Greenland ice sheet over the past 60 kyr. For every warm episode in Greenland ice, there is a corresponding surface water warming and bottom water warming in the laminated sediments of Santa Barbara Basin. In particular, two laminated intervals in MIS 3 (~25-60 ka) contained planktonic foraminifera with δ13C much lower than open ocean ΣCO2. One way to account for δ13C events—as much as 3 ‰ (permil) below baseline—is through oxidation of enough methane in the water column to draw down local δ13C of ΣCO2. The presence of methane hydrate in Santa Barbara Basin is known from seeps and from the presence of a bottom simulating reflector, and Hinrichs (2003) identified biomarkers for anaerobic and aerobic methane oxidation in samples from Kennett’s core. Thus, Kennett et al. (2000) suggested that during MIS 3 there may have been two processes operating to liberate methane. First, methane was oxidized at the seafloor during bottom water warming. Second, more catastrophic events such as earthquake-driven slumps may have occasionally reduced sediment overburden and led to methane hydrate dissociation (Paull et al. 1996) and lower δ13C in the water column.

This project investigated the link between methane hydrates and climate in sediments from the Umnak Plateau in the southeastern Bering Sea collected during the summer of 2002 by Dr. Keigwin of the Woods Hole Oceanographic Institute. Preliminary sampling of Umnak Plateau core 51JPC (~1500 m) for stable isotopes in foraminifera revealed five events of δ13C in MIS 3 as low as -12 ‰. This project developed the stratigraphy and chronology of these and other Umnak Plateau cores from a range of water depths between 700 m and 2000 m. For the first time, the reproducibility of δ13C minima was tested in multiple cores, and because the cores span a range of water depths the potential existed to develop a three dimensional picture of possible methane hydrate dissociation.

The primary benefit of this research is the increased knowledge regarding the potential role of seafloor methane hydrate in the climate system. Previously, there was only one known location where aerobic (water column) oxidation of methane during some of the warm events of MIS 3 had been proven. Preliminary δ13C data from this study indicates that there are more events in Umnak Plateau sediments than have been identified in Santa Barbara Basin. Linking unequivocally these events from the Bering Sea with aerobic methane oxidation through the biomarker studies, could provide strong support for the hypothesis that methane release from the seafloor has driven climate oscillations during the last glacial cycle.

Before the geochemistry of methane diagenesis at the Umnak Plateau sites could be fully understood, a firm stratigraphic and chronologic framework in the cores needed to be established. This was accomplished using several methods, including stable isotope ratios of carbon and oxygen in foraminifera, paleomagnetism, and accelerator mass spectrometer (AMS) 14C dating. Sampling from the cores was then based on this stratigraphic framework.

A paleomagnetic study of Umnak Plateau cores, was conducted by Dr. Steve Lund of the University of Southern California. Dr. Lund correlated two cores using, among other techniques, the unique combination of magnetic inclination, declination, and paleointensity, beginning with 51JPC and then continuing with other cores available for analysis. The position of the Laschamp Excursion (a brief reversal in Earth’s magnetic field about 40,000 years ago) in core 51JPC and core 57JPC was established by this work.

Incorporating the paleomagnetic analysis and using core 51JPC as the “type section”, a correlation across all of the cores used in this project was established. Based on this correlation and calculated average sedimentation rate about 150 samples at 10-cm spacing (=200 years) was considered adequate to resolve millennial scale events in the “type section” core and about 100 samples were taken from each of the other cores selected for sampling. In all, about five hundred (500) samples were collected from four (4) cores.

Planktonic foraminifer Neogloboquadrina pachyderma (sinistral) and benthic foraminifer Uvigerina peregrina were selected for subsequent stable isotope analysis and 14C dating. For both cores large negative excursions in δ13C were observed for the sections representing the last glacial maximum. The low δ13C is associated with high δ18O and, upon visual inspection, the foraminifera show evidence of post-depositional overgrowths of authigenic carbonate minerals suggesting a high flux of methane or methane-bearing fluids upward in the sediment column.

The co-PI, Dr. Mea Cook, together with Professor Kai-Uwe Hinrichs at the University of Bremen attempted to isolate archaeol, a biomarker of archaea that perform anaerobic oxidation of methane. The Archaeol were not found in sufficient concentrations to perform isotopic analysis, presumably due to degradation since 2002. Alternatively, the PI was able to isolate another class of compounds; glyceryl dibiphytanyl glyceryl tetraethers (GDGTs), which are produced by all archaea. The isotopic findings using GDGTs provide support that an active microbial community performing anaerobic oxidation of methane in the sediments existed in each episode where authigenic minerals were emplaced. The d13C depletion of these biomarkers occurs in sediments stratigraphically slightly below where authigenic carbonate minerals are present. This is consistent with a vertical flux of pore fluids, which would be the case if there was methane or methane-rich fluid advected upward in the sediment column. 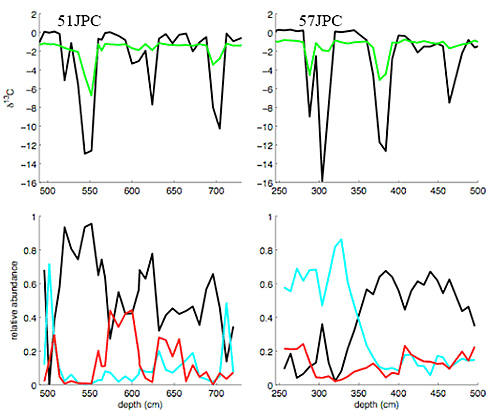 The benthic foraminifer relative abundances (bottom panels) for the three stratigraphically highest isotopic events in core 51JPC (left) and 57JPC (right). The data for U. peregrina, Nonionella sp., and Islandella sp. are plotted in blue, black, and red respectively. For reference, the δ13C stratigraphies are plotted in the top panels, where the black and green lines are the planktonic (N. pachyderma (s.)) and benthic (U. peregrina) foraminifer samples, respectively.

This project has been completed and the final technical report received. The results of the study suggests that the sedimentary methane reservoir in the Umnak Plateau region appears to be very dynamic, and interacted with the ocean system on millennial time scales during the last glacial period.