The goal of this project is to evaluate, design, drill, log, core and production test methane hydrate resources in the Barrow Gas Fields near Barrow, Alaska to determine its impact on future free gas production and its viability as an energy source. 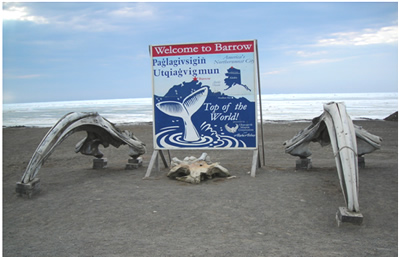 Phase 1 of the Barrow Gas Fields Hydrate Study provided very strong evidence for the existence of hydrates updip of the East Barrow and Walakpa Gas Fields. Full-field history matched reservoir modeling supported the postulation that these hydrate accumulations are interacting with the free gas reservoirs, providing pressure support through dissociation of the hydrates. These results demonstrate the value of the Barrow Gas Fields as a subject area for hydrate research. During Phase 2 a production test well will be designed, drilled, logged and cored, and continuous reservoir surveillance and monitoring program will be implemented to prove the commercial potential of producing Class 1 hydrate accumulations through depressurization dissociation from the gas zone underlying the hydrates.

The outcome of this study is broadly applicable to gas hydrate research in the arctic environment, and particularly to accumulations associated with free gas zones. The study will complement and build on current and past gas hydrate studies in Alaska, Canada and Russia, and will utilize and develop tools for exploring and exploiting gas hydrate in arctic environments. This project has significant potential to identify opportunities to broaden the research effort in the Barrow Gas Fields, and to act as a catalyst to expand research efforts throughout and beyond the Central North Slope.

The Barrow Gas Fields are unique on the North Slope, in that they represent a commercially viable, in fact critical, gas resource, whereas the natural gas associated with the giant North Slope oil fields has no market without a pipeline. This project has potential to impact the long-term development of the Barrow Gas Fields, as methane gas hydrate appears to represent a recharge mechanism to the free gas fields currently in production. Understanding the influence, if any, of gas hydrate associated with the Barrow Gas Fields could weigh heavily in decisions on future development drilling, compression requirements and water handling needs, and will influence decisions on expansion of energy provisions to Barrow and outlying villages in the North Slope Borough.

This Phase 2 project began December 1, 2008. On January 22, 2009 representatives from the NSB and PRA attended a project kick-off meeting in Morgantown, WV (see "Additional Information" below to view the Phase 2 kick-off presentation). PRA presented findings from the Phase 1 effort and the compelling evidence that hydrates occur in the Barrow fields. Reservoir modeling work directed at locating optimal well sites was presented as were initial plans for coring to confirm hydrates, and then drilling a production well and an observation monitoring well to confirm hydrate dissociation during production testing.

PRA has completed a well design and instrumentation plan. The plan describes the basis for re-evaluating the optimal well location in East Barrow field. Well log analysis provided by the USGS indicates that little to no hydrates were present at well location No. 19 when this well was originally drilled and logged. In addition, a high angle (“horizontal”) well from this location would require a relatively aggressive build rate of ~9 deg/100’ using a kick-off point of 1300’. Conversely, well location No. 18 has many of the same attributes as well No. 19 but would not require such an aggressive build rate and did show evidence of hydrates when the well was originally drilled.

The well design and instrumentation plan was reviewed on April 6 by the Technical Advisory Group. Their input guided the development of the Request for Proposals (RFP) and evaluation of drilling contractor bids. The RFP was released July 10 with responses due August 21, 2009. Bid proposals will support the Authority for Expenditure (AFE) Report which will include the cost of drilling, logging, coring and completing the proposed hydrate/production test well(s) and for the hydrate test well and reservoir surveillance program. The report will support a go/no-decision by DOE and the North Slope Borough to proceed to the next phase of the project-full-field production test drilling and long-term surveillance. If the decision to proceed is granted, drilling is expected to commence during late summer or early fall of 2010.

The contractor, Petrotechnical Resources of Alaska (PRA), completed the East Barrow and Walakpa Plan of Operations; a living document that will be updated as the project progresses. PRA also drafted three volumes related to the coring and analysis of methane hydrates. These volumes include Core Acquisition, Core Handling, and Core Analysis. The documents have been reviewed by TAG members and their comments were incorporated.

Efforts to define all regulated surface activities and contingencies resulted in a draft “Permitting Plan of Operations” which lists all potential permits and regulatory approvals necessary and preparation of a critical path decision point schedule.

Recent efforts have focused heavily on permitting issues and on the development of the Authorization for Expenditure (AFE) which forms the cost basis for the remaining phases of the project based on bid proposals from drilling and operations contractors. A final AFE was received by DOE on November 16, 2009. On December 14, DOE notified the North Slope Borough that due to increased cost estimates, continued perceived technical risk, and current fiscal budget constraints, a decision had been made to discontinue the project. The Final Scientific Technical report is available below under Additional Information.