The goals of this research are to characterize the source, magnitude, and temporal variability of methane seepage from two representative thermokarst lake areas within the Alaskan North Slope gas hydrate province, and to assess the vulnerability of these areas to ongoing and future arctic climate change.

Atmospheric methane is a potent greenhouse gas. Predicted increases in methane flux, connected in large part to expected changes in the thickness of permafrost, will in turn affect atmospheric methane concentrations. However, knowledge gaps remain regarding nearly all aspects of past and present methane emissions from terrestrial arctic sites, thus limiting the accuracy of climate change models used to predict fluctuations in methane flux under various climate warming scenarios. Assessing changes in the size or intensity of terrestrial arctic methane seeps as both a possible cause and a probable effect of future climate change requires a baseline understanding of (1) the contemporary factors controlling the spatial distribution and temporal frequency of arctic methane emissions, (2) the key methane sources, and (3) the associated methane flux. This research program is largely designed to address these critical needs.

Related to the overarching issue of present and future arctic methane emissions is the more focused problem of the potential of arctic methane hydrate deposits to effect a change in global climate. Much of the published research on methane hydrates purports to be partially motivated by the potential that global warming could lead to dissociation of a portion of the global hydrate reservoir, which may in turn exacerbate warming if/once the methane reaches the atmosphere. Terrestrial permafrost gas hydrates are thought to be particularly susceptible to climate forcing since the overlying thermal buffer of ocean water is absent. At the same time, the absence of ocean water (where much of the methane emitted at the seafloor may dissolve or be oxidized) also means that dissociation of permafrost hydrates could lead to more direct and presumably more efficient methane transfer to the atmosphere. To date, no study has proved that dissociating methane hydrates contribute to arctic methane emissions, nor have sufficient field data been acquired to assess the potential for such a contribution in the future. This issue is central to the evaluation of the role of methane hydrates in climate change and will be directly, systematically, and quantitatively addressed in this project.

Laboratory analyses and synthesis activities conducted during this project will draw on the unique strengths and backgrounds of our multidisciplinary team from the University of Alaska and the U.S. Geological Survey, as well as other U.S. and international scientists with expertise in limnology, methane biogeochemistry, organic chemistry, microbiology, geophysics, hydrology, arctic permafrost dynamics, and gas hydrate systems. In addition, geophysical imaging will be conducted to gain a better understanding of the interaction among geologic structures, permeable lithologies, and fluid migration pathways; to image the thickness of the thaw bulbs beneath the lake; and to potentially capture an image of active seepage from a lake bottom and of trapped/migrating gas in the lake bottom sediments.

This project will be among the first to acquire direct, targeted data to assess whether permafrost gas hydrates are among the most susceptible to climate change. In the process of acquiring this data, cutting edge methane fingerprinting techniques will be used and extended to the terrestrial hydrate system for the first time. These developments will also advance the potential for methane source characterization in conventional methane systems and in the marine hydrate system and be of potential use to researchers on other DOE-NETL hydrates projects. This research will also provide robust data about contemporary methane flux from some of the most perturbed areas (thermokarst lakes and their thaw bulbs) of the Alaskan North Slope. This baseline data will be invaluable in decades to come as potential climate warming scenarios play out. At the same time, the methane flux data will help to further refine climate modeling and the contribution of atmospheric methane derived from arctic sources. Lastly, this project will increase the understanding of the relative roles of diffuse and discrete (seep) methane flux in terrestrial settings—a necessity for making progress on aspects of climate change and gas hydrate reservoir dynamics linked to climate change. In short, this project will have benefits in terms of broaching first-order scientific questions, developing new techniques and extending existing techniques to new environments, and building critical collaborations and knowledge sharing between marine and terrestrial methane seep and gas hydrate communities.

During the week of May 7–14, 2009, a team of eight scientists traveled to Akqasuk Alaska, a small village approximately 70 miles southwest of Barrow. Eighteen sediment cores were collected from Lake Qalluuraq (Lake Q) and two nearby lakes—far exceeding planned sampling expectations. All of the biogeochem cores were subsampled during the field work for biogeochemical analyses and pore water chemistry. Water samples were collected from locations without grounded ice for methane oxidation rate measurements and DNA analyses. Water samples were taken for oxygen and hydrogen isotope analyses, POC (particulate organic carbon) stable isotopes (C and N), and DIC (dissolved inorganic carbon) stable isotopes (C and O). Gas samples taken from the seep location were analyzed for gas, isotopes, and noble gas.

Summer field work was conducted at Lake Q from July 6 to 14, 2009. Sampling followed a similar protocol as was conducted in the May 2009 field work. In addition, in order to provide contextual information for the geochemistry, microbiological, and paleoclimate analyses, USGS staff collected Chirp seismic data, ground penetrating radar data, continuous resistivity profiles, lake-bottom sonar images, and images of methane plumes in the water column.

On October 22 and 23, 2009, USGS and UAF personnel conducted overflights in an attempt to identify potential target sites for the FY2010 field studies. More than 800 miles were surveyed on the Barrow peninsula in known seep areas near Atqasuk; over features that had been identified as potential targets on the central North Slope; and over old USGS methane project survey lines near Milne Point (close to Prudhoe Bay). Based on overflight observations and logistical considerations, Teshekpuk Lake, a 22 mile (35 km) wide lake on the Arctic coast 12 miles east of Harrison Bay, was selected as the 2010 field location.

Field studies were conducted from April 18 to 26, 2010. Five sediment cores were collected using a newly devised coring tool developed especially for the deeper (~ 5.5 meters) Lake Teshekpuk. The cores ranged in length from 70 cm to 569 cm and were subject to magnetic susceptibility measurements, radiocarbon dating, and limnological characterizations. The cores were also sub-sampled for biogeochemistry and pore water analysis. Water samples collected at Lake Teshekpuk were analyzed in the laboratory. The USGS returned to Lake Teshekpuk in July 2010 to conduct geophysical imaging of the lake bottom using equipment similar to that used on Lake Q in the summer of 2009.

Geophysical data from field work at Lake Teshekpuk in July 2010 clearly reveal changes in lake bottom sediments related to different sediments sources and drainage of adjacent lakes. These data and complementary water column imaging also provided information about the location and character of some of the methane-related features. The preliminary analysis of these surveys correlated well with the lithologies and boundaries detected during the May 2010 coring operation.

In addition to the field work at Lake Teshekpuk, second year activities at Lake Q were conducted by National Geographic researcher, Katey Walter. This effort collected gas samples from previously sampled gas seeps to assess temporal variations in gas flux to the atmosphere. A full year of data on dissolved gas concentrations and the diffusion flux of methane is now available. Dr. Walter has developed a new method of monitoring dissolved methane concentrations in aquatic ecosystems using tunable diode laser spectroscopy to facilitate long-term monitoring, and she has submitted a manuscript on this work to the publication Limnology and Oceanography: Methods.

The UAF Team has established a new field method to estimate the magnitude and variability in methane emissions from thermokarst lakes. Four classes of methane bubble clusters trapped in lake ice have been defined, representing distinct types of biogenic ebullition seeps that vary by flux. Assessment of the method revealed that ebullition seeps are an important component of the terrestrial methane budget; identifiable by seep type among independent observers consistent in different regions by flux; and that the largest source of uncertainty in upscaling is ecological differences within and between lakes. This new field method was published in Limnology and Oceanography: Methods (8, 2010, 592-609).

Studies aimed at identifying aerobic methanotrophs, their functional genes, and oxidation potential in sediments and water samples were completed, and analysis has shown that the highest methane oxidation potentials for water from Lake Q were found at the seep location whereas the highest potentials in the sediments were found away from the seep. Genetic pyrosequencing and amplification have shown that methane utilizing bacteria are diverse in the lake sediments and the biocommunity structure varies with sediment depth. Methanotrophs were successfully cultivated and 14 methanotrophs were isolated from the water samples. Methanotrophs isolated from the lake water appear to be largely different constortia than those detected in the sediments. A key finding is that methanotrophs were found to be 10,000 times more active under lake ice than during the open water season. Implications of early thaw on methane release to atmosphere are being analyzed.

Radiocarbon dating of sediment cores from Lake Teshekpuk have been generated resulting in what is believed to be the first record of sedimentation rate data for the lake (see figure below). 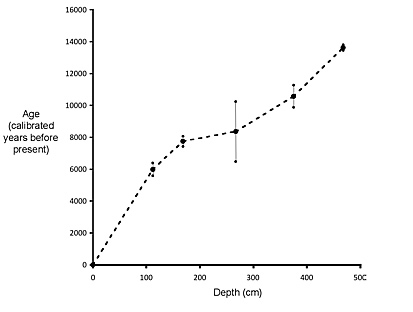 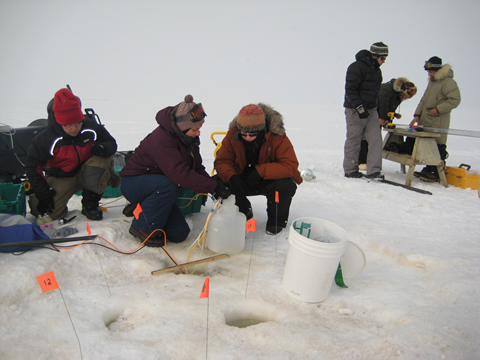 (January 2013)
All project tasks have been completed and the final report is available below under "Additional Information".

The project team has published the following articles. Due to copyright issues they are not available from this site.