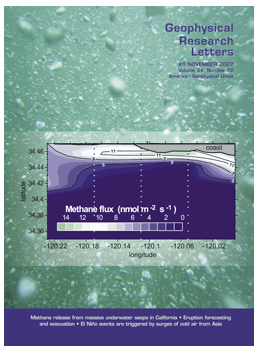 The global methane reservoir in the form of gas hydrate is estimated at 500–10,000 Gt (KVENVOLDEN, 1995; MILKOV, 2004). This pool of carbon resides in permafrost/sub-permafrost and sub-seafloor settings. Neither the rates of methane generation/loss from the reservoir are known, nor if the reservoir is currently growing, shrinking, or at steady state. Evidence suggests that the hydrate reservoir has been unstable in the geologic past (JAHREN et al., 2001; THOMAS et al., 2002), and the reservoir is now considered as a capacitor on geologic time-scales (DICKENS, 2003). Given the magnitude and potential instability of at least some portion of this reservoir, combined with the potency of methane as a greenhouse gas, it is critical to understand the natural processes that act to control the release of subsurface methane to the ocean and atmosphere.

One fundamental knowledge gap standing between methane hydrates and the carbon cycle at earth’s surface is an understanding of the physical, chemical, geological, and biological controls on methane release from the subsurface to the ocean and atmosphere. Physical, chemical, and geological controls tend to trap or otherwise hinder methane transport from the subsurface, and are of primary importance in determining the magnitude, distribution, and phase of subsurface methane reservoirs, as well as the flux of methane departing the subsurface to the ocean and atmosphere (ETIOPE and KLUSMAN, 2002; ETIOPE and MILKOV, 2004). However, only methanotrophy (biological methane consumption) is known to destroy methane in the ocean and shallow subsurface, and the efficiency of this “methanotrophic biofilter” through space and time is a critical factor controlling how much subsurface methane ultimately reaches the atmosphere.

The potential impacts of methanotrophy in marine waters extend beyond the issue of methane transport to the atmosphere. The biological consumption of methane in the ocean is potentially an important process in the global carbon cycle in its own right, particularly at times of enhanced subsurface methane flux, as might be associated with broad hydrate destabilization. Methanotrophy not only removes methane, but also consumes O2 and produces both CO2 and abundant biomass (HANSON and HANSON, 1996). These processes have potentially far reaching consequences, including contributions to ocean anoxia (SLUIJS et al., 2007), ocean acidification (ZACHOS et al., 2005), and direct inputs of organic carbon to the deep ocean. In order to understand the linkage between methanotrophy and these factors, and how they might feed into the carbon cycle and broader earth system, it is critical to first understand the nature of the process and the associated controls. 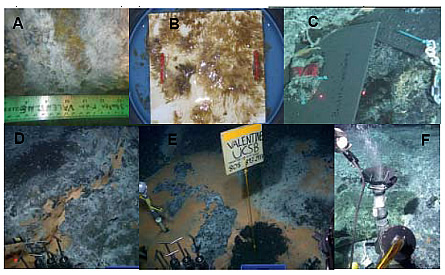 This project will provide insight into the relationship between the global carbon cycle and methane hydrate in regions of sub-marine methane hydrate occurrence and gas seepage. Results should create awareness of how benthic microbial communities impact the flux of methane from subsurface reservoirs to the ocean, the organisms involved, how active they are in several settings, and how they go about metabolizing methane. Results from both the closure of a basin-scale methane budget and research to identify the factors that most impact the aerobic biofilters can potentially be fed directly into global carbon cycle models to predict what might happen to the carbon cycle if a period of large-scale methane release into the oceans were to occur (i.e., gas hydrate dissociation).

In October 2008, the University of California – Santa Barbara (UCSB) initiated investigations of water column methane oxidation in methane hydrate environments. Benthic microbial mat samples incubated in situ at Coal Oil Point (COP) and in the Santa Monica Basin were collected and fed 13C isotopically labeled methane in the lab to determine methane uptake and turnover rates. Experiments revealed rapid turnover of methane and uptake of carbon 13 into COP mat biomass. Incubated microbial mats from the Santa Monica Basin showed sluggish rates of methane oxidation and little uptake of carbon 13. However, another mat community was identified in direct contact with methane hydrate that showed strong suggestions of active methanotrophy, which was used for subsequent analyses. Stable isotope probing (SIP) and DNA extractions from these samples were used to apply new phylochip technology developed at Lawrence Berkeley National Laboratory (LBNL) to provide a robust assessment of microbial community structure and population dynamics as they relate to methane oxidation.

Water sampling in both shallow and deep water in the Santa Barbara and Santa Monica basins was conducted on several independent excursions as well as during the Study on the Ecology and Evolution of Petroleum Seeps (SEEPS) 2009 (September 13–29, 2009) and SEEPS 2011 (September 13–29, 2011) cruises aboard the R/V Atlantis.The SEEPS 09 cruise provided enormous benefits to this DOE project by providing a platform for sampling known seep sites and for locating and verifying potential seep sites. Using the AUV Sentry, a new methane hydrate site at 900m water depth was discovered in the Santa Monica Basin and a significant previously unknown seep field at 200–250m water depth was found in the Santa Barbara Basin. This latter seep field will help project personnel better understand and model the methane budget within the Santa Barbara Basin, particularly in shallower waters, which have long been enigmatic as they display a persistent methane maxima but with an unknown previous source.

In May 2010, UCSB requested that their project scope be expanded to include sampling of oil-laden waters near Mississippi Canyon site 252. On June 11, researchers left Gulfport, MS onboard the R/V Cape Hatteras to study the fate of large methane releases in the Gulf of Mexico (GoM). UCSB researchers collected water samples during the 10-day “PLUMES” expedition to determine methane concentrations and develop a spatial distribution of the methane at the surface and at underlying depths. Researchers returned to the GoM on three additional expeditions between June and October to collect additional samples. UCSB researchers have analyzed over five hundred samples collected during these expeditions. These analyses included isotope labeling experiments and DNA extractions to assess methane oxidation rates and analyze the microbial communities in the GoM waters. In an article published January 6, 2011, in Sciencexpress (see Additional Information below), scientists on the PLUME and subsequent sampling expeditions in the Gulf suggest that within approximately 120 days from the onset of the BP incident nearly all the release methane was respired by a deepwater bacterial bloom. In one of two recent articles published in the Proceedings of the National Academy of Sciences (see Additional Information below) pertaining to the BP accident and its aftermath, researchers at UCSB have isolated the microbial communities responsible for degrading natural gas and heavier hydrocarbon plumes—ethane and propane—found in the Gulf of Mexico following the Deepwater Horizon spill. Based on stable isotope probing and DNA sequencing, the researchers discovered the advantage that certain cold-loving bacteria have in responding to deep water plumes where cooler temperatures (4°C) prevail.

(January 2013)
This project has been completed. The final report is available below under "Additional Information".

NETL - Robert Vagnetti (Robert.Vagnetti@netl.doe.gov or 304-285-1334)
University of California Santa Barbara – David Valentine (Valentine@geol.ucsb.edu or 805-893-2973)
If you are unable to reach the above personnel, please contact the content manager.

Publications and Draft Manuscripts in Review

Manuscripts Submitted or in Draft Form