The goal of this project is to characterize the large in-place methane hydrate resource on the Alaska North Slope (ANS) and to conduct field and lab studies to determine the potential for methane, produced from hydrate, to become a viable part of the overall energy supply. 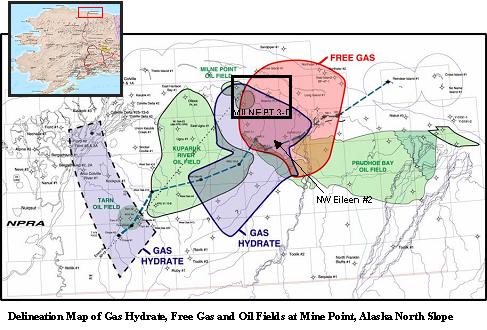 Assessments produced by the U.S. Geological Survey (USGS) have estimated that 85 trillion cubic feet (tcf) of undiscovered, technically recoverable gas resources exist within gas hydrates in northern Alaska. Past USGS assessments indicated 40 tcf of the resource may exist within hydrate deposits below existing oil and gas production facilities. In 2001, BP Exploration Alaska Inc. proposed a state-of-the-art 3-D seismic survey over its Milne Point production unit to provide a starting point for a full evaluation of the feasibility of commercial production from Arctic hydrates.

Efforts under this project were broken into several operational phases.  Phase 1 focused on the evaluation and development of lab, modeling, and field techniques and technologies required for assessment of ANS hydrates and for conducting field-based operations planned in later project phases. Phase 2 focused on actual assessment of ANS hydrate resources and the operational planning for future field testing.  These initial phases implemented fully integrated, detailed geophysical interpretation and modeling; regional geologic characterization of prospective hydrate-bearing units; and advanced reservoir and economic modeling to select a location for drilling, coring, and potential production testing.  Phase 3 concentrated on activities necessary to achieve a long-term depressurization-based field test of methane production from an ANS hydrate reservoir.  Phase 3A included the drilling, logging, and coring of a stratigraphic hydrate test well in the Milne Point Unit (MPU) as a mechanism to verify reservoir characterizations and test techniques and technologies necessary to prepare for a long-term production test planned for  Phase 3B of the project.  Unfortunately, the project did not extend into the long-term production-testing phase.

This project has been a critical first step in determining the commercial viability of methane production from Arctic hydrate deposits. The project has greatly advanced the tools and techniques used to delineate specific hydrate prospects and model their potential productivity and commercial viability. The project also provided, through initial planning efforts, significant insight into what a long-term extended production test of a U.S. gas hydrate reservoir might require and valuable insight into the relative merits of various contemplated production and stimulation methods for gas hydrate.

Assessment and Planning (Phases 1 and 2)

(December 2014)
The project performance period ended on March 31, 2014, and Phases 1–3A are complete. Potential opportunities to conduct a long-term hydrate production test phase under this project were pursued for several years but were complicated by multiple factors.  BP Exploration Alaska and DOE could not find a viable path forward into Phase 3B within a reasonable time period and made a mutual decision to end the project.  The final project report is available below under "Additional Information".

In addition to the information provided here, a full listing of project related publications and presentations as well as a listing of funded students can be found in the Methane Hydrate Program Bibliography [PDF]. Research efforts under this project are complete. The final report is available below under "Additional Information".

2008 ICGH Paper - Analyses of Production Tests and MDT Tests Conducted in Mallik and Alaska Methane Hydrate Reservoirs: What Can We Learn from These Well Tests? [PDF]