The methodology employed in Atlas V is based on volumetric methods for estimating subsurface volumes. Subsurface storage volume estimates depend on geologic properties and storage efficiency. Storage efficiency for this methodology was determined using Monte Carlo sampling, which includes efficiency terms to define the pore volume that is amenable to geologic storage and displacement terms to define the pore volume immediately surrounding a single CO2injection well.

Methodologies used in Atlas V are intended to produce high-level, regional- and national- scale CO2 resource estimates of potential geologic storage. At this scale, the estimates of CO2 geologic storage have a high degree of uncertainty. Because of this uncertainty, estimates from Atlas V are not intended to be used as a substitute for site-specific characterization and assessment. As CO2 storage sites move through the site characterization process, additional site-specific data is collected and analyzed, reducing uncertainty. Incorporation of this site-specific data allows for the refinement of CO2 storage resource estimates and development of CO2 storage capacities by future potential commercial project developers. All data, metadata, and high resolution jpgs are available via NATCARB's Data Download capabilities. For details on CO2 source resource estimates by state, see Appendix C of Atlas V. 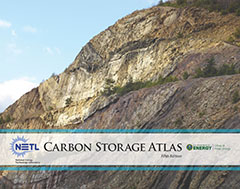 DOE has identified and examined the location of potential CO2 injection formations in different sedimentary basins throughout the United States. These sedimentary basins collected sediments that compacted under pressure over time to become sedimentary rocks. If these sedimentary rocks are porous or fractured, they can be saturated with oil, gas, or brine (saline water with a high total dissolved solids concentration—a measure of the amount of salt in water). If the sedimentary rock is permeable (e.g., many sandstones), it could be a target for CO2 injection. If it is impermeable (e.g., shales), it could act as a confining zone to prevent CO2 migration. The presence of both a reservoir with sufficient injectivity and a seal to prevent migration are necessary conditions for a CO2 storage site.

Oil reservoirs are porous rock formations (usually sandstones or carbonates) containing crude oil that has been physically trapped. There are two main types of physical traps: (1) stratigraphic traps, created when changes have occurred in rock types, and (2) structural traps, in which the rocks have been folded or faulted to create a trapping mechanism. Oil reservoirs are ideal geologic storage sites because they have held the crude oil for thousands to millions of years and thus should have conditions suitable for CO2 storage. Furthermore, their architecture and properties are well known as a result of exploration for and production of these hydrocarbons. In addition, due to the industrialization of these sites, infrastructure probably exists for CO2transportation and storage.

Traditionally, oil is extracted from a reservoir in up to three different phases. The primary recovery phase uses the natural pressure in the reservoir to push the oil to the production well. This process usually accounts for 10 to 15 percent oil recovery. In order to increase this recovery, a process called enhanced oil recovery (EOR) is usually started. EOR involves injecting fluids to sweep the oil to production wells. The secondary recovery phase usually involves injecting water to increase the reservoir pressure and displace the oil toward producing wells. This process produces an additional 15 to 25 percent of the original oil. Together, these two phases account for the recovery of 25 to 40 percent of the original oil, leaving up to two-thirds of the oil in the reservoir. There are many kinds of tertiary recovery, one of which involves injecting CO2 into reservoirs to increase oil recovery. This method has been carried out for more than 40 years. When CO2 is injected into an oil reservoir, it raises the reservoir pressure and increases the oil mobility, making it easier for the oil to reach producing wells. This method, called CO2-EOR, is an attractive option for CO2 storage because, as part of the conventional CO2-EOR operations, a portion of the CO2 is naturally stored and referred to as associated storage.

The utilization of CO2 for EOR in some portions of oil fields could provide the potential for low carbon oil. One promising target is the residual oil zone (ROZ). ROZs have the potential to store more CO2 than is emitted by the use of the produced oil. In all oil fields the main production zones are underlain by an ROZ, in which a substantial volume of oil is present, but the oil content is too low to be produced by conventional processes. In recent years research projects have attempted to utilize CO2 to extract oil from ROZs, with varying amounts of technical and economic success. Additional research and analysis is merited to better understand the viability of this emission reduction strategy, including assessment of the full life cycle emissions profile and consideration of the anthropogenic CO2 source.

Natural gas reservoirs are similar to oil reservoirs in that they are porous rock formations containing hydrocarbons (natural gas) that have been physically trapped in stratigraphic or structural traps. Natural gas reservoirs are ideal geologic storage sites because they have held hydrocarbons for thousands to millions of years, and their architecture and properties are well known as a result of exploration and production activities. Natural gas can occur in oil reservoirs. This natural gas is referred to as "associated-dissolved" natural gas and occurs either as free gas (associated gas) or as gas in solution with the crude oil (dissolved gas). Natural gas also occurs in reservoirs in which there are not significant amounts of oil, and this gas is referred to as "non-associated" natural gas. Historically in the United States, more than twice as much non-associated gas has been produced than associated-dissolved gas from oil reservoirs.

Coal that is considered unmineable because of geologic, technological, or economic factors has the potential for CO2 storage. These factors include coal that is too deep, too thin, or lacking the internal continuity to be economically mined with today’s technologies. Coal preferentially adsorbs CO2 over methane, which is naturally found in coal seams, at a ratio of 2 to 13 times. This property, known as adsorption trapping, is the basis for CO2 storage in coal seams. Typically, methane gas is recovered from coal seams by dewatering and depressurization, but this can leave some methane trapped in the seam. The process of injecting and storing CO2 in unmineable coal seams to enhance methane recovery is called enhanced coalbed methane recovery. Enhanced coalbed methane recovery parallels enhanced oil recovery (EOR) because it provides an economic benefit from the recovery and sale of the methane gas, helping to offset the cost of CO2 storage.

Saline formations are layers of sedimentary porous and permeable rocks saturated with salty water called brine. These formations are fairly widespread in both onshore and offshore sedimentary basins throughout North America and have potential for CO2 storage. Saline formation trapping mechanisms include solubility trapping, mineral trapping, structural trapping, and residual trapping. It is important that a regionally extensive confining zone (often referred to as caprock or seal) overlies the porous rock layer.

DOE is also investigating use of geologic formations of solidified lava, called basalt, as another potential CO2 storage option. The relatively large amount of potential storage resource in basalts, along with their geographic distribution, makes them an important formation type for possible CO2storage, particularly in the Pacific Northwest and the southeastern United States. These formations have a unique chemical makeup that could potentially convert all of the injected CO2 to a solid mineral form, thus isolating it permanently from the atmosphere. Atlas V presents a map of these potential future storage opportunities, but provides no CO2 storage resource values for basalt formations.

Organic-rich shales are formed from silicate minerals, which are degraded into clay particles that accumulate over millions of years. The plate-like structure of these clay particles causes them to accumulate in a flat manner, resulting in vertical rock layers with extremely low permeability. Shales are most often used in geologic storage as a confining zone or caprock though recent investigations have shown potential for select shale formations to be used for CO2 storage. Atlas V presents a map of these potential future storage opportunities, but provides no CO2 storage resource values for organic-rich shale basins.

Offshore geologic storage in the United States is currently being investigated for its potential to serve as one of the options for safe, long-term CO2storage. Offshore geologic CO2 storage involves capturing CO2 from a stationary emission source, transporting the CO2 offshore via a sub-sea pipeline or ocean tanker, and injecting it into a geologic formation deep beneath the seabed where it will remain safely stored (isolated from the ocean water) for hundreds to thousands of years. However, there are a number of knowledge gaps for CO2 storage in offshore geologic formations along the coastal margins of the United States, including limited characterization of offshore CO2 storage potential and no experience in offshore CO2 storage and monitoring.