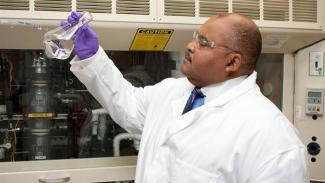 NETL’s McMahan Gray, a physical scientist in Pittsburgh, has been named a recipient of a 2018 Innovation Award from The Pittsburgh Business Times. The honor, to be bestowed at a special ceremony later this year, recognizes extraordinary advances that challenge conventional thinking

Gray is being honored for his work developing an effective, efficient and environmentally friendly technology that can remove carbon dioxide from air, remove lead from water, and recover rare earth elements (REEs) from water and waste streams.

The Pittsburgh Business Times is a popular regional publication that features local business news about Pittsburgh and provides tools to help businesses grow, network and hire. This is the second year that the publication has honored regional innovators, companies and initiatives with its Innovation Awards.

A University of Pittsburgh graduate, Gray created regenerative sorbents that serve as filters.  A sorbent is a material or substance that can collect molecules of another substance by sorption – the physical and chemical process of one substance becoming attached to another.

Gray’s work could have profound impacts. In addition to cleaning air and water, the REEs that the technology can help recover are essential for use in high-technology applications such as cell phones and other consumer electronics, national security technologies, and even future spacecraft environments.

One key application of his work is the development of a home-based water filter that is efficient and can be recycled repeatedly, saving money and resources. The technology can be adapted to treat municipal and industrial wastewater on a larger scale. The home-based application can remove lead that water may pick up as it moves through pipes from previously treated municipal sources to individual houses, and its regenerative/recycling capability makes it environmentally desirable.

While the water crisis in Flint, Michigan, made headlines around the world, contaminated water continues to affect Americans across the country. According to the Washington Post, nearly 40 percent of the states that reported lead test results in 2014 have higher rates of lead.

Major cities like Pittsburgh are often faced with “boil orders” for water as new contaminants are discovered in the water supply. Gray’s product has the potential to be adapted to remove other heavy metals and additional contaminants due to its use of amine-based solid sorbents. This combination of factors gives the technology a unique approach, one with the potential to improve the health of Americans and increase supplies of usable water – critical criteria for a significant new product with far-reaching impact.

Gray’s research has attracted significant attention. He has received the Federal Laboratory Consortium Mid-Atlantic Region Award for Technology Transfer, the Federal Laboratory Consortium National Award for Excellence in Technology Transfer and an R&D 100 Award. He has also received the Hugh Guthrie Award for Innovation as one of NETL’s leading scientists. Most recently in 2018, he was awarded a Gold Medal for “Outstanding Contribution to Science (Non-Medical)” from the Federal Executive Board for Excellence in the Government.