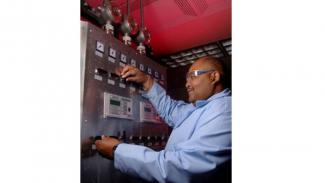 Rare earth elements (REEs) – an integral component of high-technology products from smart phones and lasers to computer hard drives, medical devices and national defense systems – are not that rare, they just appear in miniscule concentrations in a variety of sources, including water. NETL researchers have developed a way to effectively filter water from oil and natural gas well flowbacks, industrial waste streams, acid mine drainage and even municipal drinking water to recover valuable REEs.

According to the U.S. Geological Society, in 2015, global REE reserves were 130,000,000 tons. At the same time, world REE demand is growing at about 8 percent annually.

The work started when researchers began a quest to find sorbents that can separate CO2 from coal-burning power plants streams. Sorbents are materials that are designed to absorb targeted chemical compounds. They are often the most effective way to efficiently capture specific chemicals and gases. Researchers, led by NETL’s McMahan Gray, came up with the basic immobilized amine sorbent (BIAS) process for CO2 capture – an innovation that now has great promise for gathering REEs.

The BIAS process for carbon capture uses low-cost, regenerable, solid sorbents and treated amines. Amines are organic compounds that are derived from ammonia and commonly used in dyes, drugs, gas treatment and corrosion inhibitors. Amines use chemical reactions to enhance their absorption capabilities. The process entails the novel steps of treating an amine compound; depositing the amine onto a porous solid support to formulate a sorbent; using the sorbent to selectively react to elements to be extracted; and regenerating the sorbent by heating it to release captured elements, which also refreshes it for reuse.

According to Gray, the BIAS approach was adapted, and the sorbent modified to collect REEs.

“The BIAS sorbents contain a polyetheylenimine attached to a silica surface using a reactive chemical linker,” he said. “The resulting sorbent resists degradation in targeted waters that contain REEs, which are then captured by the amine groups.”

He said the NETL innovation is significant because of the growing demand for REEs and the need for economically feasible approaches for REE recovery from domestic sources. He added that compared to existing sorbent materials, the BIAS materials developed at NETL for REE recovery are easily prepared, structurally stable, recyclable over multiple cycles, and capable of capturing a variety of REEs from flowing aqueous streams with low REE concentrations.

“These low cost, scalable, and robust materials show promise for commercial-scale processes involving REE capture from flowing streams or stagnant aqueous environments,” Gray said. “In addition, the sorbents do not react to sodium, potassium, calcium, and magnesium that may be in the water. That means they can capture REEs from water sources without interference from unwanted ions.”

Gray received an R&D 100 award in 2012 for the BIAS technology’s carbon capture application. The award is given annually to recognize the top 100 technology products of the year. He said he believes adapting the BIAS approach can have positive results, increasing the nation’s ability to collect valuable REEs, which can support the U.S. economy and national defense abilities.