The project will develop a new technology for the in-line repair of natural gas pipelines. The objective of this project is to design, test, and commercialize a robotic system capable of sealing multiple cast iron bell and spigot joints from a single pipe entry point. The system will affect repairs while the pipe remains in service by traveling through the pipe, cleaning each joint surface, and attaching a stainless steel sleeve lined with epoxy-impregnated felt across the joint. 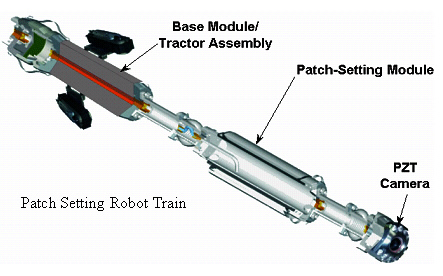 Several older urban areas of the United States still have large numbers of cast-iron gas distribution mains; some 47,000 miles of cast iron pipe is still in service. Individual segments of these mains average between 12 feet and 20 feet in length and are connected to one another by a bell and spigot joint. The annular space between the bell and spigot is filled with a jute packing to provide a fluid seal and finished with a lead or cement plug.

In the days of manufactured gas, the jute material was kept moist and compliant by the humidity and higher molecular weight hydrocarbons present in this gas, and as a result, the joints were usually leak free. However, for many years now, the natural gas flowing in these mains is characterized by its low humidity and high methane purity. This has resulted in the jute drying out and cracking, producing leaks. Local gas distribution companies must extend the useful life of these cast iron mains by finding ways to fix the leaking joints inexpensively.

The robotic joint-sealing system under development here will be comprised of four main subsystems. These are: 1) two sequentially run, multiple-module robot trains; 2) pipe-access hardware for safely admitting into and removing the robot trains from the live gas-main environment; 3) a coiled tubing (CT) delivery system for providing primary locomotion, power and data communications between the in-pipe robot and 4) surface control and display electronics.

The first robot train consists of a front-mounted camera that is used to visually locate each bell and spigot joint, a counter-rotating brushing module whose function is to remove debris from the pipe wall and a final module consisting of a combination base/supplemental locomotion module. In the patch setting mode, the brush module is removed from the train and replaced with the stainless-steel patch-carrier/patch-setting module.

The proposed system will affect repairs while the pipe remains in service by traveling through the pipe, cleaning each joint surface, and attaching a stainless steel sleeve lined with epoxy-impregnated felt across the joint. Coiled tubing equipment will be designed to optimize the push distance from a single pipe entry point. The repair tool provides a means of internal repair of multiple pipe joints and reduces the number of excavations required, thus lowering the costs of cast iron pipe joint repair.

Results:
The complete robotic repair system was successfully tested in full-scale joint patching tests in 12-in. cast-iron joints in the laboratory. The drilling assembly for cutting an access hole through the wall of a gas main was also successfully tested. All components and systems functioned as required and field application of the robotic system is very promising.

and Remaining Tasks:
All experimental work has been completed. The final report has been submitted and approved and the project has concluded. Full-scale field tests of the large-diameter patching system are currently being planned and will be conducted in the second quarter of 2006 in gas mains operated by Public Service Electric and Gas Company.