The overall objective of this project is to increase heavy oil reserves in slope and basin clastic (SBC) reservoirs through the application of advanced reservoir characterization and thermal production technologies. The project involves improving thermal recovery techniques in the Tar Zone of Fault Blocks II-A and V of Wilmington field near Long Beach, CA. A primary objective is to transfer technology applicable to other heavy oil formations of Wilmington field and other SBC reservoirs, including those under waterflood.

Thermal operations at Wilmington were economic when oil prices were lower due to the availability of inexpensive steam that is no longer available. Future expansion of heavy oil recovery projects to other parts of Wilmington field will depend on improving the efficiency and economics of thermal or other enhanced oil recovery methods or by using cold heavy oil recovery techniques. This project may produce 13 million barrels of additional oil, and if these efforts are expanded field-wide, it could add 525 million barrels of production. As mentioned above, the project has also helped improve drilling and completion methods that are applied to the development of all producing zones.

The second budget period phase (BP2) implemented state-of-the-art operational work to optimize thermal recovery processes, improve well drilling and completion practices, evaluate and mitigate adverse geomechanical characteristics of the producing formations, update the 3-D geologic and reservoir simulation models, and utilize the models to identify and drill new well locations. These objectives resulted in further improvement of the characterization of the heterogeneous turbidite sands, identification of the high-permeability thief zones to reduce water breakthrough and cycling, and analyze the nonuniform distribution of the remaining oil-in-place. This work is resulting in the redevelopment of the Tar II-A and Tar V post-steamflood projects by drilling a few new wells and converting idle wells to more effectively drain the remaining oil reserves by improving sweep efficiency and reducing water cuts while minimizing further thermal-related formation compaction. With no steam currently available to inject, efforts are being made to test cold heavy oil production techniques. The project will utilize all the tools and knowledge gained throughout the DOE project to maximize recovery of the oil-in-place.

Benefits
Tidelands is experiencing the most successful drilling in 25 years at the Wilmington onshore oil field area owned by the City of Long Beach. Since 2003, Tidelands has drilled 49 producers, 11 water injectors, and one slurry waste disposal injection well, and has plans in early 2008 to drill 8 producers and 5 water injectors. The 49 producers as of May 31, 2007 have been active from 1 month to 4 years and production well test rates total 3,025 BOPD and 63,140 BGFPD (95.4% water cut). The 3,025 BOPD represents 36% of Tidelands’ 8,422 BOPD operated production in May 2007. Eight wells have been drilled to the Fault Block 3 Upper Terminal zone since 2003 in an area the City of Long Beach had almost given up on as depleted. Initial well rates have ranged from 159 – 1048 BOPD and the wells produced 403 BOPD in May 2007. The company attributes these successes to technologies learned from Tidelands’ two Class III DOE projects (DE-FC22-95BC14939 and DE-FC22-95BC14934).

A highlight from the steamflood project is the sand-consolidation well completion technology that prevents sand entry into the producing wellbore. This new technology offers lower capital costs, provides more operating flexibility, and appears to have higher productivity indexes than other sand-control completions.

Project Summary
The project has experienced several drilling and operational highlights during BP2 based on utilizing technologies learned during BP1.

The 3-D thermal reservoir simulation model was used to drill Tar II-A horizontal producing well UP957 in March 2004 to the best remaining oil-saturated sands in the D1 sands. The well reached peak oil production in April 2004 at 259 BOPD, over 100% better than projected. The well is currently producing 40 BOPD and has cumulatively produced 76,006 BO through May 2007.

The reservoir model and logs from UP957 and a new vertical well UP959 showed oil-depleted steam chests (~20% oil saturation, down from 80% original) in the structurally updip sands of all the steamflooded sands. The model showed that oil would resaturate the steam chests as post-steamflood water injection continued along the downdip flanks of the project. Two new horizontal wells, UP958 and W900, were completed in the updip oil-depleted steam chest areas of the T2 and D sands, respectively, to accelerate the upward migration of hot oil. Well UP-958 was completed into the T2 sands and reached a peak rate of 226 BOPD/1749 BPD gross (87% water cut) in November 2005. Well W-900 was completed into the D1, D1b and D1d sands and averaged 155 BOPD at 93% water cut in November 2005. The two wells are currently producing 109 BOPD and 38 BOPD and have cumulatively produced 109,793 BO and 55,840 BO through May 2007, respectively. These two successful wells show the value of reservoir modeling and the confidence placed on the model results, because it was not intuitive to drill horizontal wells into the oil-depleted steam chests.

The 3-D reservoir simulation model showed that continued operations through the year 2013 would not recover oil from the highly oil saturated Tar II-A D1 sands in the cold, structurally downdip areas south of the steamflood patterns. Recent drilling of replacement Tar II-A downdip flank water injection wells and other new, deeper-zone wells in this area confirmed the very high oil saturations at the top of the D1 sands. When Union Pacific Resources (UPR) developed its Tar II-A waterflood in 1960, this area was avoided because initial vertical waterflood wells had 98-99% water cuts. Instead, UPR concentrated their efforts on the up-structure sands. New horizontal well UP-961 was drilled in November 2005 structurally downdip along the top of the D1 sands to test the oil productive potential of a horizontal completion into the cold tar sands—again a very counterintuitive decision based on past well performance. This well peaked at 185 BOPD and 635 BGFPD in November 2005. The well currently produces 68 BOPD and has cumulative production of 51,519 BO through May 2007.

A vertical steamflood pattern infill well, UP-960, was drilled in November 2005 and found the T sands oil saturated at pre-waterflood levels, even though waterflood and steamflood injectors surround the well, whereas the D1 sands appeared oil depleted. The T sands do not appear resaturated because a temperature survey run before the well was initially produced showed the sands as relatively cold, as if they never were steamed. These patterns were steamflooded for 6-7 years and then hot waterflooded for three years; therefore, it is difficult to understand why the sands are not hot from conductive heat transfer alone. The resistivity log from an offset 1953 well that was completed deeper in the Lower Terminal zone shows similar T sand resistivities to UP-960. The D1 and D3 sands were very hot and exhibited the same oil-depleted characteristics as in well UP-959, only the resistivities were even lower. Based on the So versus Rt chart developed for UP-959 and assuming reservoir temperature of 300° F and 20,000 ppm salinity, the D1 sands (0.7 - 2.0 ohms) had less than 15% So at the top and 40% So at the middle to bottom of the sands. The well was cased to TD, selectively perforated at the tops of the various T sands and the top of the D1 sands, assuming that the remaining D1 oil will migrate and resaturate the top of the sands, and an inner wire-wrapped screen was gravel-packed inside the casing for sand control. The well reached a peak rate of 70 BOPD and 1328 BGFPD in March 2006. The well currently produces 48 BOPD and has cumulative production of 24,059 BO through May 2007.

Tidelands implemented an intensive formation temperature profile and formation compaction study throughout the Tar II-A post-steamflood project from October 2005 to February 2005. The surface lands above the Tar II-A steamflood area started to subside in 1990 at the outset of steamflooding and continued to subside over the seven-year life of the post-steamflood project through November 2005, with specific survey markers subsiding a maximum of about two feet. The surface subsidence occurred where the land is at sea level; therefore it can adversely affect the current structures in the area. The formation compaction study utilized Schlumberger’s Reservoir Saturation Tool (RST) and gamma ray (GR) cased-hole logs to compare with the original induction – spontaneous potential – GR logs for determining the affected depth intervals and extent of thermal-related formation compaction. This study involved running RST logs in thirteen wells located throughout the areal extent of the Tar II-A steamflood. The purpose of the temperature surveys was to map the current reservoir formation temperatures in the steamflooded Tar zone T and D sands and the sands above and below them. Preliminary analysis by Tidelands indicates Tar zone compaction ranging from zero to 6.0 ft from the top of the S subzone to the top of the Ranger F subzone. Generally, the worst compaction occurred between the top of the Du subzone to the top of the D1 sands, with four wells (UP-506, UP175, UP-3 and UP-800) having four feet or more of compaction and five wells (1F-10, UP-413, 2AT-54, 2AT-55, and 1F-6) having two to four feet of compaction. These nine wells are located in the Phase 1, 1-A, and 1-B areas where the D1 sands are the hottest. Three wells along the structural downdip flank, UP-809, UP-833, and 2AT-53, showed minor to no thermal-related compaction from the S to F sands. The post-steamflood water injection rates into the downdip flank injectors are set at 10,000 bpd above the gross production rates to maintain reservoir pressures in the T and D sands. Surface subsidence above the Tar II-A project have continually been reduced since 2003 and preliminary indications in June 2007 are that subsidence has been stopped.

Stanford researchers completed their contract work injecting hot alkaline fluid into formation cores and quart sand vessels to determine if they could duplicate the sand-consolidation empirical process from the field in the laboratory. Initial results did not generate the expected calcium silicate cements. The experimental design assumptions were reexamined, and further testing indicated the calcium silicate cements probably originated from dissolution of wellbore cements used in completing the well. Their results show that it may be possible to add calcium silicate to injected hot alkaline water to consolidate formation sands in a perforated well completion. A second phase of laboratory research to formulate hot alkaline, geochemical solutions to consolidate formation sands was not performed and may occur after the contract termination date, to be covered by Tidelands and the City of Long Beach.

Funding
This project was selected in response to DOE’s Reservoir Class III solicitation, DEPS22-94BC14972/73 (our project contract is DE-FC22-95BC14939), for Slope and Basin Clastic Reservoirs. 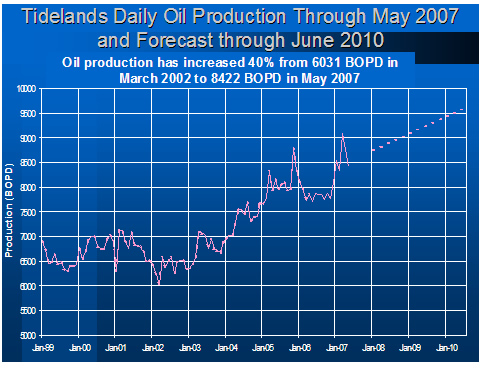