To goal of this project is to improve the detection of fractures in tight natural gas reservoirs.

Most current seismic methods to characterize fractures depend on a few anisotropic wave propagation signatures that can arise from aligned fractures. While seismic anisotropy can be a powerful fracture diagnostic tool, a number of situations can lessen its usefulness or introduce interpretation ambiguities. Laboratory and theoretical work in rock physics indicates that a much broader spectrum of fracture signatures can occur, including a decrease in P- and S-wave velocities, a change in Poisson’s ratio, an increase in velocity dispersion and wave attenuation, as well as indirect imaging of structural features that can control fracture occurrence. Many of these lead to “isotropic” fracture signatures that have the potential for complimenting or replacing some of the anisotropic methods. Many of these fracture signatures can be extracted from conventional 3D seismic data. 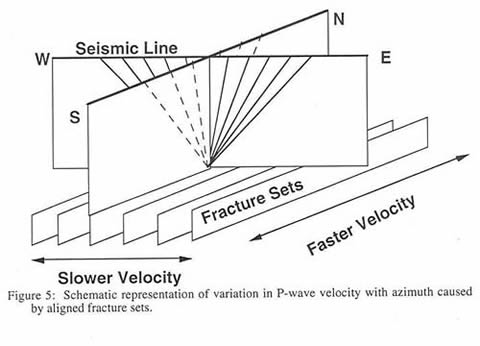 This project developed an integrated strategy to detect and characterize natural fractures in rocks. The approach was to develop a quantitative scheme for integrating the diverse sources of information and to exploit the principles of rock physics as the link among seismic, geologic, and log data.

The project will have an impact on service companies and other seismic contractors, because it provides a new methodology for integrating well log, surface seismic, and wellbore seismic data.

This project established specific relationships that link fracture parameters with their geophysical signatures, by looking at a wide range of data—mainly vertical seismic profiling (VSP), well log, and geologic data—from the James Lime formation in the East Texas Neuville field. Rock physics modeling was calibrated to well logs to determine the seismic signatures of specific types of fractures, and model results were compared with observed fractures imaged by the VSP. The results confirm that fracture networks are visible as particular amplitude and time signatures on the multi-offset, multi-azimuth VSP record. Most importantly, the results show that some of the remaining ambiguity relating to fracture orientation can be better resolved with the spatial and azimuthal coverage allowed by 3D seismic. A statistical formulation was developed to integrate the diverse data types and to quantify the uncertainties associated with fracture detection.

Validation of this new methodology through a small-scale pilot study in the Yates field in West Texas is complete. VSP data (Schlumberger) and well log data (Marathon) from the East Texas James Lime reservoir have been correlated with the fracture density, including a correlation between Vp, Vs, p-impedance, Poisson’s ratio, and Amplitude versus Angle and Azimuth (AVAZ) analysis. Refinement of the interpretation and integration strategy using a 3D seismic dataset is complete. Samples of 3D seismic from Marathon indicate that the same types of fracture-related amplitude anomalies can be seen as were observed with the VSPs. In addition to testing and refining the relationships established using VSP, the use of 3D seismic data allowed more reliable mapping of fracture orientations. All of the data were integrated into a probabilistic model for predicting fracture densities.